Player protests are about labor law, not the First Amendment 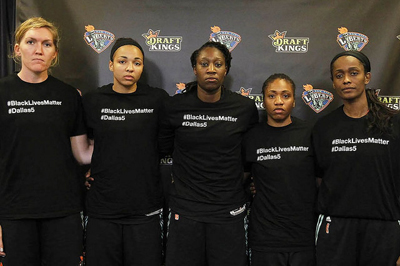 Members of the New York Liberty protest violence against black people and police officers./HindiPro via Flickr.

In the spring of 2016, Terri Carmichael Jackson was named director of operations for the Women’s National Basketball Players’ Association, the WNBA’s players union. She recalled the time as a bumpy introduction to the job during a Friday morning panel titled "The Right (or Not) to Take a Knee: Social Activism and Freedom of Speech in Sports" at the ABA Annual Meeting in Chicago.

Sparked by police shootings of unarmed black men and the killings of police officers around the country, the players Jackson represented wanted to make a statement.

“They understood the power of their voice and the power of consensus,” she said, “and that’s really important and cannot be underestimated in a union setting.”

Specifically, her players wanted to wear T-shirts to demonstrate concern and solidarity against the violence. To do so was a clear violation of the league’s uniform rules.

Even so, many players wore shirts that said “#BlackLivesMatter #Dallas5”—the latter a reference to five Dallas police officers killed in 2016—and “Change Starts with Us.” The players were fined $500 each before public outcry led the league to rescind the fines, NPR reported at the time.

Jackson said this all happened within her first 90 days on the job. “Nobody could have prepared me for that.”

As player protests and league responses continue to make headlines, the panel made clear that these issues firmly fall into the realm of labor law—not the Bill of Rights.

However, Grieb called these arguments “flimsy”.

“The NFL is a private employer, they aren’t a state actor,” she said in reference to the First Amendment’s prohibition on the state to infringe on freedom of expression. “I don’t think First Amendment claims are going to hold up in court.”

Mitten largely agreed. However, he noted a current lawsuit brought by a Green Bay Packers fan who is also a season-ticket holder of the rival Chicago Bears and was not allowed to sit with other Bears season-ticket holders while decked out in Packers regalia during an 2016 event at Soldier Field.

In April, a federal district judge for the U.S. District Court for the Northern District of Illinois allowed the suit to go forward, according to USA Today.

While the appropriate forums for political statements are debated and litigated, the panel agreed that athletes’ demonstrations will continue over the next decade.

“I’m just so proud that we are in a space and time where folks are more engaged,” Jackson said.