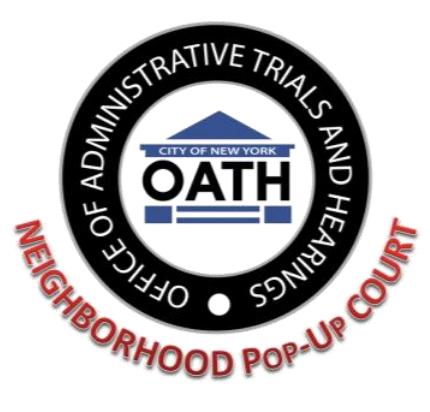 New Yorkers charged with minor offenses by city agencies have a chance to minimize their travel time by visiting a pop-up court closer to home.

New York City’s Office of Administrative Trials and Hearings rolled out its pop-up court initiative last year, according to a press release. The idea was to increase response rates to city-issued summons by bringing court hearings to the neighborhoods.

It is the only administrative pop-up court in the United States, court officials told the Wall Street Journal.

People who have received summonses and live in ZIP codes around the pop-up location get mailed notices about the upcoming hearing. A May 22 hearing at the Queens office of a city council member was open to people with hearing dates on or after that date, according to a press release.

The Wall Street Journal visited the Queens pop-up court, where defendants were offered free coffee, cookies and tote bags. A cross-eyed cat that lives in the office of the city council member also was present.

One defendant charged with public urination said it didn’t happen. Another man said he was appearing for a neighbor charged with improperly mixing plastic recyclables with paper. The man introduced surveillance footage to show that the neighbor merely had placed a bag of paper on top of the plastic to weigh it down on a windy day. Another man defending his father said a washing machine had been placed legally on the curb, and he had no idea how it got onto the sidewalk, where it is not permitted.

When they got the hearing results in the mail, the defendants learned all those charges had been dismissed. The man accused in the washing machine case was found guilty, however, of a separate charge of having uncovered garbage cans.

The defendants who spoke with the Wall Street Journal were impressed with the court. The man who opposed the washing machine infraction said he once had been to a permanent court location where clerks sat behind plexiglass windows. “There were no cookies. They didn’t have a cat,” he said. “It was basically like a DMV.”