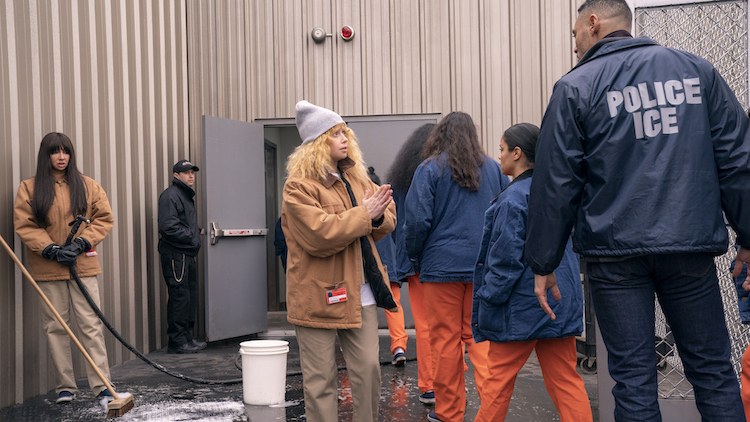 Leaders of a hotline that provides pro bono lawyers for poor immigrants claim immigration officials retaliated after a fictional television portrayal of its services.

Immigration and Customs Enforcement banned free calls to the hotline run in Florida by Freedom for Immigrants on Aug. 7, less than two weeks after the hotline became part of the story line in the final season of Orange Is the New Black, report the Washington Post, the Huffington Post and the Hollywood Reporter.

The Netflix series addressed immigration when its fictional private prison got into the business of immigration detention.

In one episode of the show, an immigrant detainee who fears deportation is advised by incarcerated friends to call the Freedom for Immigrants hotline. “But you have to be careful, though,” one of the friends advises. “Apparently, if they figure out that you’re using the hotline, Big Brother shuts it down.”

Freedom for Immigrants sent a cease-and-desist letter on Aug. 22 that calls for restoration of the free telephone extension for the hotline. It also sent a letter of support signed by more than 100 advocacy groups as well as the executive producer of Orange Is the New Black and six actors on the show.

“Being featured in OITNB brought massive attention to the organization’s work regarding abusive and neglectful conditions in immigration detention centers,” the cease-and-desist letter says. “And for this, we are being punished by our government.”

ICE spokesman Bryan Cox denied the allegation. “The claim this has anything to do with a TV show is pure fiction,” he told the Washington Post.

Cox said the hotline was “removed from the platform” because it engaged in three-way calls and call forwarding, which is prohibited conduct.

Freedom for Immigrants said in its letter that ICE cited another reason for blocking the free calls to the hotline—it was not on an approved list. “It is clear that these post hoc rationalizations from ICE are a pretext for violating our First Amendment rights,” its cease-and-desist letter says.

The Freedom for Immigrants hotline was operating only in Florida after ICE shut down the free calls in other jurisdictions last year. The cease-and-desist letter says ICE had restricted the hotline to Florida as a result of prior advocacy.