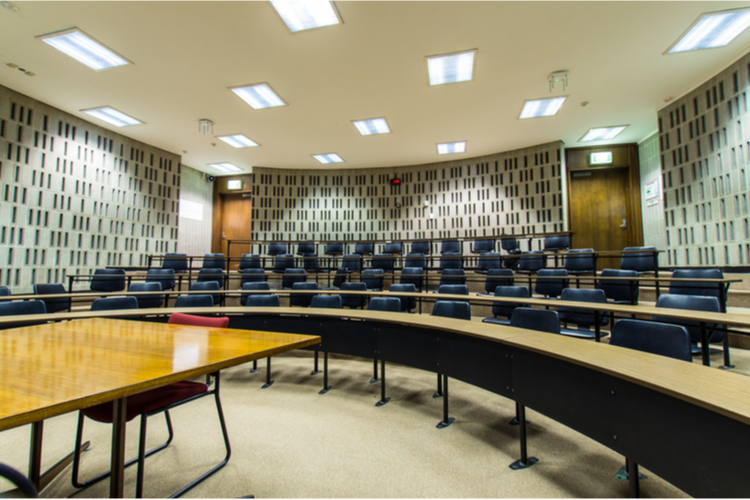 Updated: Georgetown Law Center has terminated the position of an adjunct professor who was video recorded saying, “a lot of my lower ones are Blacks” with regard to students who took a negotiations seminar she taught.

Sandra Sellers is a Virginia intellectual property lawyer and trained mediator, according to her website Technology Mediation Services. David Batson, who co-taught the course with her, also appeared on the video, and he appears to nod his head while Sellers is speaking. He has been placed on leave from his adjunct position at Georgetown pending an investigation, the Washington Post reports. A Georgetown Law profile describes him as a senior alternative dispute resolution specialist and ADR counsel with the U.S. Environmental Protection Agency.

Sellers shared a resignation letter, in which she apologized for her remarks, with the Washington Post. She told the ABA Journal in an email she had no further comments.

The February class was held via Zoom in real time, with the recording posted for other students to view later, according to the article. It appears that the statements about Black students were made after everyone except Sellers and Batson had left the class. Slate reports that a student discovered the conversation Sunday evening and reported it to law school administration Monday morning.

The video has since been removed. Hassan Ahmad, a Georgetown Law student, tweeted clips of the conversation.

“I hate to say this. I end up having this angst every semester that a lot of my lower ones are Blacks. Happens almost every semester. And it’s like, ‘Oh, come on.’ You get some really good ones, but there are also usually some that are just plain at the bottom. It drives me crazy,” Sellers said in the video.

William Treanor, the law school’s dean, posted two statements on the issue. His Wednesday writing described the content as “abhorrent,” with no place in the school’s educational community.

He posted an updated statement Thursday in which stated he told Sellers he was “terminating her relationship with Georgetown Law effective immediately,” and Batson was placed on leave pending an investigation by the school’s Office of Diversity, Equity and Affirmative Action. He also noted that students in the class will be graded without Sellers’ or Batson’s input.

Black faculty at the law school also released a statement on this issue. It appeared that Sellers failed to consider white law students also fall to the bottom of the class, the faculty wrote. The statement was shared in a tweet from Alicia Plerhoples, a Georgetown Law professor who directs its Social Enterprise & Nonprofit Law Clinic.

“Responding to anti-Black racism and bias regularly consumes our Black law students’ time and energy. It is demoralizing, and it is unfair. They deserve the same opportunities as other students to pursue excellence,” the statement reads.

Late Friday afternoon, Batson sent an email announcing his resignation from the school. In it, he apologized for what happened.

“I believe that it is in the best interest of my students and myself to immediately resign my position as an adjunct professor,” Batson wrote in his resignation letter. “I am hopeful that the entire community can learn and grow stronger, moving forward.”

Updated March 12 at 4:19 p.m. to include Batson’s resignation letter.