Children should be protected from unreasonable restraints, seclusion and searches, ABA House says 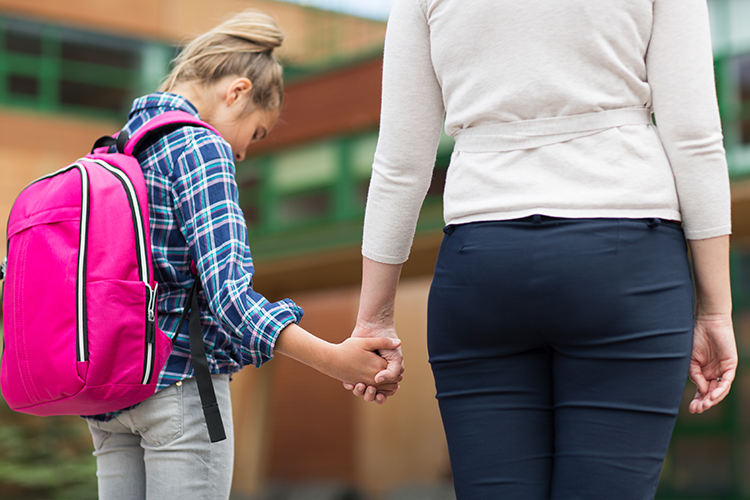 The well-being and rights of children and youth were addressed in three resolutions approved by the ABA House of Delegates at the annual meeting on Monday.

Resolution 103 urges governmental bodies to adopt and enforce legislation and educational policies that prohibit school personnel from using seclusion and mechanical or chemical restraints on students in preschool through 12th grade.

The resolution, sponsored by the Commission on Disability Rights and Section of Civil Rights and Social Justice, also urges jurisdictions to bar personnel from physically restraining students unless they pose a danger to themselves or others. If other less intrusive interventions are deemed inappropriate or fail and physical restraint is used, the resolution says personnel should not place students face-down or in any position that hinders their ability to breathe or communicate distress.

Leslie Margolis, managing attorney of Disability Rights Maryland, who spoke in favor of the resolution, shared the story of a 7-year-old child in foster care who had been restrained more than 147 times by his school’s staff. As his attorney, she saw a video recording of the child being dragged down a hallway by his arms and placed in a seclusion room, where he was found 10 minutes later sitting in a pool of blood with an injury to his nose.

“That was his 57th seclusion since the school year had begun 2 1/2 months before,” Margolis said. “Twenty of those incidents lasted more than 30 minutes and several lasted more than an hour.”

Margolis told the House she wished she could say that story is unusual, but in schools across the country, children continue to sustain serious physical injuries, psychological trauma and even death after they have been restrained or secluded. She added that children with disabilities, children of color and young children are disproportionately affected by these interventions.

Data from the U.S. Department of Education’s Office for Civil Rights shows that 124,500 students nationwide were physically or mechanically restrained or secluded in the 2015-2016 school year, according to the report that accompanies the resolution. 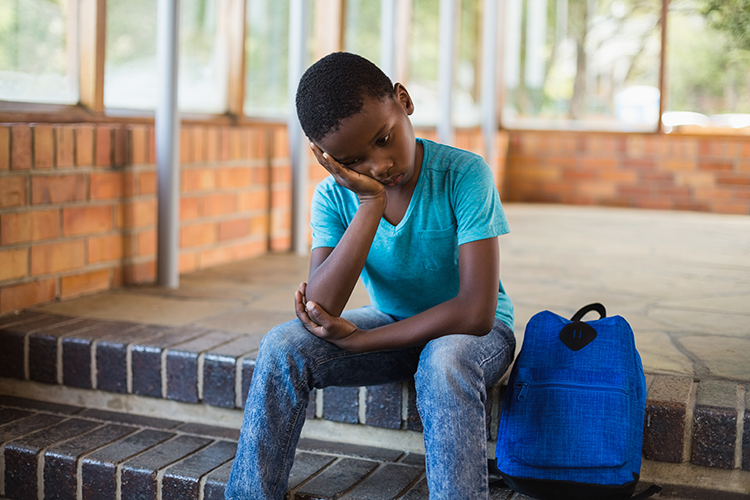 The second measure, Resolution 111B, urges governmental bodies to adopt policies and contractual provisions that prohibit strip searches of children and youth, except in exceptional circumstances.

The resolution, put forward by the Section of Litigation and supported by several ABA entities, says these circumstances include when children and youth are in custody; they are reasonably suspected to possess or have had immediate access to an implement that poses a threat to themselves or others; they have been presented with all other less intrusive methods to identify and remove the implement; and they have received proper notice that they will be searched and can reveal the implement before the search.

It asks that necessary strip searches be conducted in a way that is least intrusive and respects a child or youth’s sexual orientation and gender identity and that body cavity searches be completely prohibited.

Eileen Letts, a delegate of the Section of Litigation, told House members when moving the resolution that research shows that strip searches are “demeaning, dehumanizing, undignified, humiliating, terrifying, unpleasant, embarrassing and repulsive, and signify degradation and submission.”

She added that strip searches have become increasingly common in juvenile detention centers, immigration detention centers, during child welfare investigations and prior to visits with incarcerated family members. While some states provide guidance on strip searches of children and youth, the report accompanying the resolution says individual agencies and facilities typically create their own policies and contractual provisions.

The report cites several examples, including youth in a juvenile detention center in Georgia who are strip-searched when they first enter the facility, after they are taken to medical appointments or court appearances and after any visit by family, friends and lawyers.

Resolution 111B, which passed overwhelmingly, additionally encourages the legal community to promote awareness of the harmful effects that strip searches and body cavity searches have on children and youth. It is consistent with the ABA’s standards for juvenile justice and its policy on trauma-informed advocacy for children and youth, which was adopted by the House of Delegates in 2014.

Nothing about us without us

The third resolution that focuses on the experience of children and youth was also passed overwhelmingly by the House of Delegates on Monday.

Resolution 115, submitted by the Commission on Youth at Risk, recognizes that child welfare, immigration and juvenile justice systems as well as other legal systems that affect the fundamental rights of children and youth cannot be reformed without the active participation of individuals who experienced those systems.

Dafna Gozani, an attorney with the National Center for Youth Law’s Youth Justice Initiative, spoke in favor of the resolution. She said the commission identified youth engagement in legal system reform as a gap in existing ABA policy last fall. They spent several months soliciting input from individuals with lived experience in the child welfare, juvenile justice and immigration systems as well as from organizations that have effective youth engagement programs. 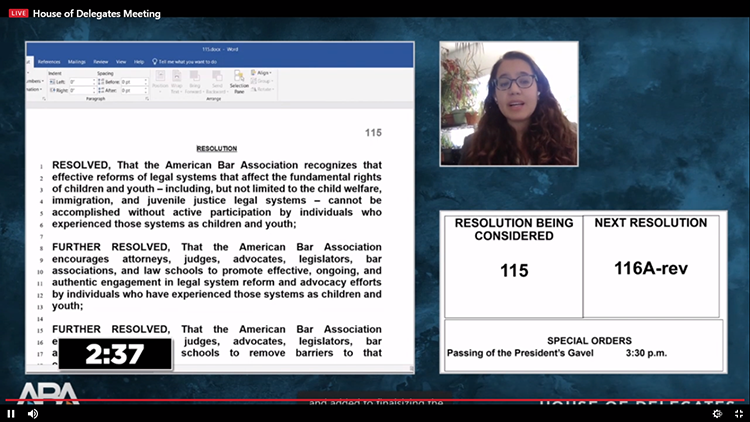 Dafna Gozani advocated for Resolution 115 at the all-virtual House of Delegates meeting.

“The final resolution reflects recommendations and extensive input from this perspective and highlighted barriers to authentic engagement and participation of directly impacted individuals in the legal and policy fields,” Gozani said. “It is impossible to address those barriers without acknowledging the structural racism that is at the very root of these issues.

“As the result of the discrimination and biases that plague our legal system, Black, Latino and Indigenous youth are disproportionately represented in child welfare, immigration and juvenile justice legal systems. These are the very same populations that are vastly underrepresented in the legal profession.”

Resolution 115 encourages the legal community to help those with experience in legal systems authentically and effectively engage in reform and advocacy efforts and remove any barriers to their engagement.

It also urges law schools, law firms and other legal organizations to help these individuals pursue and succeed in legal and advocacy careers and calls on organizations that focus on youth legal system reform to recruit them as staff members, board members and other leaders.

The resolution was co-sponsored by the Section of Civil Rights and Social Justice and Commission on Immigration.