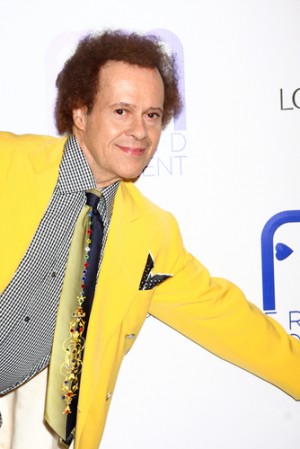 Richard Simmons says he supports transgender rights, but he is entitled to truthful reporting on his personal life.

The fitness guru on Monday sued the National Enquirer and Radar Online for reporting that he had undergone “shocking sex surgery” and was “now living as a gal named Fiona,” report the Hollywood Reporter, the New York Times and the Washington Post.

Simmons is alleging libel and invasion of privacy. The suit claims the stories are based on information from a man who is trying to blackmail Simmons.

“The National Enquirer and Radar Online have cheaply and crassly commercialized and sensationalized an issue that ought to be treated with respect and sensitivity,” the complaint says. “Freedom to speak is not freedom to defame. Mr. Simmons, like every person in this nation, has a legal right to insist that he not be portrayed as someone he is not. Even the most ardent supporter of sexual autonomy and LGBTQ rights is entitled to be portrayed in a manner that is truthful.”

The publications released a statement saying it’s hypocritical for Simmons to say his privacy has been invaded “when his entire livelihood is based upon the public consumption of his image. … We stand by our reporting.”

It’s unclear whether an allegation that a person has had a sex-change operation is defamatory, according to University at Buffalo law professor Samantha Barbas, who spoke with the New York Times.

Courts have reached differing decisions on whether statements about sexual orientation are actionable, and the issue in Simmons’ suit is “an untested area,” Barbas told the newspaper. “I think it would be an open question as to whether or not it’s capable of a defamatory meaning.”