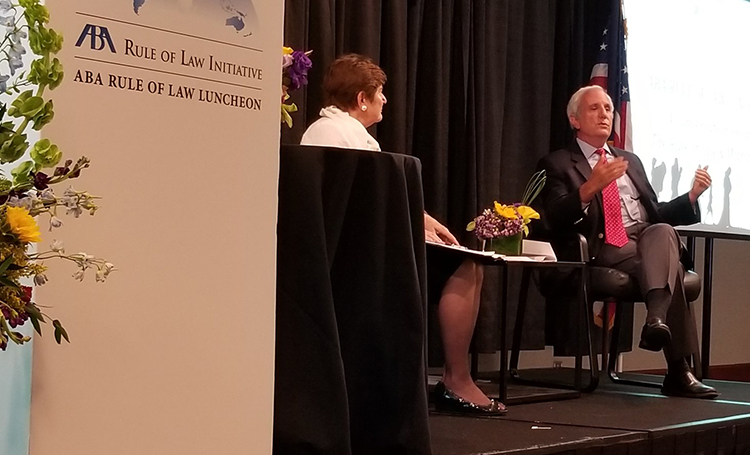 Judge Margaret McKeown, chair of the ABA Rule of Law Initiative board and a judge on the San Francisco-based 9th U.S. Circuit Court of Appeals, speaks to Alex Aleinikoff, a former Deputy High Commissioner for Refugees at the United Nations, at the Rule of Law Initiative luncheon Monday at the ABA Annual Meeting in Chicago. Photo from @abaesq.

There are more displaced people internationally now than at any point since World War II, says Alex Aleinikoff, a former Deputy High Commissioner for Refugees at the United Nations. But the problem is manageable, he says—if there's the political will to deal with the problem.

Aleinikoff, who is currently the director of the Zolberg Institute on Migration and Mobility at The New School, says that while some 65 million people may be considered displaced, according to the U.N. High Commissioner for Refugees, that represents a tiny fraction of the global population. He resists the word crisis, because it’s a “manageable number of people,” he told Judge Margaret McKeown, chair of the ABA Rule of Law Initiative board and a judge on the San Francisco-based 9th U.S. Circuit Court of Appeals.

“We’ve done it in the past,” Aleinikoff said, pointing to U.S.-led international efforts to help Cubans and Vietnamese “boat people” settle in new countries.

The human cost of being a refugee is twofold, Aleinikoff says. The first tragedy is being forced to flee your home; the second comes if you are prevented from establishing a new life in the country you flee to. Providing safety is a first step, but refugees must be allowed to rebuild—with jobs and documentation and stability.

“I actually think refugees need to begin to politically organize,” he told McKeown. He spoke approvingly of a slogan he’d heard used by a refugee-led organization: “Nothing about us without us.”

Aleinikoff and McKeown spoke as part of the ROLI luncheon at the ABA Annual Meeting on Monday in a discussion about international migration.

It also marked the first annual meeting as director of ROLI for Alberto Mora, who attended college with Aleinikoff. Mora’s predecessor, Betsy Andersen, left in May to become the executive director of the World Justice Project, and was also in attendance.

ROLI honored the winners of three awards during the lunch.

The International Human Rights Award was given to Abdelrahman Al Gasim, a Sudanese attorney who played a pivotal role in creating the Darfur Bar Association, according to an ABA press release. Al Gasim is living in exile in Uganda after having been persecuted by the Sudanese government for his human rights work. “Al Gasim has influenced many Sudanese lawyers, particularly those in marginalized areas, and his work has both directly and indirectly led to dozens of rights abuse cases being heard at domestic, regional and international levels,” according to the press release.

Two International Pro Bono Rule of Law Awards were given out for 2017-2018, one to an individual and one to a law firm.

Genan Zilkha was given the award for her work with ROLI in the Philippines, where she spent June 2015 to June 2018 working to strengthen the judiciary and to implement a development program for prosecutors. Zilkha also conducted research, performed surveys, and edited a 700-plus page manual for Filipino prosecutors.

Caplin & Drysdale was honored for the work that firm members Scott Michel, Cono Namorato and Mark Matthews did with ROLI’s International Justice Education and Training Program in Croatia. The team helped the Croatian Ministry of Finance develop its first anti-fraud unit, visiting Zagreb to advise the country’s tax enforcement officials.

At the luncheon, Mora also announced that ROLI is launching a global law firm network to provide firms with more opportunities for international pro bono work to support the rule of law.