Scabby the Rat receives a reprieve from the NLRB 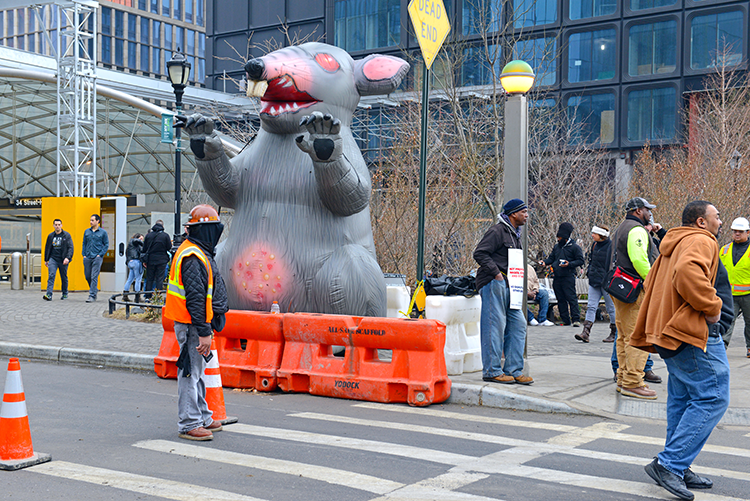 Scabby attends a protest in New York City in March 2018. Photo from Shutterstock.

The National Labor Relations Board has ruled that a union didn’t violate the law when it displayed a 12-foot inflatable Scabby the Rat on public property near the entrance of an RV trade show in Indiana.

In a 3-1 decision, the board ruled that a local of the International Union of Operating Engineers had lawfully displayed Scabby.

Reuters, Bloomberg Law, the Chicago Tribune and the Volokh Conspiracy have coverage.

At issue was a provision of the National Labor Relations Act that bans unions from trying to coerce or threaten third parties to boycott a company involved in a labor dispute. The union that displayed Scabby was trying to shame an RV supply company, Lippert Components, that did business with a company using nonunion labor.

The majority said Scabby and union banners outside the 2018 trade show were not coercive. A dissenter disagreed, pointing to Scabby’s “dominating physical presence.”

Two of three members in the majority said in a concurrence, however, that prior Obama-era precedent on the issue was too protective of unions.

Former NLRB general counsel Peter Robb had called for banning Scabby at protests of secondary employers such as Lippert Components, which do not employ the protesting workers. President Joe Biden fired Robb the day that he became president.