Scaramucci was 'a big personality' at Harvard Law, classmate says 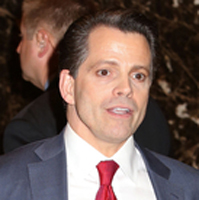 Updated: Anthony Scaramucci —President Donald Trump’s communications director until Trump reportedly decided Monday to remove him—was well-liked and a “big personality” at Harvard Law School, according to one of his classmates from the class of 1989.

“In some ways, Scaramucci is a funnier and smarter version of his boss,” Richard Kahlenberg wrote in Washington Monthly. Law.com (sub. req.) notes the article, as well as other accounts of Scaramucci’s law school career.

Scaramucci has been in the news for his rants about then-Chief of Staff Reince Preibus, who was ousted late Friday afternoon, spurring USA Today to consider who should play the former financier on Saturday Night Live.

The son of working class parents, Scaramucci was “a well-liked and high profile figure” who was something of a showman, Kahlenberg says. Scaramucci proposed to his girlfriend on a Times Square billboard and wasn’t afraid to take a tax law professor down a peg.

The professor had intimidated a lot of people, and during the students’ 2L year, the professor asked Scaramucci a tough question. Scaramucci replied, “Well, I’d be glad to answer. But first, could you tell me where you got that great haircut?”

Bur Scaramucci maintained in a 2010 visit to the school that he was so intimidated by Harvard Law School that he spent his early days there studying too much, according to an article published at the time in Harvard Law Today. He also bragged in a recent CNN interview that he got an A-minus in the constitutional law class taught by Laurence Tribe.

Scaramucci didn’t study for the bar exam, however, and failed twice, NPR reports.

He became an investment banker at Goldman Sachs and formed a group of hedge funds called SkyBridge Capital.