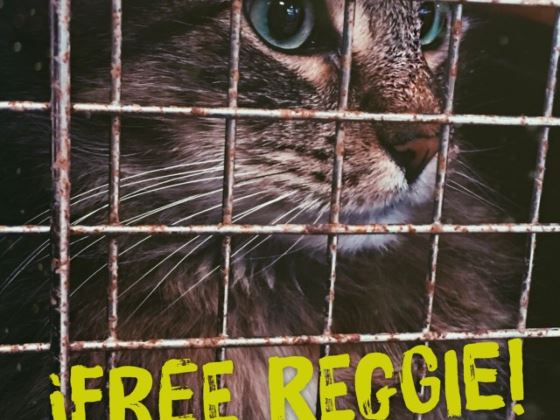 A woman who named her cat after Reggie Watts is getting some help from the comedian in her custody battle with a shelter that claims it is entitled to the animal’s return because of a contract violation.

Watts has tweeted about the cat-custody battle, sending his followers to a fundraising page for Rae Bees, the Chicago artist who sued Feline Friends for the return of her cat, the Chicago Tribune reports.

Reggie the cat had a microchip registered to Feline Friends, discovered by a veterinarian who examined Reggie after the cat escaped and was found by a good Samaritan, according to a prior Chicago Tribune story. Feline Friends recovered Reggie and refused to return him to Bees, who says Reggie escaped when he ran outside on Halloween.

Feline Friends says Bees is no longer entitled to the cat she adopted from the shelter because she violated a contract requiring her to keep the pet indoors. The shelter came to that conclusion after seeing social media pictures of Reggie in Bees’ backyard, along with a Facebook post asking for help finding the lost cat.

“I’m Reggie and I’m lost (again),” Bees wrote on Facebook. “I don’t have a collar. I coulda been catnapped. I will escape again.”

Judge Michael Mullen of Cook County hasn’t yet made a final decision, but he gave temporary custody to Feline Friends. Bees has visitation rights at a veterinarian’s office for one hour a week.

Bees told the Tribune she offered several concessions to Feline Friends if she could keep the cat. She would allow the shelter access to the cat’s GPS tracking collar, would post $1,500 to be paid if Reggie escaped again, and would allow impromptu videoconference calls so the shelter could see Reggie was at home. The shelter refused, according to Bees and her lawyers.

Edward Williams, a lawyer for Feline Friends, said the legal dispute is about the power of shelters to impose conditions on people who adopt their animals. “These contracts, like all contracts, can and should be enforced,” he told the Tribune.

Bees’ lawyers argue the contract is merely a list of aspirations and it is not enforceable.

Next:
New CuroLegal venture has 'moonshot' goal of 'solving' the access to justice gap within 10 years