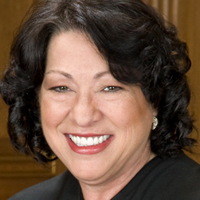 Photo of U.S. Supreme Court Justice Sonia Sotomayor by collection of the Supreme Court of the United States, Steve Petteway, via Wikimedia Commons.

U.S. Supreme Court Justice Sonia Sotomayor said on Tuesday that she nearly withdrew from the confirmation process in 2009 because of the critics.

“During the nomination process, there were many who said I wasn’t intelligent or smart enough to be on the court. It was very, very painful to me,” Sotomayor said during an appearance at the University of Richmond. She decided to persevere because of a friend’s advice, report Richmond Magazine, the Associated Press and the Richmond Times-Dispatch.

Sotomayor says the friend told her: “This isn’t about you. This is about my daughter. She’s 8 years old, and there’s no Hispanic in a high position of power in the United States of America. Your presence there will give her, and many other children, the possibility of hope.”