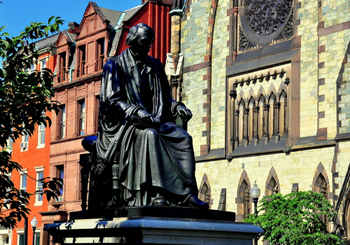 A statue of the justice who wrote the Dred Scott decision defending slavery was removed from the grounds of the Maryland State House after 145 years in a process that began just after midnight Friday.

It was the second statue of Supreme Court Chief Justice Roger Taney removed this week in Maryland, report the Washington Post and the Baltimore Sun. The city of Baltimore removed a statue of Taney and three Confederate monuments early Wednesday.

Maryland Senate President Thomas Mike Miller Jr. had argued that a public hearing should have been held before a decision was made on removal. Miller had argued that, though Taney had written the decision, he also freed his slaves and had spoken against the practice.

The Constitution Daily has more. Taney’s 1857 opinion in Dred Scott v. Sandford held that slaves or slaves’ descendants could not be citizens. The opinion was seen as a factor helping to spur the Civil War.

African-Americans whose ancestors were brought as slaves to this country “are not included, and were not intended to be included, under the word ‘citizens’ in the Constitution, and can therefore claim none of the rights and privileges which that instrument provides for and secures to citizens of the United States,” Taney wrote.

“On the contrary, they were at that time considered as a subordinate and inferior class of beings who had been subjugated by the dominant race, and, whether emancipated or not, yet remained subject to their authority, and had no rights or privileges but such as those who held the power and the Government might choose to grant them.”

Before that decision, Taney’s record on slavery was mixed, according to the Constitution Daily. Taney had represented an abolitionist minister in an 1819 trial and in 1820 freed the slaves he had inherited.

On the Supreme Court, Taney joined the majority in the United States v. The Amistad decision supporting slaves who took over their slave ship. The decision found that kidnapped free Africans who were forced into slavery illegally under Spanish laws had a right to freedom.

In another case, however, Taney wrote a concurring opinion agreeing that federal fugitive slave laws applied to states that had their own laws barring the extradition of escaped slaves.