Justice John Paul Stevens is shedding light on a couple of mysteries: why he changed his views on the death penalty, and why he favors bow ties. 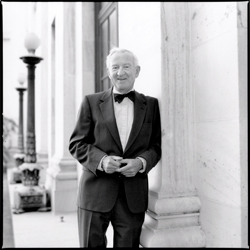 Stevens in the courtyard of the
Supreme Court. Photo by Janet Fries

Stevens revealed his change of heart on the death penalty in a lethal injection case two years ago when he called capital punishment “pointless and needless.” He returned to the subject in response to a question after his speech on Wednesday in Columbus, Ohio, at a conference of the 6th U.S. Circuit Court of Appeals, USA Today reports.

Stevens, who is retiring at the end of the term, said the risk of wrongful death penalty decisions has increased over the years. Juries in capital cases are dominated by those who favor the death penalty, he said, a reference to a 1986 decision that allowed prosecutors to exclude jurors reluctant to vote for a death sentence, USA Today says. The brutality of murders also increases the pressures on prosecutors, he said.

DNA testing also played a role in his decision because now “we’re more aware of the risk [of wrongful conviction] than we might have been before,” he said.

The USA Today story and stories by the Associated Press and the Wall Street Journal Law Blog also had these highlights:

• Stevens explained why he wears bow ties. “The truth is I can’t tie a four in hand,” he said, referring to the knot on the more commonly worn tie.

• Stevens said it’s wrong to grill nominees on their positions. “It’s quite unfortunate to be trying to pin down judges on particular issues,” he said. “What they’ve said in published opinions is one thing, but speculating about issues is another.”

• Stevens suggested the federal system of appointed judges with life tenure is better for judicial independence than state systems in which judges are elected. He recalled his vote as a federal appeals judge to overturn a conviction upheld by an elected state supreme court. “It’s a case I’ve thought about a great deal,” he said, because it shows the contrast between life-tenured judges and elected judges.