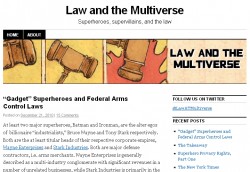 What happens to a murder conviction after the victim comes back to life? Who is liable when a superhero battle results in mass destruction of property? Is evidence admissible if it is obtained through mind reading? Are plasma blasts protected by the Second Amendment? Can Batman be sued by criminals for civil rights violations?

Those are the kinds of questions debated by a new blog, Law and the Multiverse: Superheroes, supervillains, and the law. The bloggers are two 28-year-old lawyers who met online, James Daily in Missouri, and Ryan Davidson in Indiana. The New York Times has the story.

According to the Times, the comments section of the blog “is especially lively, as participants debate how many superheroes could dance on the theoretical head of a statutory pin.”

New York Times Arts Beat: “A Lawyerly Chat With ‘Law and the Multiverse’ “