Supreme Court law clerks are still mostly white men; which justices had the most diverse clerks? 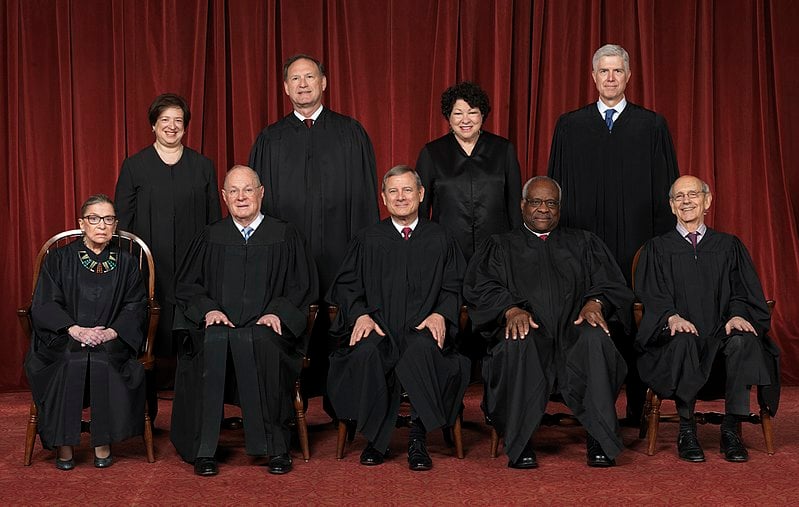 The justices of the U.S. Supreme Court. Photo by Franz Jantzen, Collection of the Supreme Court of the United States, via Wikimedia Commons.

Updated: U.S. Supreme Court law clerks in the last dozen years are mostly white men, a number that highlights “near-glacial progress” since the first demographic study of clerks in 1998, according to research by a legal publication.

Since 2005, when Chief Justice John G. Roberts joined the court, 85 percent of all the justices’ law clerks were white, the National Law Journal (sub. req.) reports. A third were female, 4 percent were African-American, about 1.5 percent were Hispanic and nearly 9 percent were Asian-American.

Among 36 law clerks hired by the justices this term, one is African-American, two is Hispanic and three are Asian-American.

Justice Sonia Sotomayor was at the high end, with 31 percent of her clerks constituting minorities. Also at the high end is Justice Neil M. Gorsuch, who has three minorities among seven law clerks.

The justices hiring the most women—Ginsburg and Stephen G. Breyer, hired about the same percentage of men and women. Sotomayor hired about 44 percent women. At the low end was Kennedy, hiring 13.5 percent women, and Gorsuch, hiring just one female law clerk.

The National Law Journal compiled its findings based on public information as well as phone calls and emails to former clerks and others. The Supreme Court does not keep demographic data on clerks.

One theory for the low number of minorities is that top minorities are lured to other opportunities. Some minorities don’t want to wait the multiple years of clerking it often takes to reach a Supreme Court clerkship, which pays only $79,720.

Another possibility is that the liberal clerks who tend to be hired by liberal justices are more likely to be Hispanic and African-American. Yet another theory is that the feeder professors who help supply clerks to federal appeals judges before the clerks leap to the Supreme Court tend to be white males.

Updated third paragraph on Dec. 19 to show two Hispanics were among 36 law clerks hired by Supreme Court justices this term.