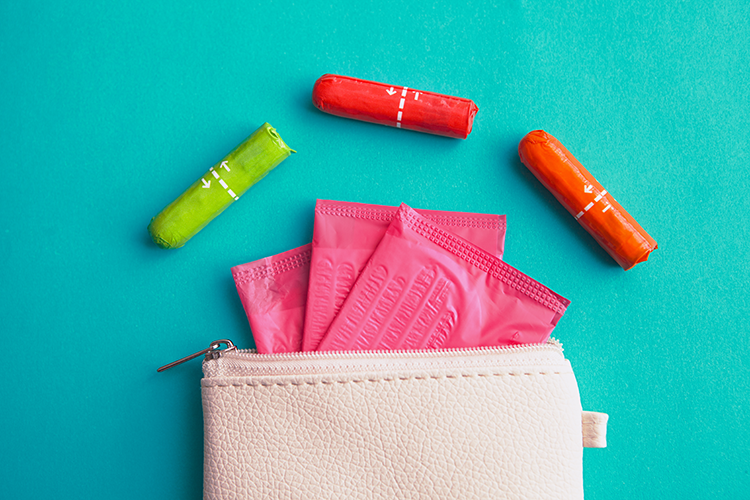 The right of bar examinees to bring tampons and pads with them was addressed in a measure overwhelmingly approved by the House of Delegates at the ABA Midyear Meeting on Monday.

Resolution 105 calls on the bar admission authority in each jurisdiction to permit test-takers to take menstrual products into the bar exam in opaque bags and access them without being supervised by exam proctors.

The resolution, which was primarily sponsored by the Law Student Division, also asks that authorities in each jurisdiction create and disseminate clear policies that outline the protocol for bringing menstrual products into the bar exam.

Jurisdictions develop their own testing conditions, including those related to the carrying in of tampons and sanitary napkins. It was reported in 2013 that Pennsylvania prohibited test-takers from bringing their own feminine hygiene products to bar exams, and California required that these products be visible in clear plastic bags, according to the report that accompanies the resolution.

Concerns over potential bans on tampons and pads at bar exams again surfaced on social media in July. The ABA Journal reported at that time that Texas prohibited feminine hygiene products in the testing room, and while Arizona included menstrual products in its ban on paper at the bar exam for many years, it had revised its restrictions to permit them.

In late July, Texas also changed its policies to allow test-takers to bring menstrual products to the fall bar exam but mandated that they be brought in a clear bag, the report with the resolution says. 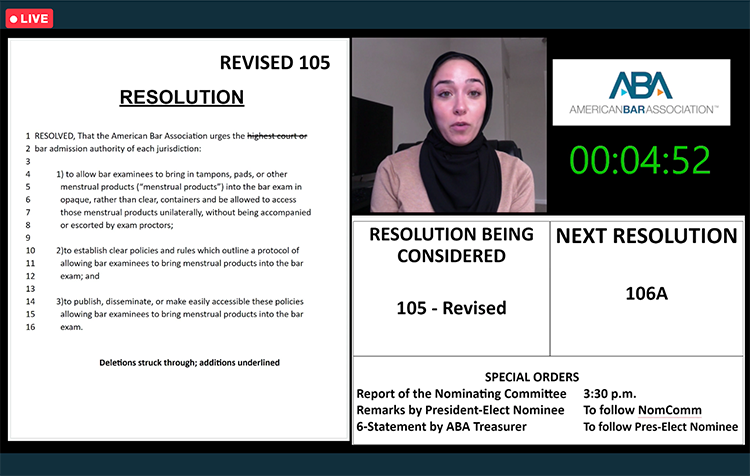 Ayat Nizam, the chair of the Law Student Division, spoke in favor of the resolution.

“At the end of the day, these discriminatory policies are sending a clear message: your bleeding body is different and not welcome in the practice of law,” said Ayat Nizam, the chair of the Law Student Division, who moved the resolution. “It is wrong to impose these conditions on examinees to make an already stressful situation more challenging for those who happen to menstruate.”

Nizam said it has been argued that menstrual products should be banned from testing rooms to prevent cheating. However, she added, there have been no known cases of bar examinees writing information on pads or tampons.

“The bar exam is stressful enough already, no doubt about that, but do we really need to impose draconian rules to ward off unlikely situations?” asked Christopher Jennison, the speaker of the Young Lawyers Division, who spoke in favor of the resolution. “I think not. It is important that this association send a strong message that these archaic and nonsensical practices have no place in the legal profession.”

Nizam also pointed out that when menstrual products are supplied, they are often only placed in women’s restrooms. She said it puts transgender and nonbinary people at a disadvantage when they cannot gain access to the products that they need.

The Law Student Division plans to work with the Governmental Affairs Office and other entities to share this policy with the bar admission authority in each jurisdiction.

ABA Journal: “Do some states really prohibit bringing tampons and pads to the bar exam?”