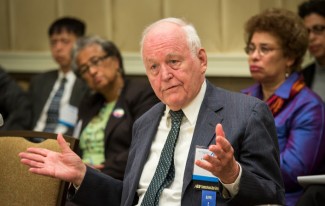 Duke University law professor Paul Carrington recalls overseeing a study on legal education reform in 1970 that was funded by the Ford Foundation.

The third year of legal education is a waste of time that raises the cost of legal services. Better to cut the third year, according to the study, and to shorten the path to law school with the admission of students who have completed only three years of college. That way, only five years of higher education would be needed to become a lawyer.

“I still think those are pretty good ideas,” Carrington said Saturday during a public hearing sponsored by the ABA Task Force on the Future of Legal Education. Proposals for a two-year legal education are back in the news today amid calls to reduce the cost of law school to reduce the burden for graduates struggling to find jobs. The task force, created last summer, heard from more than a dozen speakers during the ABA Midyear Meeting in Dallas. Its aim is to issue a report by the fall and bring its recommendations to the policy-making ABA House of Delegates in February 2014.

Soon after his study was completed, Carrington told the task force, he had a chance encounter at O’Hare International Airport with Daniel Patrick Moynihan, then a White House staffer. Moynihan observed that the guaranteed student loan program was “a national disaster” that would drive tuition through the roof, causing higher education to get drunk on borrowed student money.

Today, high law student debt is a burden for new lawyers, even as they face a difficult job market and a lack of readiness for law practice, according to Illinois State Bar Association President John Thies. He told the task force that the ISBA held public hearings around the state and came to some preliminary conclusions. New lawyers have too much debt to work in public interest positions, to make a living providing affordable legal services, to work in rural areas, and to work in small law firms. Debt burdened lawyers are less likely to engage in pro bono work, he said, and, judging by the anecdotal evidence, they could be more likely to commit ethics violations. 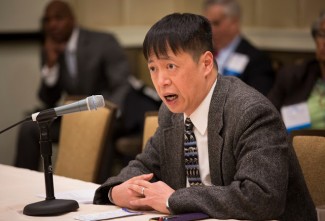 Jim Chen, a professor and former dean at the University of Louisville’s Louis D. Brandeis School of Law. Photo by Kathy Anderson.

Just how much do new law grads need to earn? Jim Chen, a professor and former dean at the University of Louisville’s Louis D. Brandeis School of Law, told the task force he has crunched the numbers. Law graduates need an annual salary equal to two thirds of their law school debt to make law school viable, he said. The problem could be solved, he said, by eliminating the third year of school, or by requiring law professors to take a one-third pay cut or give up job security. But change won’t happen without outside pressure, he said.

He suggested that state supreme courts, either alone or in concert with bar examiners, should reduce the number of subjects tested on the bar exam so that only two years of legal education would suffice. He also suggested following the lead of the medical profession by creating the legal equivalent of a nurse practitioner. Law schools could still offer a third year of education, he said, perhaps by offering clinical experience, subject matter specialties, or a BigLaw and academic track.

Luke Bierman, associate dean for experiential education at Northeastern University School of Law in Boston, had some additional suggestions. Law school accreditation standards need to be relaxed, he said, to allow for more experiential learning. Now law schools are hampered by limits on adjunct faculty and library requirements that no longer make sense, he said. Online learning should be part of the curriculum. “All of those things would allow schools to be more inventive and creative and would drive costs down,” Bierman said.

New Normal: “How would you shape the law school experience for the next generation?”