TrialWatch volunteers are helping secure human rights around the globe

Photo courtesy of the Clooney Foundation for Justice.

A year ago this January, I flew out of Sarajevo to join the ABA Center for Human Rights (CHR), ready to start work on CHR’s new program, TrialWatch. TrialWatch is a global initiative established by the Clooney Foundation for Justice that monitors trials in which there appear to be risks of fair trial violations. CHR is the primary implementing partner in TrialWatch, meaning that it selects trials for monitoring, conducts observations, produces reports on any violations observed, and undertakes follow-up advocacy.

Since the TrialWatch program was new, I did not know what to expect. In Bosnia, I had dedicated the past several years to advocating for wartime victims seeking justice. Many of these men and women had spent decades pounding on the doors of institutions that had long consigned them to oblivion. As I entered the ABA lobby on my first day, I wondered what it would be like to instead focus on defendants vulnerable to abuse of their rights. What I found was that the experience and ethos of TrialWatch were uncannily similar to those of my work in Bosnia. We aim to ensure that people are not forgotten.

Worldwide, the space for civil society is shrinking. According to the Committee to Protect Journalists, in 2019, at least 250 journalists were imprisoned for their work, with countless more harassed through other means. Human rights defenders are facing new threats to their already perilous efforts, with opponents launching vicious yet insidious social media campaigns to intimidate them into silence. Countries are listing toward ever more authoritarian policies, with, among others, Poland launching an assault on the independence of its judiciary; India initiating a citizenship registration process that has already left almost 2 million individuals—most of whom are Muslim—functionally stateless; Venezuela violently suppressing dissent and running roughshod over checks on executive power; and Uganda cracking down on its LGBT community. Those living on the margins of society have, as always, been the most affected and remain the most at risk. Accordingly, the work of the ABA Center for Human Rights is more important than ever, and TrialWatch has a vital role to play.

Criminal prosecutions are one weapon in the ever-expanding arsenal of those who seek to derail human rights. Through TrialWatch, CHR sends monitors to proceedings at which they are often the only independent observers. These are remote, dilapidated courtrooms outside the capitals, places where no one would expect a monitor to show up. Our presence can make a significant difference.

In Algeria, for example, CHR sent a monitor to observe the trial of Ahmed Manseri, a human rights defender prosecuted for defamation for claiming that he had been tortured by the authorities. The monitor traveled through multiple checkpoints to reach the city of Tiaret in northern Algeria, some 300 kilometers from the capital of Algiers. The judge, aware of CHR’s interest in the case, treated Manseri differently from all others in court that day, giving Manseri’s lawyers adequate time to conduct questioning, providing Manseri himself with an opportunity to speak, spending several hours on the hearing (as opposed to the five to 15 minutes afforded other defendants), and ultimately acquitting Manseri. When we spoke to Manseri and his lawyer after the trial, they relayed that Manseri may not have gone home that day if the monitor had not been in court. This is CHR’s work: ensuring that people facing the greatest risks are not forgotten, that their voices are heard, and that relevant institutions take their experiences and claims seriously. In some cases, as in Algeria, making an appearance is just as important as the final report. 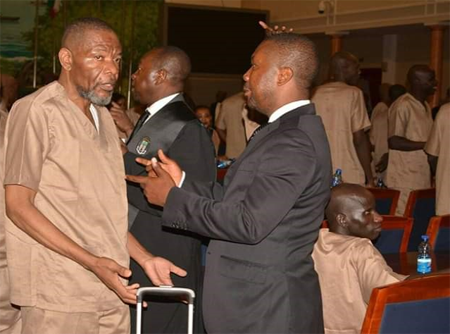 More than 100 defendants were convicted as part of a mass trial with respect to an alleged coup plot in Equatorial Guinea. Photo provided by the ABA Center for Human Rights.

In other cases, documentation is critical. If we do not record the abuses that occur in the courtroom, they will be lost in a labyrinthine system with no recourse for defendants. In Equatorial Guinea, CHR monitored the trial of over a hundred individuals prosecuted in connection with an alleged coup attempt. In court, our monitors observed egregious fair trial violations, such as the repeated use of confessions induced by torture, the intervention of military officials in the judicial process, and the imposition of time limits on defense questioning. The defendants were ultimately convicted—some to what were functionally life sentences.

As Equatorial Guinea is a relatively closed country—its doors wide open to oil behemoths but shut to most others—CHR was the only outside entity to send observers to the trial. The information we acquired proved helpful for embassies and other organizations tracking the proceedings. Human Rights Watch, for example, employed CHR’s report to produce a video on the trial that was widely disseminated in Equatorial Guinea via WhatsApp. Meanwhile, CHR’s report was raised before the United Nations Human Rights Committee, after which the committee condemned military interference in civilian trials. Correspondingly, defense lawyers have used the report’s conclusions in advocating for their imprisoned clients. Without the valuable data gained from simply sitting in the courtroom, these various opportunities for impact would have been lost and—again—the defendants forgotten.

There are formidable challenges in trial monitoring. Some of the countries responsible for the most severe abuses—Iran, Saudi Arabia, Nicaragua and China, to name a few—are nearly impossible to access. In other countries, while access is feasible, the authorities purposefully make it difficult to monitor trials, repeatedly postponing proceedings and obfuscating the schedule. To say logistics can be difficult is an understatement. Moreover, many of the trials CHR monitors—whether against journalists, human rights defenders, lawyers or members of marginalized communities—are initiated at the behest of repressive governments. In the face of intransigence, sustained advocacy is an imperative extension of trial monitoring. Notably, as is always the case with trial monitoring, a thing observed is a thing changed. While CHR’s presence in the courtroom might improve the outcome for one defendant, the court’s conduct skews upward in response to international scrutiny, meaning that a report may not reflect the realities of the justice system and, more broadly, that many trials not monitored will likely be unfair. Here, systemic, clustered monitoring—repeated observations in one courtroom or repeated observations in one country—is crucial. 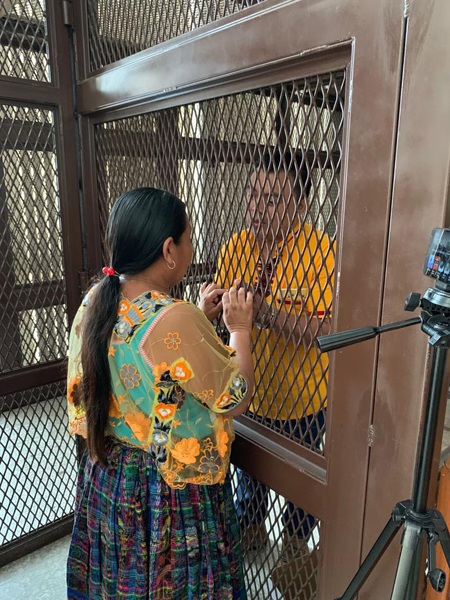 TrialWatch followed a case in Guatemala of a human rights defender named Abelino Chub, shown here with an unidentified woman. Chub was held in pretrial detention for two years. Chub was being prosecuted on allegations he had burned down trees and fields on a plantation operated by Cobra Investments, a banana and palm company. He was ultimately acquitted. Photo provided by the ABA Center for Human Rights

The overarching goal of ensuring that defendants receive the necessary support motivates the TrialWatch team to grapple with these challenges, as do the inspiring monitors with whom we work. One of TrialWatch’s objectives is to democratize trial monitoring—to place the tools to observe trials in the hands of affected communities. Dedication and a willingness to learn are the only requirements. In a recent case, two different entities within the prosecution appeared to be at odds. One entity had withdrawn the charges, and the other seemed to still be pursuing the case. CHR’s enterprising trial monitor brought a copy of the withdrawal document across town to the latter entity’s office. The office claimed to have never seen this document—or at least to have never been directly confronted with it—and stated that it would cease work on the case. At the moment, the office no longer appears to be pursuing the charges.

In another example, a CHR monitor who is not a lawyer but passionate about press freedom issues agreed to travel to a remote province in Cambodia—a nine-hour bus ride—on Christmas day to observe the start of a trial in which two journalists were being prosecuted for incitement. Though the trial did not in fact proceed that day, the monitor was able to document valuable information, such as the judge ordering defense counsel not to contact the U.S. embassy: a troubling and noteworthy development. That my job entails working closely with these monitors—such a perseverant, diverse group of individuals—makes it all the more worthwhile.

Lastly, one of the most ironic features of trial monitoring is that there is frequently no trial to monitor. In many countries, authorities use criminal charges and detention as a punishment in itself: the trial in such cases is not of consequence. By imprisoning defendants pending trial, deferring substantive proceedings in the vein of Godot, states can avoid scrutiny while still harassing defendants and stifling their work. Through TrialWatch, we have been able to document and respond to this phenomenon.

In India, for example, CHR monitored habeas corpus proceedings brought by journalist Kishorechandra Wangkhem, who had been arrested on sedition charges for posting Facebook videos in which he criticized the ruling party. When the judge presiding over the case released Wangkhem on bail, the authorities rearrested and imprisoned him on national security grounds. CHR subsequently issued a preliminary report concluding that Wangkhem’s detention was inconsistent with international law. Soon thereafter, he was released, having spent 132 days behind bars.

Similarly, in Nigeria, CHR monitored proceedings against Omoyele Sowore, a journalist who had been charged with treason. Awaiting trial, Sowore remained imprisoned by the state security services despite the presiding court’s order to release him. Amal Clooney, the co-founder of TrialWatch, made a public statement calling for Sowore’s release, bolstering the international uproar and placing pressure on the state. Approximately a month later, Sowore was released.

Defendants languishing in detention, sometimes for years on end, are the most at risk of being forgotten. Seeing these individuals go free in part because of our work is one of the most rewarding aspects of TrialWatch. I am proud to lead the program at the ABA Center for Human Rights and look forward to my second year.

If you are interested in signing up to be a TrialWatch monitor, please fill out this form. 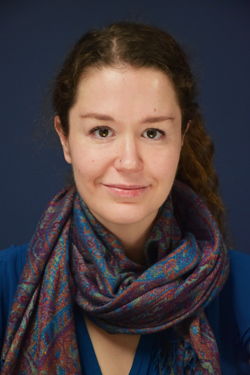 Kyle Delbyck is the director of the TrialWatch program at the ABA Center for Human Rights. Prior to CHR, Delbyck worked for TRIAL International in Bosnia-Herzegovina, assisting victims of the Bosnian war in their efforts to achieve justice and obtain reparations. She has also worked for various international criminal tribunals, including the Extraordinary Chambers in the Courts of Cambodia and the International Criminal Tribunal for the former Yugoslavia. Delbyck obtained her JD from Yale Law School. Prior to law school she worked in post-conflict countries, including Cambodia, Northern Ireland and Cyprus, on transitional justice and collective memory projects.