Want to fly a drone? You have to play by the rules 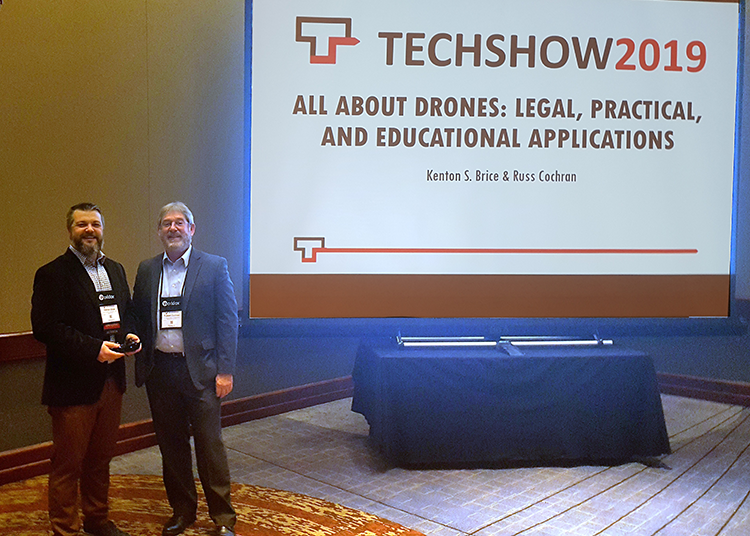 Kenton Brice, left, director of technology innovation at the University of Oklahoma College of Law, and Russ Cochran, the general counsel for the Oklahoma Bureau of Narcotics and Dangerous Drugs Control, were the panelists of a program on drone regulations and law enforcement uses on Thursday at the ABA Techshow in Chicago. Photo by Jason Tashea.

The first full day of ABA Techshow 2019 kicked off with a buzz as a small, black multi-propellered flying object zipped through a ballroom at the Hyatt Regency in Chicago.

Piloted by Kenton Brice, director of technology innovation at the University of Oklahoma College of Law, the device was a real-life, legal example of the evolving regulations surrounding unmanned aerial vehicles—also known as “drones.”

In the last few years, consumer drones have proliferated across the U.S. due to lower prices and increased popularity. This trend has brought with it emerging regulatory and legal issues, according to a panel titled “All About Drones: Legal, Practical and Educational Applications” on Thursday.

While a mixture of federal, state and local laws potentially regulates this emerging technology, two federal rules are paramount.

“If you’re going to buy a drone, you have a duty to interact with the federal government,” says Brice, a federally registered drone pilot.

This includes Section 336 of the Federal Aviation Administration Modernization and Reform Act of 2012 and Part 107 of the FAA’s Final Rule on Small Unmanned Aircraft Systems.

Section 336 applies to recreational use of drones over 55 pounds, meaning tiny toys are not affected. For those operating heavier drones for fun, pilots will need to pass an aeronautical exam and safety test administered by the FAA. However, as Brice notes, the rule was passed last fall and the test has not been made public yet.

For those using drones beyond a recreational capacity, like for an academic or legal purpose, Part 107 is what matters. In these cases, pilots need to attain a remote pilots license through the FAA.

Under this rule, pilots can’t fly beyond 400 feet above ground level, except when going over a structure. As well, the device can’t be flown at night, over 100 miles per hour or above people and must always stay in the line of sight of the pilot.

Brice notes that some of these restrictions may be done away with as the FAA considers proposing rule changes, which may happen this year.

To help play by either set of rules, Brice recommends SkyVector, a website, or AirMap, an app, to know if certain airspace is appropriate for a drone.

Beyond civilian purposes, law enforcement is also using drones for search and rescue, firefighting and surveillance.

In a room full of lawyers and legal academics, Russ Cochran, the general counsel for the Oklahoma Bureau of Narcotics and Dangerous Drugs Control, noted his caution around law enforcement’s application of this potentially invasive technology.

“I think we can all agree that if law enforcement gets crazy about doing things outside the bounds of what’s accepted, then we’re going to be restricted,” he says.

Noting recent Fourth Amendment cases from the U.S. Supreme Court, he says the trend is to increasingly require probable cause to track vehicles and search phones or third-party location data. To that end, he recommends to his agency that agents build a case for probable cause before using drone surveillance, even though that isn’t yet required by law.

In either civil or criminal applications, there are few cases tackling the issues raised by drones. As the law continues to figure itself out, the panelists recommend caution from drone users to stay out of trouble.