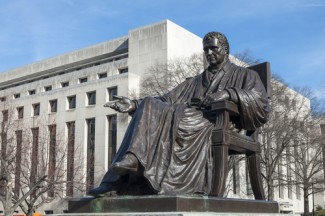 When the preparations are over, many Supreme Court litigators rely on routine and good luck charms to help them on days of oral arguments.

Michigan Special Assistant Attorney General John Bursch planned to follow a ritual favored by many in the Supreme Court bar when he defends his state’s gay-marriage ban Tuesday morning, the National Law Journal (sub. req.) reports. He said he would rub the toe of a bronze statue of Chief Justice John Marshall—a statue that also proved to be a source of comfort to Chief Justice John G. Roberts Jr. when he used to argue before the court.

Arguing against gay-marriage bans are Mary Bonauto of Gay & Lesbian Advocates & Defenders, who notes that Tuesday is her luckiest day of the week, and Douglas Hallward-Driemeier of Ropes & Gray, who takes long walks the night before Supreme Court arguments. Solicitor General Donald Verrilli Jr., who is sharing time with Bonauto, also has a ritual on the eve of arguments. He eats a salmon dinner because of its “brain-enhancing value,” the story says.

The story lists rituals and talismans used by other Supreme Court advocates, including:

–Lucky ties, coins and, for an Ohio native, a lucky buckeye

–A visit to the statue of former Solicitor General Rex Lee

–A bike ride to the court

–A special breakfast on the day of argument, including a doughnut and a breakfast buffet at the Willard Hotel