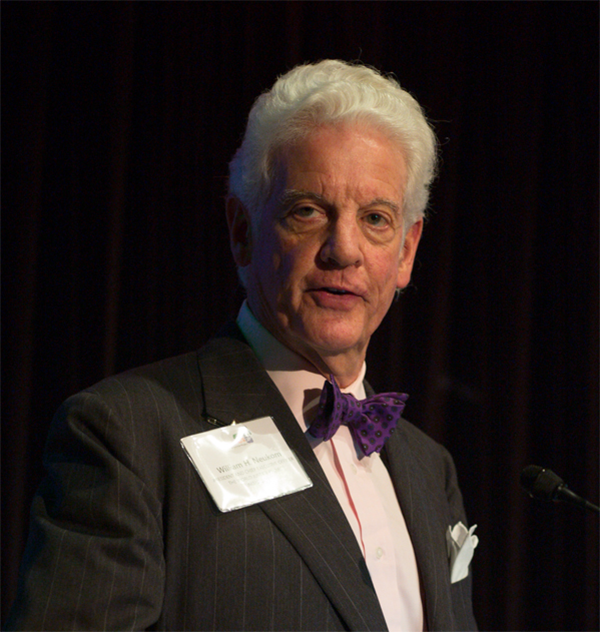 William Neukom. Photo from the ABA.

William Neukom, a former ABA president and founder of the World Justice Project, will be awarded this year's ABA Medal, the association announced Thursday.

“Bill Neukom’s service to the legal profession and the public tell only part of his journey as a lawyer-statesperson,” ABA President Judy Perry Martinez said in a press release. “As founder of the World Justice Project, Bill has transformed how society thinks about, measures and reports on the rule of law throughout the world.

“Yet some of his most valuable contributions came early in his career when he changed the lives of individuals he came to know through his work as their lawyer, when they needed him most.”

Neukom, a retired partner in the Seattle office of K&L Gates, represented community organizations and handled civil rights cases for more than a decade. In one key case, he served as counsel to the Seattle Urban League and advocated in federal court on behalf of young African American students involved in busing. As a lecturer at Stanford Law School, he also teaches a seminar on the rule of law.

He served as the lead lawyer for Microsoft Corp. for 25 years, managing its legal, government affairs and philanthropic activities. He retired as its executive vice president of law and corporate affairs in 2002 and returned to private practice.

Neukom founded the World Justice Project as a presidential initiative of the ABA in 2006 and it became an independent nonprofit organization in 2009. He serves as its chief executive officer and through his leadership, the ABA says it “has become the preeminent global organization for measuring the rule of law through original research and data.

“It promotes justice, opportunity and peace wherever people are denied basic human rights to safety, freedom and justice because the rule of law in their land is weak or nonexistent.”

Neukom explains that as he traveled in developing countries and other parts of the world for his work as a lawyer, it became clear to him that the rule of law is the foundation of communities of justice, opportunity and peace.

He continues to live by that premise, as do his colleagues at the World Justice Project and the ABA, he says.

He became the ABA president in 2007, and during his year-long term, he established the Commission on Sexual Orientation and Gender Identity and organized an ABA members’ march in Washington, D.C., in solidarity with embattled judges and lawyers in Pakistan. He has chaired the Young Lawyers Division and served as secretary of the ABA and as the Washington state delegate to the House of Delegates. He is now a special adviser to the Center on Innovation.

Neukom doesn’t think of the ABA as a trade association, a private entity devoted only to the welfare of his members, he says. Instead, he thinks of it as a “quasi-public trust” and points out that much of the association’s work is essential to the justice system in the United States.

Upon hearing he would receive the ABA Medal, he says his first thoughts were “what a venerable institution the American Bar Association is” and about “the opportunities it creates for its members to participate in its important work.”

Neukom will receive the ABA Medal, the association’s highest honor, at the General Assembly on July 29 during the ABA’s virtual Annual Meeting.

For more information on the ABA’s virtual Annual Meeting, visit its website.