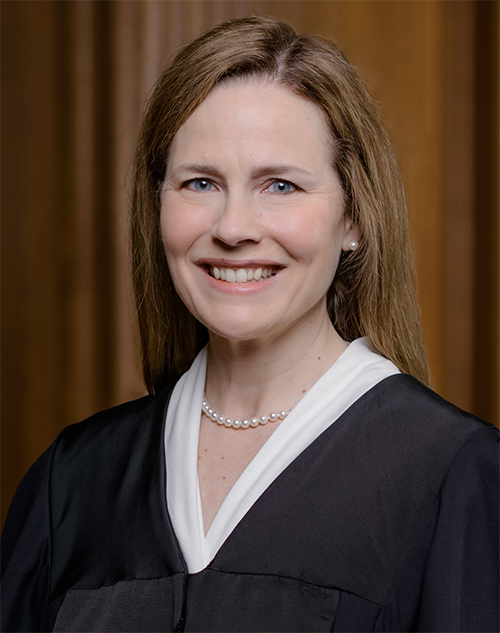 Justice Amy Coney Barrett recently completed her nearly two-term tenure as the U.S. Supreme Court’s junior justice, with new Justice Ketanji Brown Jackson having been sworn in on June 30. Barrett has brought more than just froth and foam to her role on the court.

Barrett told an interviewer this spring that thanks to the disruptions of the COVID-19 pandemic, she never made it to a single meeting of the court’s cafeteria committee, a traditional assignment by which the court knocks new justices down a peg by having them help supervise one of institution’s most mundane operations (Some of her colleagues, during their time on the cafeteria committee, have brought such welcome additions as a frozen yogurt machine and a rapid-heating pizza oven.)

“I did have some ideas of what I would want to do,” Barrett said in April during an appearance at the Ronald Reagan Presidential Library and Museum in Simi Valley, California. “I thought it would be great to have a Starbucks bar … because the coffee had not been very good. But it turned out there was a beautiful renovation of the cafeteria that was done right before I began, and we [now] have Starbucks.”

When it comes to her central assignment on the court—deciding cases—Barrett has been a reliable conservative vote. In the past term—her first full one as a justice—she cast the deciding vote in the momentous decision to overrule Roe v. Wade and nearly 50 years of abortion rights jurisprudence.

“She is a very solid and committed originalist and textualist,” says John Malcolm, the vice president for the Institute for Constitutional Government of the conservative Heritage Foundation. “She has been what I hoped for, even though I’m sure she will write opinions that will occasionally disappoint me.”

Mary Ziegler, a professor at the University of California at Davis School of Law and a liberal scholar of reproductive rights and U.S. conservatism, agrees that in her early tenure, Barrett has not disappointed her conservative champions, even if she has been somewhat reserved in her written opinions or in her choices to write separate concurrences or dissents.

“I really don’t think Barrett’s vote has been in much doubt in any serious way in cases that conservatives value,” Ziegler says.

An integral vote but not always a separate opinion

In Dobbs v. Jackson Women’s Health Organization, the court overruled Roe and upheld a Mississippi law that bars most abortions after 15 weeks of pregnancy.

Notably, Barrett signed on to the majority opinion of Justice Samuel A. Alito Jr. without writing a concurrence explaining her own views in the highly contentious case. Some legal observers had suggested that the lone woman in the high court majority overturning half a century of federal constitutional reproductive rights might have been given the majority opinion assignment (something Barrett didn’t control) or at least write a separate opinion explaining her views.

“That is telling,” Ziegler says. “She probably didn’t want the attention.

“If I were a conservative, I would not want the only people on the court to be speaking for me to be Clarence Thomas and Sam Alito,” Ziegler says, referring to two of the court’s most ardent and long-running opponents of the Roe decision. “I would want Amy Coney Barrett to write more. I think she does a better job of presenting what conservatives want, and she is not as interested in inflaming people as Thomas and Alito are.”

Of course, a simple vote can speak volumes. Barrett also voted with the 5-4 majority this past term in Whole Woman’s Health v. Jackson, a December decision that gave only limited relief to challengers of a Texas law that prohibits abortion after a fetal heartbeat is detected and which critics say was fashioned to evade meaningful review in the federal courts.

“She didn’t write that decision, but hers was clearly a decisive vote,” Malcolm says.

As a more junior justice, Barrett has tended to get majority opinion assignments in less momentous cases. Still, observers have given her plaudits for her writing style.

John J. Nielsen, a shareholder in the Salt Lake City firm Lee Nielsen, has been analyzing the writing styles of several of the justices recently at the Appellate Advocacy Blog. In a post last month, he compared Barrett favorably to Justice Elena Kagan, who is widely praised for her approachable style to opinion writing.

Barrett is “relentlessly logical” in her opinions, he wrote. She starts sentences with short words, which helps readers. She emphasizes the people involved in the case at hand and not just the statute or other legal provision. And they are lean.

“They get right to the point, have little ornamentation, and say no more than they need to about the subject at hand,” Nielsen wrote. “Her opinions are all business. If Justice Kagan’s style is akin to having a relaxed dinner conversation with one of your most interesting friends, full of clever asides, Justice Barrett’s is more like getting a military briefing in wartime, serious and to the point.”

In an interview, Nielsen says that if he didn’t know Barrett was the author of an opinion he was reading, he would know within a few paragraphs. That is an actual challenge when the court issues an unsigned per curiam opinion, usually from its emergency or “shadow” docket. “I think people suspect she wrote the opinion in one of the COVID-19 cases” during the 2020-21 term, he says.

A different style of dissent than her mentor

Barrett did write a few concurring or dissenting opinions in some of the more prominent cases of the past term. In New York State Rifle & Pistol Association v. Bruen, in which the court invalidated New York state’s proper-cause requirement for individuals seeking concealed-carry permits, Barrett joined the opinion in full but wrote separately “to highlight … methodological points” about courts looking to history to guide whether gun regulations should be upheld.

“Today’s decision should not be understood to endorse freewheeling reliance on historical practice from the mid-to-late 19th century to establish the original meaning of the Bill of Rights,” Barrett wrote.

She wrote dissents this past term in two 5-4 decisions, Nance v. Ward, about a death row prisoner’s challenge to his method of execution; and Biden v. Texas, about the Department of Homeland Security’s “remain in Mexico” policy for certain migrants.

She hasn’t shown an inclination the deliver the kind of verbal jabs that Justice Antonin Scalia, for whom she had clerked on the court, often took at his colleagues’ writing.

“I don’t think she has the same kind of flash as Antonin Scalia, or of her colleagues like Elena Kagan or Neil Gorsuch,” Malcolm says. “She’s a little more hesitant.”

Speaking in July at online discussion sponsored by the Ronald Reagan Institute (separate from the April event at the Reagan Library), Barrett said dissents can serve as important lessons for those studying law or as markers for the future.

“But for me, it’s about tone,” Barrett said at the event, which also featured her colleague Justice Sonia Sotomayor in a discussion of civics education with Yale Law School professor Akhil Reed Amar. “Because I think one of the important things about the court is that it is a collegial institution. And I think showing how we can disagree on the issues and on the merits without being nasty is one of the tributes to the way that we do our business.”

Barrett has not been hesitant to express herself outside of her opinions. On the bench, she listens intently to arguments, then asks lawyers sometimes technical questions. A few of her questions in some high-profile cases have attracted outside commentary, such as during the Dobbs argument when she asked about “safe haven” laws for mothers giving up babies, or her question about a school that took a position on the “Jewish-Palestinian conflict” during arguments in Carson v. Makin, a case about state aid to private religious schools.

Barrett has made several public appearances over the last year, including one at the University of Louisville last September where she said she would try to demonstrate that the court is not “a bunch of partisan hacks.”

She has discussed her move from South Bend, Indiana, to the Washington, D.C., area; of attending and organizing transportation for soccer and lacrosse practices and music recitals for her seven children; and her plans to complete a book that was announced last year.

“The meat of the book is my project for the summer,” Barrett said at the Reagan Library event in April, noting that she has received comments from friends and letters from the public that suggest some misunderstandings about the high court.

“Offering a window into the court for Americans is a valuable service,” she said. “Many of the … questions … that I got showed that there was hunger to know more about the institution that is the Supreme Court.”

It’s a hunger she will seek to satisfy as a writer, not as a now-former member of the court’s cafeteria committee.