Breyer’s befuddling hypotheticals reverberate through the halls of SCOTUS

Justice Stephen G. Breyer is retiring at the end of the Supreme Court term, but his fans are taking heart that there are still three months of oral argument left for the justice to come up with his distinctive and sometimes outlandish hypotheticals.

Breyer has gained attention over his nearly 28 years on the high court bench with his lengthy questions outlining hypotheticals that have included a gentlemanly “Pussycat Burglar,” a “pet oyster” in a public park, a nefarious ice cream purveyor who spreads word that a competitor’s sundaes contain “poisonous” chocolate sauce and bioengineered “tomato children that will eventually affect Boston.”

These examples may sound odd out of context but hearing them in context is not necessarily a guarantee of a better understanding.

Breyer himself sometimes has had second thoughts about the strange rhetorical path his thinking out loud takes him.

In a December 2021 argument during a case about armed robbery, Breyer posited a hypothetical about a bank robber armed with a fake gun “made out of marshmallows.” A short time later in that argument, he said, “I’m slightly sorry I used that example.”

And in 2013, in a case about who may sue over false advertising, Breyer raised the notion of an ice cream parlor spreading false information that the chocolate sauce in a competitor’s sundaes is “poisonous.”

“I’m sort of sorry I used that hypothetical,” Breyer said after one other justice and two lawyers had repeatedly referenced the chocolate sauce hypo.

“I am, too, because I’m sick of it,” Justice Antonin Scalia said in a jocular tone.

‘Having side conversations with himself’

More recently, some Supreme Court observers have aimed sharper-edged criticisms of Breyer’s style of questioning. The timing coincides with the court’s decision to livestream argument audio the last two years because of the pandemic, which has exposed Breyer’s quirky questions to a wider audience. And it comes when some progressives were urging the 83-year-old justice to retire while Democrats control the White House and the U.S. Senate.

On the Strict Scrutiny podcast by progressive law professors Leah Litman, Melissa Murray and Kate Shaw, there was a drumbeat of frustration this term over Breyer’s meandering hypotheticals, especially in high-stakes cases such as those on abortion rights.

Breyer was “reading long passages” from a prior opinion and “having side conversations with himself,” Litman, an assistant professor at the University of Michigan School of Law, said in an episode after the Dec. 1 argument in Dobbs v. Jackson Women’s Health Organization, about a restrictive Mississippi abortion law.

Murray, a professor at New York University Law School, said in a later episode that Breyer has often been “performative,” as in, “I’m Stephen G. Breyer, I have a hypothetical, it has a spaceship …”

“He seemed to enjoy the sound of his voice too much,” she said.

After Breyer announced his intent to retire last month, Strict Scrutiny did a special episode applauding his decision.

“You were on the outs for several months, there,” said Shaw, a professor at Benjamin N. Cardozo School of Law in New York City, addressing Breyer from a distance. “But we welcome you back with open arms.” 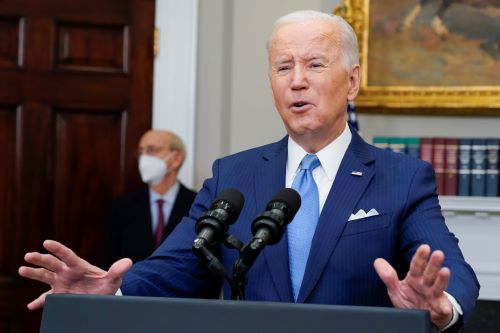 President Joe Biden delivers remarks on the retirement of Justice Stephen G. Breyer in the Roosevelt Room of the White House in late January. Photo by Andrew Harnik/The Associated Press.

Continuing a conversation from chambers

Former law clerks to Breyer say his fanciful hypotheticals are centered on the key points of uncertainty in a given case, and they help him reach an answer.

“Justice Breyer is both supremely analytical and very creative,” says Risa Goluboff, the dean of the University of Virginia School of Law, who clerked for him in the 2001-02 term. “When you are watching him work through those hypotheticals, he is working the problem. Some of it may be funny because he is coming up with funny hypotheticals. But it is deadly serious. You are watching his brain try to solve the problem.”

Farah Peterson, a professor at the University of Chicago School of Law and a clerk to Breyer in the 2015-16 term, said the justice’s questions at oral argument are a continuation of a conversation about the case that begins in chambers with his clerks.

“He would sometimes ask some of the most confusing questions because he was thinking them through as he asked them,” Peterson said during a Feb. 1 online forum organized by the American Constitution Society. “He wanted really to know, how do you answer this problem about how this serves the public good?”

Breyer himself once said, in a 2008 interview with the Associated Press, “The point is to try to focus on a matter that is worrying me. Sometimes it’s easier to do that with an example.”

Lawyers on the receiving end of such questions do their best to follow along and then provide a clear answer.

Neal K. Katyal, who clerked for Breyer in the 1996-97 term and who has argued 45 times before his former boss, says he has experienced both the benefit “and sometimes the agony” of the justice’s extended hypotheticals.

“After spending a year closely at his side, those hypos were things I expected, and indeed I’d try to moot them in advance,” says Katyal, a former acting U.S. solicitor general and now Hogan Lovells partner. “I could never quite predict the exact hypos, … but that year gave me a good sense of what the hypo would be designed to try to tease out.”

Katyal was familiar with a Supreme Court precedent that Breyer was referencing and was ready with a response. He won the case.

Breyer’s retirement may signal an end of an era for hypotheticals that are quite removed from the facts of the case. While other justices offer the occasional quirky example, some seem to prefer sharper-edged hypotheticals that invoke au courant hot-button topics.

In a December 2021 argument about state aid to religious education, Justice Samuel A. Alito Jr. asked a lawyer for the state of Maine whether a private school that “teaches critical race theory” would be eligible for state approval. In a January argument about the city of Boston’s program of allowing private groups to fly a flag outside its city hall, Justice Amy Coney Barrett wondered whether the city would permit a flag from the Proud Boys, a white nationalist group.

“Every justice has their own approach to hypotheticals,” says Michael C. Pollack, an associate professor at Cardozo law school and a law clerk to Justice Sonia Sotomayor in the 2014-15 term. “Some justices go in the opposite direction of Justice Breyer and go for things that are in the public eye at the moment. I think that can be very effective.”

He notes that Justice Elena Kagan has several times recently used a sort of lightning round of quick hypotheticals, asking the lawyer to give a yes or no answer. She did that in a major case on student speech case last term, asking a lawyer from the U.S. solicitor general’s office to give his view on whether five different hypotheticals she offered would constitute off-campus speech.

The differences in style between Breyer and Kagan were highlighted in a November 2021 argument in a case about Medicare reimbursement rates. Those two justices had attempted to ask a question at the same time, talking over each other a bit until Breyer paused and said, “We’re probably going to ask the same question.”

“I doubt it,” Kagan said, to laughter from the limited audience in the courtroom.

Pollack has become well-known, at least among his circle of fellow former clerks, for noting when Breyer asks such a long, ponderous question that it fills up a page or more of the argument transcript. Pollack calls them “a full Breyer.”

“As much as I and others might poke fun at Breyer’s questions, they are often very effective in helping him get at something meaningful in the case,” Pollack says.

In a case from 2020 about copyright of software code, Breyer filled 53 lines in the transcript (or nearly two full pages) with a question that referenced QWERTY keyboards on typewriters, “switchboards on old-fashioned telephone systems,” and “a chef who figures out brilliant ways of mixing spices.”

“Long question,” Breyer told the lawyer before him, “… and I wanted you to say what you want about that.”

And now, with the last day of arguments for this term scheduled for April 27, there are only about three more months for such long and befuddling questions.