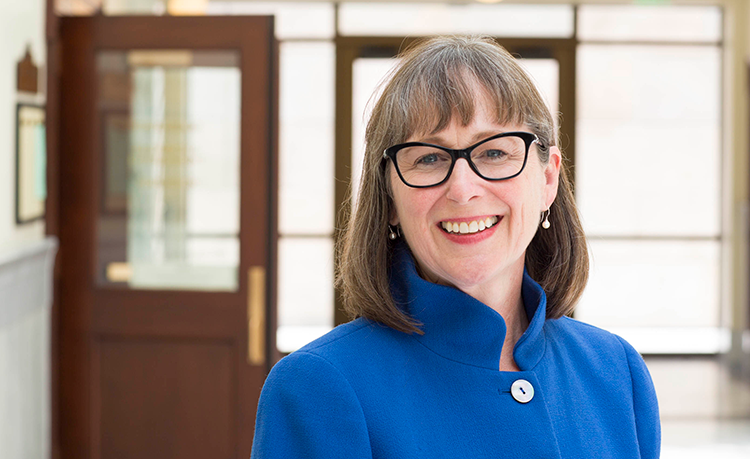 Deborah Ferguson successfully protected in court the right of Idahoans to propose and enact laws independent of the state legislature.

Deborah Ferguson grew up in a blue-collar family in a southwest suburb of Chicago.

Neither of her parents went to college, and her father, who eventually started his own charter boat business, didn’t finish high school. But they prioritized education, and even in grade school, Ferguson knew she wanted to be a lawyer.

“Looking back on it, that was kind of strange because I’d never met a lawyer, although I read about them,” she says. “Lawyers seemed like very important people to me because they could help people.”

After graduating from Northern Illinois University with a bachelor’s degree in finance in 1981, Ferguson went to Loyola University Chicago School of Law. She enrolled in its evening program, taking classes while also working full-time in the trust department of the First National Bank of Chicago.

She began handling civil commercial cases at the firm that is now Katten Muchin Rosenman in Chicago in 1987, and she later became an assistant U.S. attorney with the U.S. Attorney’s Office for the Northern District of Illinois.

Ferguson, who had two young sons, loved skiing, hiking and fishing, and in 1995, she moved with her family to Boise, Idaho. She transferred to the U.S. Attorney’s Office for the District of Idaho, where she served as lead trial counsel in more than 200 federal civil cases, including constitutional litigation, complex torts and landmark environmental lawsuits.

In 2012, Ferguson left the Department of Justice to start her own firm.

“Some people were surprised because no one leaves—especially if you’ve been there 20 years,” says Ferguson, who served as president of the Idaho State Bar and founder of its Idaho Academy of Leadership for Lawyers the year before she left the DOJ. “The work is meaningful, but I felt like I could do a lot more. I wanted to do civil rights work in private practice and be my own boss.”

In one prominent case, Ferguson helped protect the right of Idahoans to propose and enact laws independent of the state legislature.

It arose in March 2020, when she was contacted by Luke Mayville, the co-founder of Reclaim Idaho. The grassroots advocacy organization had made headlines a couple years earlier after successfully spearheading a ballot initiative to expand Medicaid coverage to thousands of low-income residents.

Reclaim Idaho aimed to use the initiative process, which is enshrined in the Idaho constitution, to put another measure on the 2020 election ballot that would allow voters to increase funding for K-12 education. At the time, Idaho ranked last in the nation for per-student spending.

However, as Mayville told Ferguson, Idaho Gov. Brad Little enacted a stay-at-home order in response to the COVID-19 pandemic that didn’t provide an exception for First Amendment activities—including Reclaim Idaho’s collection of signatures to support its initiative.

Ferguson, who by then worked with partner Craig Durham at Ferguson Durham, asked the governor to extend the deadline for signatures or allow Reclaim Idaho to finish collecting them electronically. When Little refused to make accommodations, they filed a federal lawsuit against the state for constitutional violations.

The district court sided with Reclaim Idaho, granting its motion for a preliminary injunction and directing the state to provide the organization a reasonable accommodation. The 9th U.S. Circuit Court of Appeals at San Francisco denied the state’s request for a stay pending appeal. The U.S. Supreme Court, however, granted the stay in July 2020, ending Reclaim Idaho’s bid to collect enough signatures before the election.

The Idaho legislature later passed a bill increasing the number of signatures required to qualify an initiative or referendum measure for the ballot from those of 6% of registered voters in 18 of the state’s 35 legislative districts to 6% in each of the 35 districts. Shortly after Little signed the bill in April 2021, Ferguson filed another lawsuit on behalf of Reclaim Idaho challenging its constitutionality.

“It was clearly a fatal strike at the referendum and initiative in Idaho and made an already very difficult process impossible,” says Ferguson, adding that the law gave any one district a veto power. “There are rules in Idaho that allow you to seek a direct action from the Idaho Supreme Court and request that it exercise its original jurisdiction when there is a possible constitutional violation of an urgent nature.

“That’s what we had because the statute gutted an important constitutional right.”

The Idaho Supreme Court agreed, unanimously ruling in August 2021 that “the legislature has acted beyond its constitutional authority and violated the people’s fundamental right to legislate directly.” The court said while the legislature may define the process by which a right is exercised, laws that keep citizens from effectively exercising a right are subject to strict scrutiny.

The court also awarded attorney fees to Reclaim Idaho and its co-plaintiff, the Committee to Protect and Preserve the Idaho Constitution, under the rarely invoked “private attorney general doctrine.” It is applicable in cases where petitioners have “pursued the vindication of [a] right vigorously and the pursuit of such benefited a large number of Idahoans.”

Mayville notes the importance of the decision, saying the initiative process allows Idahoans to make decisions about health care, education or other issues that affect their quality of life. He also says Ferguson’s commitment to the cause had a lasting impact on him.

“What I quickly learned is that Deborah is relentless,” Mayville says. “If she sees a line of reasoning that is even remotely likely to strengthen her case, she will pursue it vigorously and leave no stone unturned.”

Ferguson cares about ‘human beings behind these cases,’ co-counsel says

Ferguson helped protect the rights of Idahoans in many other cases in the past decade.

Ferguson later argued the case in the 9th Circuit, which affirmed the lower court’s decision.

Shannon Minter, the legal director of the National Center for Lesbian Rights, who assisted on the case, says Ferguson went to great lengths to make their plaintiffs feel valued and protected.

“It may seem hard to remember now, but it was pretty scary to be a marriage equality plaintiff in Idaho at that time,” Minter says. “Those couples, they really were putting themselves in a vulnerable position, and Deborah made them feel secure enough to do that. She cares so much about not just the legal process but about the people involved, the human beings behind these cases.”

Ferguson also worked with Minter and other attorneys on a case involving Adree Edmo, a transgender woman with severe gender dysphoria who was incarcerated in state prison in Idaho. In 2018, the U.S. District Court for the District of Idaho held that prison authorities’ refusal to provide her with gender confirmation surgery amounted to cruel and unusual punishment in violation of the Eighth Amendment.

The state filed three appeals to the 9th Circuit and a petition for certiorari to the U.S. Supreme Court. After the lower court’s decision was upheld, Edmo became the first incarcerated person in the country to receive a court-ordered gender confirmation surgery.

Ferguson, who has served as an Idaho state delegate and Idaho State Bar delegate to ABA House of Delegates, lives in Boise with her husband, Dr. Richard Ferguson. Her son Daniel Hill recently graduated from the University of Idaho College of Law, while her son Johnston Hill is in his third year at Columbia Law School.

Ferguson reiterates that her own passion for civil rights stems from a longtime quest for justice.

“I read a quote recently that said we should think hard about what we owe each other as citizens and human beings,” she says. “I believe that. My views have not changed from childhood—I still believe lawyers are important because we can help people. I am still motivated to fight injustice.”