Christopher Jennison volunteered as an emergency medical technician for more than a decade before deciding last summer, after the birth of his daughter, to stop taking weekly shifts and spend more time at home.

He still wanted to be involved with the Bethesda-Chevy Chase Rescue Squad—where he helped provide emergency medical, fire and rescue services to communities in Montgomery County in Maryland and northwest Washington, D.C., since 2016—and was elected treasurer of its board of officers in January.

That meant that Jennison could stay active as an EMT and sign up for occasional shifts. But more importantly in recent months, it also meant that he could help the squad respond to the COVID-19 pandemic. In addition to volunteering for surge shifts in March and April, when emergency calls were expected to increase, he began working with local businesses to arrange lunch and dinner for his fellow frontline responders.

“It was hard for me to, quote unquote, hang up my EMT certification last summer because I’d been doing it for so long,” says Jennison, an employment and labor counsel with the Federal Aviation Administration in Washington, D.C., and assembly clerk of the ABA’s Young Lawyers Division. “But for me now, with the different allocation of my time, I am able to use my skills to help with the board, to help with meal organization, and to help with providing supplemental staffing at a time when more than ever an EMT is needed.”

“To have me and all volunteers stepping up to make sure that our community is served and safe, it’s meeting the call of this pandemic,” adds Jennison, who is also a Maryland State Bar Association delegate to the ABA’s House of Delegates.

It’s easy for Jennison to trace how he became an EMT and a lawyer.

The Silver Spring, Maryland-native remembers his mother, who was a law professor, and his father, who worked in Chrysler’s corporate office, talking often about current affairs. That, along with growing up near the nation’s capital, ignited his interest in public service.

Jennison wanted to join the military and was accepted to the U.S. Coast Guard Academy and the U.S. Merchant Marine Academy. When scoliosis kept him from attending, he went to Syracuse University in New York and studied policy.

He also found another way to serve his community—joining the Syracuse University Ambulance and becoming certified as an EMT during his freshman year. By the time he was a junior, he was a field supervisor and logged up to 50 hours each week.

“We would suit up in our uniforms and go to class with our SUV,” Jennison says. “If we had to leave for a call, we left for a call. It was up to us to explain to professors in advance that we were responsible first for medical coverage for the university.”

After graduating from Syracuse University in 2012, he went to the University of Pennsylvania in Philadelphia for his master’s degree in public administration. He continued to volunteer as an EMT in nearby Mount Laurel Township in New Jersey.

Jennison returned to Syracuse University—and the Syracuse University Ambulance—when he realized that he was most interested in the legal side of policy issues. He joined the ABA’s Law Student Division, working as a circuit governor and as the law student at large on the board of governors.

He also met his future wife, Josephine Bahn, who was active in the Law Student Division and became its vice-chair.

“We actually met at [the annual meeting] in Boston in 2014, and then we had to plan a conference together,” says Bahn, who is now a lawyer with the Federal Deposit Insurance Corp.’s consumer enforcement unit and a candidate for secretary of the Young Lawyers Division. “We started to talk and kind of were inseparable.”

Bahn quickly recognized that being an EMT was part of Jennison’s identity. As a graduate of St. Joseph’s University, a Jesuit institution in Philadelphia, that also mattered to her.

“The ideology of being a servant leader is very important to me,” she says. “I don’t know anyone who is more of a servant leader than he is. He’s able to go into our community every day and give back. It’s pretty amazing to see it in action.”

After Jennison received his law degree in 2016, he moved home to the Washington, D.C., area and worked as an honors attorney with the U.S. Department of Transportation for a year before joining the FAA.

He heard from friends that the Bethesda-Chevy Chase Rescue Squad was a busy station with a good reputation and became a regular on the Thursday night crew. He went in at 7 p.m., worked a 12-hour shift, and drove directly to his office in Washington, D.C., the next day.

“That whole time, from 7 p.m. to 7 a.m., would be peppered in with calls,” Jennison says. “Some nights we wouldn’t have a single call, and other nights we would have seven or eight calls. There are a lot of nursing homes in the area, so you get a lot of elderly folks who are having trouble breathing. We would be going to treat those folks and bringing them to the hospital. Or we would have a lot of car wrecks, especially late at night.”

Jennison adds that because the squad also receives calls for allergic reactions, falls and other injuries, squad members spent several hours on training each shift so they would know how to respond.

“It’s so important to prepare and train and not just train on a few scenarios but train on everything. Because you can’t predict what the next call will be,” he says. 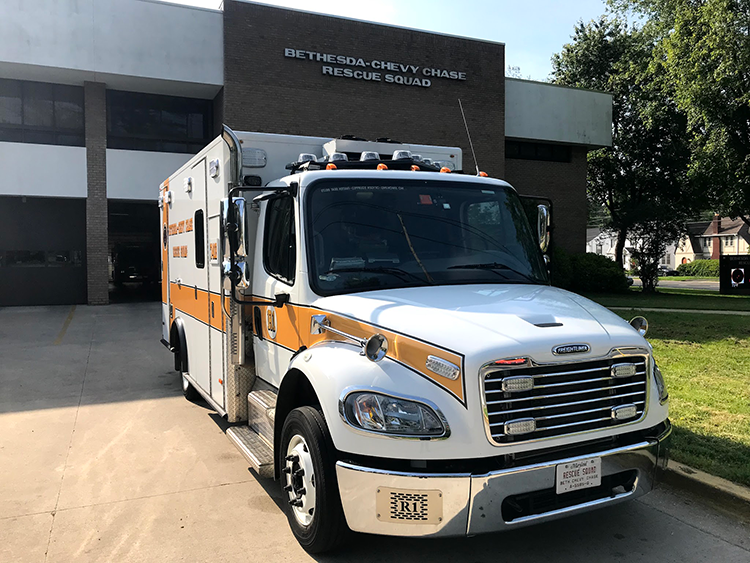 An ambulance stands in front of the Bethesda-Chevy Chase Rescue Squad headquarters.

In early March, Jennison joined the other members of the Bethesda-Chevy Chase Rescue Squad board in discussing the novel coronavirus and how it could affect their operations.

They created a COVID-19 task force and began meeting each afternoon to plan everything, including their use of personal protective equipment and how to help volunteers manage their mental health during the pandemic. After they stopped using their station kitchen, they also decided that they didn’t want to put their front line responders at even greater risk by asking them to pick up their own food.

“We decided we wanted to provide minimal incentive to our volunteers to keep putting themselves on the line and also to keep them from having to go to restaurants or grocery stores themselves and increase their risk of exposure while on duty,” Jennison says.

He volunteered to order pizza for the day and night shifts but realized that healthier options were needed as the public health crisis continued. He now asks local restaurants and catering companies that want to support their volunteers to donate chicken and vegetables, sandwiches or salads.

“We’re talking about the health and well-being of our responders,” he says. “Some of these folks are living in the station. Some of them are riding multiple times a week, multiple days in a row.”

Ken Holden, the president of the Bethesda-Chevy Chase Rescue Squad, has never experienced anything like the COVID-19 pandemic in his nearly 48 years of service. He contends that even before moving into emergency mode, his department required more from its members than others in the area.

Holden says he can always count on Jennison, who “loves to take on a task, see it through, and make sure it gets done right.”

“And for someone like Chris, who is a lawyer, now married and has a family, to have that all going and still commit to this organization, that’s dedication,” he says. “To still put in the hours that he does, I’m just in awe of what he does and how he does it.”