How quickly can Biden deliver on policing reform? 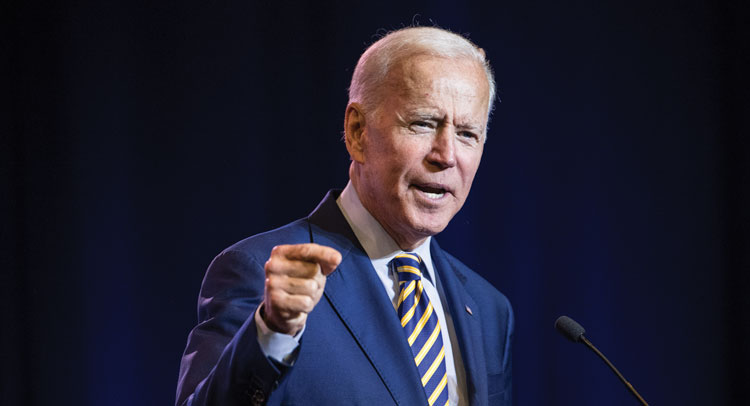 At his inauguration, President Joseph R. Biden said a cry for racial justice “some 400 years in the making” had shaken the nation. “The dream of justice for all will be deferred no longer,” Biden declared. “We can deliver racial justice.”

Now, criminal justice reform advocates will be watching closely to see how quickly Biden turns words into action to tackle racial equity and a slew of issues that include mass incarceration, sentencing and the death penalty.

Biden has made police reform one of his top priorities after the killings of George Floyd, Breonna Taylor and countless other Black men and women. Executive orders and the bully pulpit are options to push for changes in Congress, and the U.S. Justice Department will serve as another tool for reform.

Biden will have to reconcile his impulses as a centrist politician, overcome a troubled record on criminal justice and bridge divisions with law enforcement that widened after national protests against police brutality. He will also have to balance the urgencies of an unprecedented public health crisis with progressives’ demands for rapid and dramatic change.

Delvin Davis, a regional policy analyst at the Southern Poverty Law Center, is cautiously optimistic. He says the politics of 2021 contrast sharply with the environment that led then-senator Biden to author the 1994 crime bill, which experts say propelled the mass incarceration epidemic. Davis argues reformers can steer Biden and the Justice Department away from a “moderate, centrist” view.

“I have confidence that the advocates and the people on the ground doing grassroots work can push them towards a bold vision,” Davis says.

Brett Tolman, a conservative who served as U.S. attorney for the District of Utah under Presidents George W. Bush and Barack Obama and has served as legal counsel to the U.S. Senate Judiciary Committee, hopes Biden and Vice President Kamala Harris can mirror his own awakening on criminal justice reform.

“President Biden and Vice President Harris have implemented some devastating practices and policies in the past,” Tolman says. “I’m hopeful they’re going to be focused on criminal justice reform because right now, I can’t think of anything more important and also potentially more unifying for the country than figuring out how to do it.”

Biden’s campaign website says the administration will “expand and use the power of the U.S. Justice Department to address systemic misconduct in police departments and prosecutors’ offices.” Lauren-Brooke Eisen, director of the Justice Program at the Brennan Center in New York, says she expects a return to Obama-era “pattern and practice” investigations that led to 14 consent decrees, including in Baltimore, Los Angeles County and Ferguson, Missouri.

She also wants the Biden administration to revive efforts under the Collaborative Reform Initiative in the DOJ’s Community Oriented Policing Services office to work with local police departments to weed out bias and change use-of-force policies.

Eisen is co-author of a series of criminal justice proposals for the administration to consider. Among other recommendations, the Brennan Center wants Biden and Congress to push through the Reverse Mass Incarceration Act, which proposes $20 billion in funding to reduce populations in overcrowded state prisons by 20% over 10 years. The bill was introduced in Congress in 2017 and again in 2019. The plan calls for national standards on use of force and for the end of a U.S. Department of Defense program that transfers excess military-grade weapons to state and local police departments.

In 2016, when Obama picked Judge Merrick Garland as his nominee for the U.S. Supreme Court, he had an eye on pleasing moderates and conservatives who nevertheless quashed the nomination. But at his attorney general confirmation hearing, Garland was well-received by members of both parties.

Miriam Krinsky, a former federal prosecutor who founded Fair and Just Prosecution, believes Garland, who was confirmed earlier this month, can restore the DOJ’s reputation after Trump politicized it.

“The gravitas he brings to the role is vitally important to rebuild what the Department of Justice was,” Krinsky says.

In an opening statement at his confirmation hearing, Garland said the DOJ needs to uphold the constitutional rights of all Americans “because we do not yet have equal justice.”

“Communities of color and other minorities still face discrimination in housing, education, employment, and the criminal justice system,” Garland said.

Like Biden, however, he said that he does not support calls to defund the police. “I do believe, and President Biden believes, in giving resources to police departments to help them reform and gain the trust in their communities,” Garland said at the hearing. 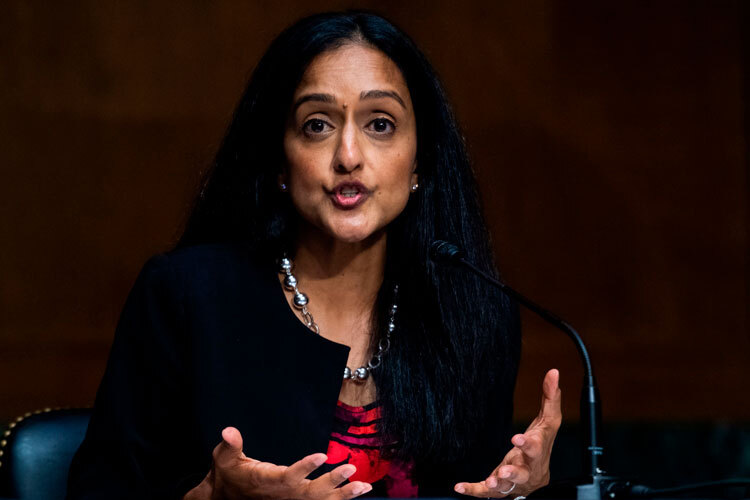 Critics of Garland note his record as a federal judge when he has sided with police and prosecutors. But Biden has been careful to balance moderates and progressives in his DOJ picks. In addition to nominating Lisa Monaco as deputy attorney general, Biden picked Vanita Gupta as associate attorney general and Kristen Clarke to head the department’s powerful civil rights division.

Both have strong criminal justice reform credentials. Despite strong liberal support, Gupta faced significant opposition from Republicans and conservative activists during her March confirmation hearings, when she was forced to walk back tweets she had written attacking conservatives.

John Malcolm, a criminal justice expert at the conservative think tank the Heritage Foundation, is enthusiastic about Garland, whom he describes as a “sober” and “serious” pick, but he is concerned Gupta and Clarke would aggressively push for investigations into police departments rather than bringing law enforcement leaders and organizations into the fold.

“There are problems in our justice system,” Malcolm acknowledges, but he believes Biden would be wise to “use a scalpel, not a meat cleaver” for any fixes.

In the general election, voters showed an appetite for measures holding police accountable for misconduct. After a summer of discontent, they supported ballot measures on accountability and transparency and investigations into police brutality.

A wave of local and state prosecutors won elections on platforms promising reforms, including Monique Worrell, the new state attorney in Orlando; Jason Williams in New Orleans; and Los Angeles District Attorney George Gascón. As head of the largest prosecutor’s office in the nation, Gascón has already announced wide-ranging reforms on prison terms, cash bail and the death penalty, and he has faced opposition from prosecutors in his own office.

“Law enforcement is mostly a local matter in the United States—meaning that the role of the federal government is limited,” says Daniel Schneider, a former trial attorney in the criminal division of the Justice Department. “That makes it difficult for the federal government to influence local policing or police departments around the country.”

Biden has pledged to invest $300 million in the COPS program to foster community policing. His campaign website says as a condition of funding, “police officers must mirror the racial diversity of the community they serve.”

Anthony Holloway, a police chief in St. Petersburg, Florida, and chair of the ABA Criminal Justice Section’s Law Enforcement Committee, says he expects the DOJ to use funding as a way to pressure police departments to make reforms. Grant dollars for community policing could also be leveraged as a way to advocate for change, he adds. 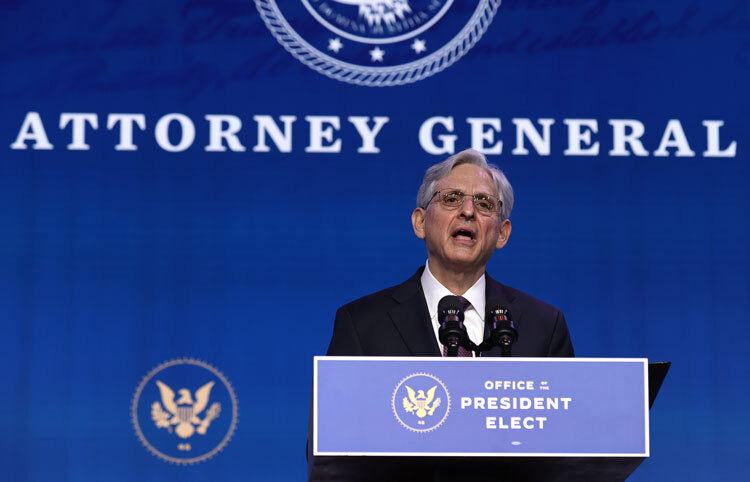 Biden could take wide-ranging action with the stroke of the presidential pen. In February, Biden urged lawmakers to pass the George Floyd Justice in Policing Act. The bill passed in early March, setting in motion national standards for police use of force.

But Schneider argues the real action on shifting police practices may happen in federal courts, where judges have the authority to determine whether a state or local police department’s practices are constitutional.

To accomplish reform goals within his control, Tolman hopes Biden will reach across the aisle to Republican lawmakers who support reform efforts. Among them is South Carolina Sen. Tim Scott, who proposed a police reform bill called the Justice Act that floundered last year in Congress after Senate Democrats said it did not go far enough toward holding police legally accountable.

“They are out there wanting to engage,” Tolman says.

According to Tolman, it’s also time for Biden to repair relationships with police unions and officials feeling targeted after mass protests over police brutality and calls to cut police funding. Historically, law enforcement unions have erected barriers to reform.

But the glacial pace of the federal government and the delicate balancing act required to negotiate the deep-seated issues could frustrate all sides, particularly advocates demanding immediate and lasting change.

Krinsky believes these early months of the Biden presidency could be crucial.

“The country is crying out for change, and people are taking to the streets begging for change, and I think there’s a real opportunity here, but it’s one that requires a swift response,” Krinsky says.