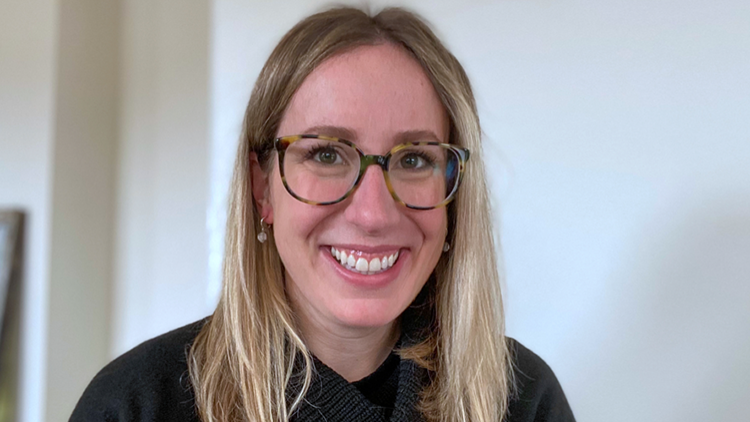 Law student Emily Dillan has called on her experience as a domestic violence survivor to design workshops that help fellow students learn how to interact with clients who have experienced trauma.

Emily Dillan went to the University of Massachusetts School of Law hoping to help survivors of domestic violence in her community, but through a new opportunity with the ABA, she could soon extend her advocacy across the country.

The 2L serves as the Law Student Division liaison to the Commission on Domestic & Sexual Violence, which aims to help attorneys increase access to justice for victims of domestic violence, sexual assault and stalking. In this role, she expects to develop programming and write articles that encourage law students to become more engaged in issues of domestic and sexual violence.

Dillan also wants to introduce them to trauma-informed interviewing, a concept at the center of a professional development workshop series she created with fellow 2L Jennifer White for UMass Law. They came up with the idea last year after they heard another student talk at a bar association event about how her work in the Immigration Law Clinic unexpectedly brought up some of her own trauma.

Although UMass Law includes client interviewing techniques in its curriculum and clinics, Dillan and White realized they could go a step further and offer a central place on campus where all students could learn how to work with clients who had endured traumatic experiences.

“Jen and I talked and thought this was something we’d both really like to learn,” says Dillan, who is a Public Interest Law Fellow and in the joint JD/MSW program. “We wanted to craft a workshop that we ourselves could benefit from because then we felt that the entire campus community would benefit from it as well.”

The first workshop in the “Meeting Clients Where They Are At: Special Skills for Interviewing” series was Sept. 23. A UMass Medical School professional provided an overview of trauma, and attorneys who practice in immigration and criminal law discussed their work with traumatized clients.

“It’s this amazing exposure for students to the nuances of that type of specialized client interviewing,” says Julie Cahill, the assistant dean of students at UMass Law. “That’s a value-add for us. She’s a student and she’s designing this kind of program for the benefit of other students. Isn’t that a wonderful way to make a contribution to your law school community?”

Dillan also hopes to use her platform with the ABA to help other law students replicate these efforts in their own schools. She believes if more attorneys use trauma-informed interviewing techniques, more clients who have experienced domestic or sexual violence will access the justice system.

“A lot of survivors are hesitant to report,” Dillan says. “Hopefully, knowing that attorneys have been trained in dealing with these types of issues, not just in the legal sense but in an interpersonal sense, might make someone more comfortable to come forward.”

Dillan brings lived experience to her work with survivors

Dillan knows from personal experience how trauma can affect survivors of domestic and sexual violence.

The Cape Cod, Massachusetts, native went to Emmanuel College in Boston but returned home after two years and got a job in the restaurant industry. She started dating a man and spent five years in an abusive relationship before leaving him when she was in her mid-20s.

“I had nowhere else to go so I ended up moving back in with my parents,” Dillan says. “My life was, quite frankly, an absolute disaster. My finances were a mess. I had no car. It was literally like starting from scratch again.”

Dillan began working as a receptionist at an H&R Block and eventually became licensed as a tax preparer. She liked the business world and decided she wanted to go back to school to be either a certified public accountant or a tax lawyer.

Dillan also worked as a paralegal at a personal injury law firm, which confirmed that she wanted to go to law school. But one day, she says it struck her that she wasn’t meant to practice tax law.

“I was out on a walk, and it dawned on me: ‘Rebuilding your life is the hardest thing you’ve ever done. Period. Full stop,’” she says. “So, I thought to myself, ‘It would be such a shame to take what happened to you and just let it be part of your story and not use it to give back to other people.’”

Dillan, who never reported her abuse because she feared the consequences, also felt she could in some way pursue her own justice as she pursued justice for other survivors of domestic violence. She was particularly interested in exploring legislation that could make a difference for them.

“It’s part of what makes me so passionate about what I do,” she says. “I look at it as, if these laws were different, maybe I would’ve reported it. So, how can we change the law to make survivors more comfortable reporting their abuse?”

Dillan has spent the past year exploring legislative solutions for survivors

In her first year at UMass Law, Dillan saw in a Women’s Bar Association of Massachusetts newsletter that its Domestic Violence Anti-Discrimination Task Force was drafting legislation related to employment protections for survivors.

She volunteered to help, and during her spring semester researched state law regarding the definitions of domestic violence and abuse and how to demonstrate the existence of domestic violence to employers. She also proofread the bill and asked legislators to become its sponsors after its proposal in February.

The experience inspired Dillan to apply for the Rappaport Fellows Program in Law and Public Policy, which each year places 12 students from Massachusetts law schools in summer internships with policymakers in state and municipal governments. Being selected for the fellowship was “easily one of the top moments of my life,” she says.

“I realized that, ‘Everything you have been through has finally led you to this moment, and this is a really big deal. It wasn’t just in vain. You’re in the right place, and you’re on the right track,’” Dillan says.

She worked in the office of Massachusetts Rep. Natalie Higgins, where she took the lead on two domestic and sexual violence policy initiatives that are pending before the legislature.

One bill is modeled on the Phoenix Act—which California passed in 2019—and would extend the statute of limitations for survivors of domestic violence in Massachusetts to 15 years. It also includes definitions of the terms “coercive control” and “technological abuse.”

The other bill seeks to adopt the Sexual Assault Survivors Bill of Rights, which was drafted by national nonprofit Rise to expand the existing protections afforded to survivors of sexual violence.

“I’m really thankful for all of her support and hard work,” Higgins says. “I’m also so excited for the recognition she’s getting from the ABA and to watch her career continue, because I think she’s going to bring some really important advocacy to the world of domestic and sexual violence.”

Dillan remembers that she was logging into the Rappaport program’s virtual closing ceremony in late July when she found out she had been named the Law Student Division liaison to the Commission on Domestic & Sexual Violence.

She joined the ABA when she started law school and considered the appointment another affirmation that she was moving in the right direction.

“I had thought going into this that I wanted to do direct client services, but after my experiences working with the WBA and directly with Rep. Higgins, I’m feeling more called to policy as a means of creating overarching change for all survivors,” Dillan says. “But a lot can happen ….”

Techniques for interviewing clients who have experienced trauma

• First, educate yourself on what a trauma response looks like so you can identify this response if/when your client seems to have one. Also, identify your own trauma triggers (if applicable) so that you can be mindful of your responses to your client’s experiences.

• Next, identify the trauma: observe the client’s demeanor, body language, tone, etc., throughout your interactions. If a client seems uncomfortable, they probably are and this is a great time to explore that in greater detail (remember that the interview is not just for fact-finding—human connection fosters client trust, and you should not just ask questions rapid-fire to get the information you need!). Acknowledge your client’s discomfort, and validate the experiences they have had while guiding them through your questions.

• Also, use empathy and compassion: Do not assume things about your client based on their reactions and interactions with you, and do not use placating statements. Put yourself in their shoes — how can you help your client feel more comfortable? Before implementing, make sure to ask your client if your ideas would be helpful since it will make them feel respected, valued and understood even if they do not want the accommodation (for example, “Would you feel more comfortable with a female colleague present for this interview?” “Would you like me to open/close the door?” “Would you like to take a short break for some water?”) But be careful here: Do not allow your own well-intentioned empathy to lead to assumptions as to a client’s state of mind or needs. When in doubt, ask your client how they are feeling and what they need. Every individual is different, and trauma manifests in different ways for all of us.

• If you are in a field in which traumatic experiences are a regular part of your clients’ lives, create a comforting environment: Provide fidget toys they can use if experiencing anxiety to keep themselves occupied (for example, aromatherapy putty can be purchased on Etsy); sit next to a client during the interview instead of across from them (studies have shown that it is easier to have emotionally heavy conversations when sitting side by side); keep tissues on hand; speak in a low, comforting tone; invest in a white-noise machine that can be turned on outside the door for particularly sensitive conversations; and be mindful of the language you are using (for example, don’t ask, “Were you drinking or using drugs prior to your sexual assault?”—instead, ask what they had done that day prior to the assault so you do not make them feel additionally victimized or responsible).

• Use best practices: Take breaks; explain the legal process, what you are doing during the interview and your role; practice active listening and validate the client’s experiences; create an environment in which the client feels comfortable asking both their own questions, and for accommodations and honor their requests if possible; and make referrals for mental health services as appropriate.