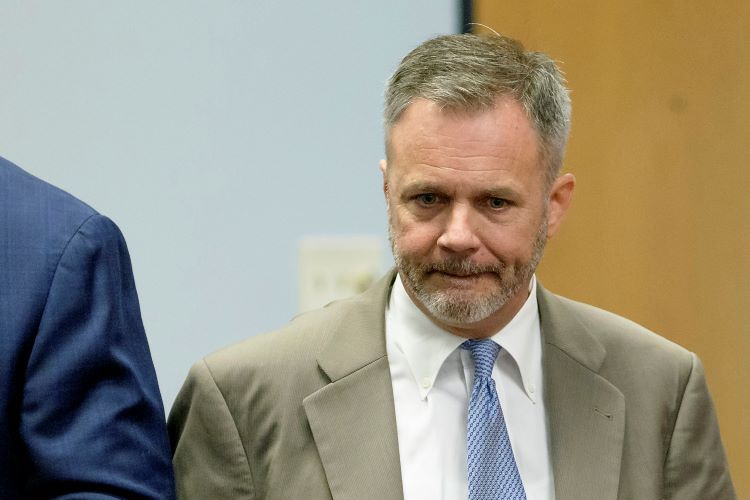 A bankruptcy judge in New Orleans has imposed a $400,000 sanction on a lawyer who represents victims of priest abuse for hinting about allegations against a Catholic priest in violation of a protective order.

Trahant had represented priest-abuse claimants in the bankruptcy of the Catholic Church’s New Orleans Archdiocese. Grabill had signed an order to protect confidential discovery information in the case.

The bankruptcy trustee investigated after a church lawyer notified the court that someone had wrongfully disclosed protected information about a priest accused of sexual misconduct. The priest went on to serve as a chaplain at a local high school before he went on medical leave.

The information was disclosed to the high school and a reporter.

The investigation found that Trahant was “at least one source of the leak,” Grabill said.

Trahant said in a declaration and testimony that he had contacted his cousin, who worked as principal of the high school where the priest had worked as a chaplain. Trahant mentioned the priest’s name and asked his cousin whether the priest was still working at the school. Trahant acknowledged that his cousin knew about the nature of his law practice and would infer that the priest had a history of alleged sexual abuse.

Trahant also emailed a reporter with the priest’s name in the subject line, told the reporter where the priest had been employed, and advised the reporter to “keep him on your radar.” The reporter had previously written stories on priest-abuse allegations.

Trahant said he did not give electronic or physical documents to his cousin or the reporter, however. And he didn’t reveal their contents, he said.

Under questioning by the judge, Trahant acknowledged that he had “planted a seed” with his cousin and the reporter.

“I think this stuff needs to be exposed,” he explained.

The trustee who investigated acknowledged unanswered questions about whether anyone else provided documents or information to third parties. Grabill said she nonetheless had a responsibility to protect the integrity of the bankruptcy process and would sanction Trahant. She previously removed him from involvement in the bankruptcy.

“Trahant not only disobeyed this court’s protective order, but his subsequent evasion and failure to provide information timely to counsel for the committee and the debtor regarding his own conduct constitute bad-faith actions which caused the debtor, the committee and the [U.S. trustee] to divert and expend resources unnecessarily to uncover information that Trahant had all along,” Grabill wrote.

Grabill based the sanction on a percentage of the attorney fees charged to the bankruptcy estate in connection with the archdiocese’s motion for an investigation. The $400,000 sanction is 53% of the total fees incurred.

Trahant told the ABA Journal that “there will absolutely be an appeal” of the sanction order.

“I have testified that I don’t believe anything that I did is a protective-order violation,” Trahant says. “A name is publicly available information, and I’ll repeat what I’ve said over and over again. I did what I thought was the morally, legally, ethically correct thing to do to get a child predator off a high school campus.”

Asked whether $400,000 was an unreasonable amount, Trahant responded: “Is that a rhetorical question? I know it’s not. I believe it’s unprecedented, and I’ll leave it at that.”

Trahant also disputed the judge’s conclusion that he caused delays in the investigation of his conduct.

“I fully disagree with that,” he says.

Trahant says he tried to discuss the issue with archdiocese lawyers in writing, but they would not speak with him. He says he contacted the court “early on” to discuss status conferences, but an order barred him from participating.

As he testified at the August 2022 show-cause hearing, Trahant says, he had nothing to hide, and he did not cause “all of these attorneys’ fees to be amassed.”

“As I told the judge, I would have told you from the beginning what I did and why I did it. But we weren’t given that opportunity,” Trahant says.

Trahant says there are already two appeals of the judge’s earlier order removing him, his co-counsel and his clients from a committee that negotiates with the debtor and the mediator. One is filed on behalf of him personally, and the other is broader.

Although Trahant’s clients have been kicked off the committee, their individual claims are still part of the bankruptcy, Trahant says.

Asked whether he had anything else to add, Trahant responded this way: “There is a ton I would like to add, but because of the nature of this sprawling protective order and the many, many documents that remain under seal in this case, I am not able to speak freely in really any sense about any of this.”

Hat tip to the Guardian and 4WWL, which had coverage of the sanction.

According to the Guardian, the priest had been accused of kissing, groping and engaging in simulated intercourse with a high school girl who was 17 years old.