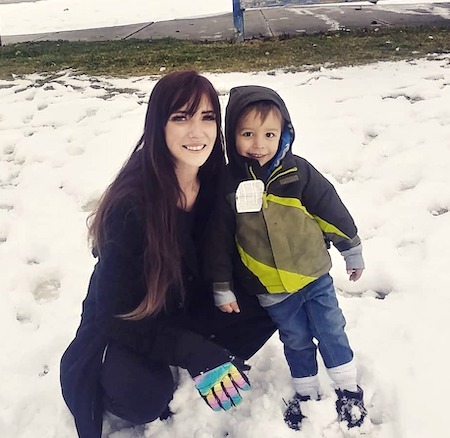 Elisabeth Gutierrez with her son, Xavier.

After hearing about child care concerns from a campus parent group, the University of New Mexico School of Law School convinced the state in September to change a child care subsidy rule, which until then prohibited eligibility for graduate and postgraduate students.

Elisabeth Gutierrez, a mother and first-year student at the Albuquerque, New Mexico, law school, says she missed some classes early in the term because she didn’t have child care for her children, ages 3 and 1. Her husband is wrapping up his degree in certified public accounting while also waiting tables—until the work dried up because of the COVID-19 pandemic.

“If we were having a particularly bad day, or something we had to attend at night, that’s when we started missing some classes,” says Gutierrez, whose law school has in-person and online classes.

The family received the subsidy in October and now pay $250 per month for part-time child care. Without it, Gutierrez estimates that the cost would be $600 per month.

Moms of Law, a new student group at the law school with 30 members, sparked the policy change. The group wanted to start a child care scholarship for students. But during the summer, it learned from the school that it was unlikely it could offer a scholarship expressly for child care costs.

Then in July, the state opened a new agency to oversee early childhood education and care and planned to expand eligibility for services offered. New Mexico is one of four states with Cabinet-level early childhood departments, according to a web post from the nonprofit group Alliance for Early Success.

Kateri West, a Moms of Law co-founder who is a 3L, heard New Mexico Gov. Michelle Lujan Grisham talking about the new offering on the radio. West spoke about this with the law school, and staff contacted Kate Girard, the chief general counsel at the New Mexico Early Childhood Education & Care Department who is also an alumna of the school.

The result was an emergency amendment that expands state child care resources to graduate and postgraduate students.

The changes, which were announced in September, are permanent and for families who are at or below 200% of the federal poverty level, according to a New Mexico Early Childhood Education & Care Department news release. Also, people who attend school or work online can now be eligible for the offering.

“I had tried to get it my first year, and I was told that they saw graduate school as an elective decision and they couldn’t help out graduate students,” says Jessica Arreola, a Moms of Law co-founder who has three children, ages 5, 4 and 1, and graduated in December.

Her husband works as a construction foreman, and her mother has been providing child care. However, she and West say many people in this year’s first-year class are single mothers who have often discussed child care problems at their gatherings.

“Parents who were unable to qualify for the state subsidy had to take on additional debt to finance child care,” says West, who is married to a physician and has a 5-year-old daughter who attends private school with aftercare.

Also, West thinks the old restriction might have prohibited some parents from enrolling in law school.

“We’re really grateful for this service,” Gutierrez says. “I think the administration is doing a great job at trying to help families during a really difficult time.”