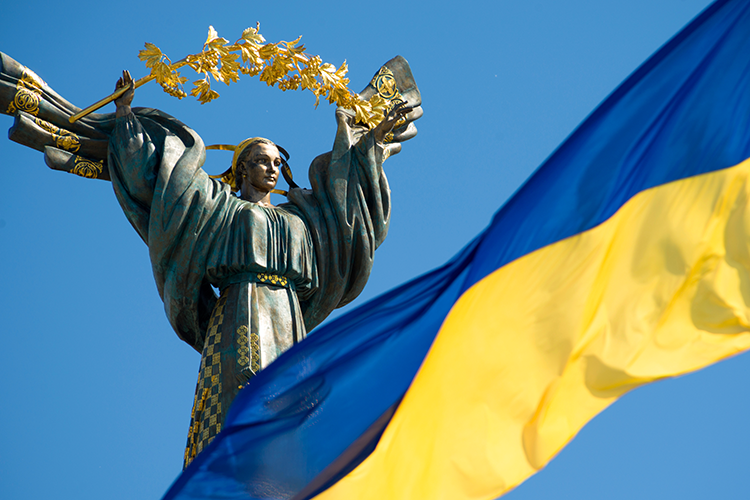 The Independence Monument in Kyiv, Ukraine. Photo by Andreas Wolochow/Shutterstock.

The House of Delegates condemned Russia’s unlawful invasion of Ukraine at the ABA Annual Meeting in Chicago on Tuesday.

The ABA is also calling on the United Nations General Assembly to allow the U.N. secretary-general to swiftly report to the policymaking body “what further measures are needed to ensure that those who committed war crimes, crimes against humanity, genocide, and the crime of aggression” during the invasion are held accountable, according to Resolution 405, a late-filed measure from the New York State Bar Association.

“You may ask, why is the American Bar Assocation being asked to involve itself in a war being waged halfway around the world?” said Scott Karson, a past president of the NYSBA, who introduced the resolution. “Clearly, the association cannot send troops to Ukraine, nor can it furnish weapons. What it can do is to advocate for adherence to the rule of law, just as it has historically, both domestically and around the world.”

“By rule of law, we mean adherence to the following principles: That no one is above the law; that everyone is treated equally under the law; that everyone is held accountable to the same laws; that there are clear and fair processes for enforcing the laws; that there is an independent judiciary; and that human rights are guaranteed for all,” continued Karson, a partner in Lamb & Barnosky in Melville, New York. “We are now witnessing a war being waged by the Russian Federation against the sovereign nation of Ukraine, where each and every element of the rule of law is under attack.”

The NYSBA sought to support Ukraine as tensions mounted with Russia, and on Feb. 15, its International Section and the Ukrainian Bar Association formed a Ukraine Task Force, according to the resolution’s report. Nine days later, Russia invaded Ukraine.

Mark Alcott, another past president of the NYSBA, also spoke in favor of the resolution. He told House members that he recently traveled to the western border of Ukraine.

“I saw firsthand the human cost of Russia’s war crimes,” Alcott said. “The mass of refugees fleeing for their lives, their homes destroyed, their families separated, their children in peril. The world cannot ignore this. We, as a bar association, cannot ignore these war crimes and violations of international law.”

Resolution 405 follows a 2013 resolution that urged “all countries, consistent with international law, not to apply statutes of limitation with respect to (1) genocide, (2) crimes against humanity, and (3) serious war crimes.”

The House also passed a resolution at the ABA Midyear Meeting in February before Russia’s invasion that urged permanent U.N. Security Council members “to commit in principle to voluntary restraint in exercising their veto power with respect to credible, non-pretextual resolutions proposing measures to prevent genocide, serious war crimes, ethnic cleansing, or crimes against humanity, or to bring to justice persons accused of committing such crimes.”