The aftermath of the missile attack by Russian forces against the city council building in Kharkiv, Ukraine. Photo by Pavel Dorogoy/The Associated Press.

As Russia began its attack on Ukraine in late February, the Ukrainian Bar Association also leaped into action, issuing statements condemning the violence, calling on international leaders to impose sanctions on the Russian government, and mobilizing its members to assist refugees fleeing to nearby countries.

UBA President Anna Ogrenchuk and CEO Inna Liniova, who first spoke with ABA President Reginald Turner ahead of the invasion about how the two organizations could work together, also began sharing what was happening on the ground in Ukraine with other bar associations and their members. 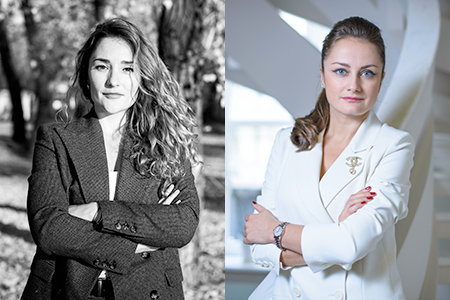 Inna Liniova, left, is the CEO of the Ukrainian Bar Association. Anna Ogrenchuk is the president of the organization.

Ogrenchuk and Liniova talked about recent developments and their ongoing efforts with the ABA Journal this week. They responded to these questions, which were provided by email, Friday. Responses have been lightly edited for clarity.

Q. Where are you located now, and what is the situation like there?

A. The UBA office is in the center of Kyiv, thus currently it is closed. The situation in Kyiv and throughout Ukraine remains tense. Russian troops are trying to surround Kyiv from the north and west, nearby cities (Bucha, Gostomel, Irpin, others) are under constant bomb shelling, fierce street fighting takes place every day. Other Ukrainian cities like Kharkiv, Chernihiv, Borodianka are constantly under rocket attacks; a lot of residential houses, schools, administrative buildings are destroyed; several regions of Ukraine are on the verge of humanitarian and ecological catastrophe. Several big cities to the south are partly or fully under control of Russian occupants (Kherson, Mariupol, Melitopol).

Q. Has there been any damage to your homes or to the UBA office?

A. Currently, there is no damages to the UBA office, but several houses of our UBA members were destroyed. Besides, cities in close proximity to Kyiv, like Irpin, Bucha, Chernihiv and others, are almost completely wiped off. A lot of bridges are blown up, too. And today early in the morning, Russian military escalated their aggression a dozen times more by shelling a nuclear power plant in Ukraine. We might be standing on a verge of a major ecological disaster that could beat the consequences of the Chernobyl explosion in 1986. 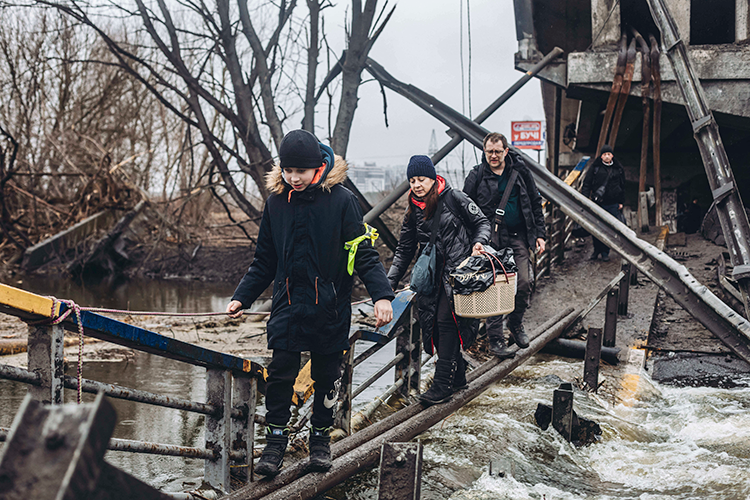 Civilians cross the remains of a bridge that was collapsed by Ukrainian forces to stop Russian troops from advancing in Irpin, Ukraine. Photo by Diego Herrera/Europa Press/Abaca/Sipa USA via AP Images.

Q. What are you hearing from other UBA members about their experiences?

A. Many lawyers are currently in the territorial defense squads, some have relocated to the western Ukraine and are working there, helping refugees from other parts of Ukraine. The UBA chain is very united and well coordinated, UBA members from western parts of the country help others with settlement, food, documents, etc. A lot of our members are helping at the border—both from the territory Ukraine and from abroad—helping refugees to leave Ukraine and to safely get to their destination. We are very grateful to our foreign colleagues from Romania, Slovakia, Hungary and especially Poland, who offer social, legal and other support to Ukrainians fleeing the war.

Q. We’ve read through your materials (compiled for foreign colleagues here). How are you deciding what efforts to focus on? What is your top priority right now?

A. Currently, our biggest priority is to connect with governments of the U.S. and of European countries, EU and other international stakeholders to urge them to impose radical economic and financial sanctions on the Russian Federation and the Republic of Belarus so that to stop the atrocities in Ukraine.

Among our key recommendations are the following: to enforce no-fly zone over Ukraine; to impose a full oil and gas embargo; and ensure complete economic isolation of the Russian Federation, its officials, oligarchs and businesses. Disconnecting the Russian Federation and the Republic of Belarus from the [Society for Worldwide Interbank Financial Telecommunication] system is absolutely necessary, too.

Q. Are you involved in any initiatives on the ground in Ukraine? How are your members getting involved or helping you with your efforts?

A. UBA also has launched a hotline where more than 100 lawyers from all over the country provide legal advice to Ukrainians on various matters, including property damage, injuries, migration, mobilization and others. We have established a dedicated page on our website with breakdown of migration information per country, so that the relevant information is easily accessible.

We are closely cooperating with the office of the prosecutor general on launching a unified platform/IT tool for gathering and securing evidence of war crimes and crimes against humanity towards upcoming proceedings in the International Criminal Court and in other international judicial institutions.

Q. Why is it important for ABA members and other U.S. lawyers to know about these efforts?

A. We believe that it is important for Americans and other lawyers and representatives of businesses to know about these developments because Ukraine needs the assistance of every single person we can reach out to. Although the mechanisms provided by the international law will bring results, these processes take time. What we need now is radical economic, financial and other sanctions able to immediately stop Putin’s regime from further aggression. Legal and business communities need to rise up to a threat and show that the world and each of us will protect democratic values, that aggressors cannot enjoy benefits of the western world and commit war crimes at the same time.

High-level officials of the Russian Federation have confirmed that the so-called military operation will not stop until full “demilitarization and denazification” of Ukraine, which means full destruction of all those who oppose Russian supremacy over Ukraine and are ready to defend Ukraine’s independence and sovereignty. We need the world to react now and also to realize that it’s not about Ukraine anymore. Even if Kyiv falls, Russian leadership will not stop—Europe and the world will become the next target, and military and economic repression of democratic countries will not stop. 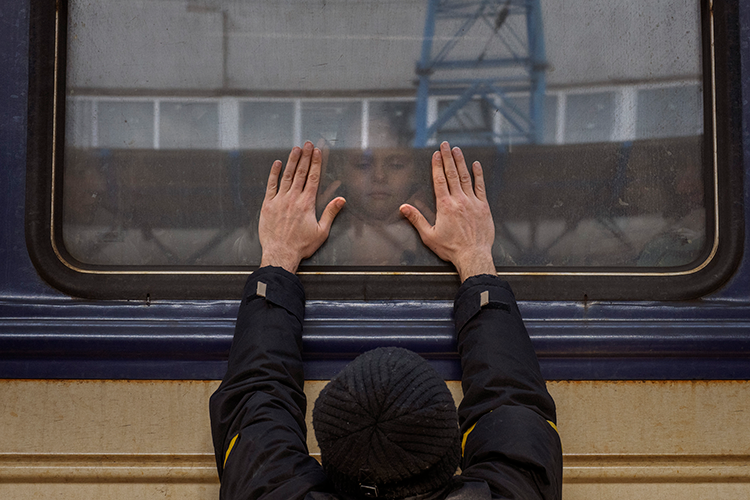 Aleksander, 41, bids goodbye to his 5-year-old daughter Anna at the Kyiv train station Friday. Aleksander’s family is fleeing the country, while he stays behind to fight. Photo by Emilio Morenatti/The Associated Press.

As part of the ABA Journal’s conversations with the UBA leaders, we asked how our readers could support their efforts.

The UBA leaders shared an open letter that they wrote Thursday to the U.S. government and European governments, which outlines the measures they think are necessary to restore the rule of law. They are also asking their colleagues around the world to sign a petition seeking the establishment of a dedicated tribunal for high-level officials of Russia and Belarus.

The UBA created a page on its website that aims to raise funds specifically for the Ukrainian army and another page that lists other ways that people can aid the people of Ukraine during the ongoing conflict.