Ukraine asks international courts to rule against Russia for its 'brutal invasion,' with one quick success 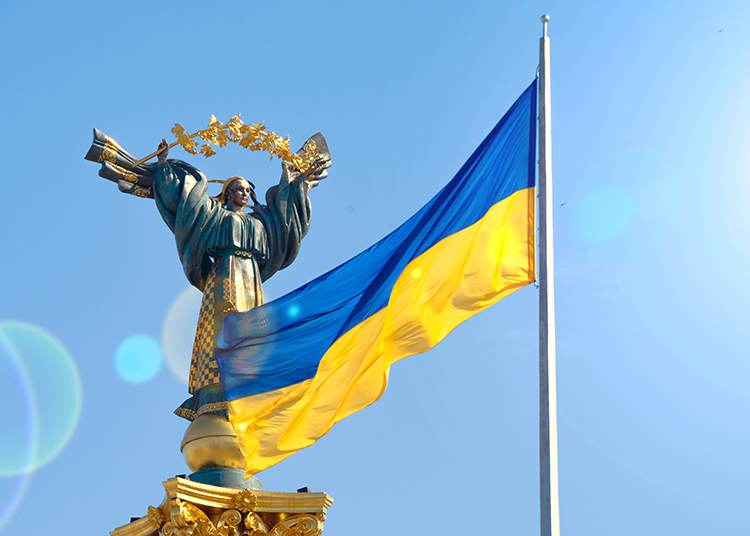 The Monument of Independence in Kyiv, Ukraine. Image from Andreas Wolochow / Shutterstock.com.

Updated: The European Court of Human Rights has quickly issued an interim decision against Russia, while another international court is also considering action after Ukraine complained of a "full-scale, brutal invasion."

The European Court of Human Rights issued interim measures Tuesday, just one day after Ukraine sought relief. The court told Russia to refrain from military attacks against civilians and civilian buildings, including residences, emergency vehicles, schools and hospitals, according to a press release (available here) and Courthouse News Service.

Ukraine had alleged “massive human rights violations being committed by the Russian troops” in its case before the European Court of Human Rights.

The court can take interim measures regarding any state party to the European Convention on Human Rights when there is an imminent risk of irreparable harm. Ukraine and Russia are both parties to the treaty, according to Human Rights Watch.

In a separate case, Ukraine sued Russia on Saturday in the United Nation’s highest court, the International Court of Justice, report the Associated Press, Reuters and a court press release.

By seeking provisional measures, Ukraine was able to get a quick hearing. It has been set for March 7 and 8, according to an announcement Tuesday. It can take years for a case to reach the trial stage, on the other hand.

In the case before the International Court of Justice, Ukraine contends Russia made “a nonsensical and utterly unsupported claim” of Ukrainian genocide in its eastern regions of Luhansk and Donetsk to justify its invasion. Ukraine wants the court to resolve disagreements over the alleged acts of genocide and Russia’s justification for military action.

Ukraine contends the UN court has jurisdiction to resolve a dispute over the 1948 Convention on the Prevention and Punishment of the Crime of Genocide, which has been signed by both Ukraine and Russia.

“Russia has turned the Genocide Convention on its head—making a false claim of genocide as a basis for actions on its part that constitute grave violations of the human rights of millions of people across Ukraine,” says Ukraine’s application instituting proceedings.

“Russia’s lie is all the more offensive, and ironic, because it appears that it is Russia planning acts of genocide in Ukraine. Russia is intentionally killing and inflicting serious injury on members of the Ukrainian nationality—the actus reus of genocide under Article II of the Convention.”

According to AP, orders of the International Court of Justice “are legally binding, but not always adhered to.”

Ukraine’s argument could be enough to persuade the court to issue provisional measures, according to the EJIL: Talk! blog. “Not that Russia is likely to comply,” the blog says. “But still—rhetorically and symbolically there is some power to this.”

The Lithuanian government, meanwhile, says it will ask prosecutors with the International Criminal Court to investigate war crimes in Ukraine, Reuters reports in a separate story. Russia and Ukraine are not members of the ICC, but Ukraine has accepted the court’s jurisdiction, according to a post by Human Rights Watch.

In a statement ICC prosecutor Karim A.A. Khan said his office has the authority to investigate any act of genocide, crime against humanity or war crime committed in Ukraine. His office does not have jurisdiction, however, to investigate crimes of aggression under 2018 amendments to the Rome Statute, the treaty that established the International Criminal Court. That’s because neither Ukraine nor Russia are parties to the treaty.

Khan said in a new statement Monday he has decided to open an investigation, focusing on alleged war crimes before and after the Russia invasion, CBS News reports.

“The invasion violates the United Nations Charter on the principles of national sovereignty, rule of law, due process and universal human rights,” Turner said. “The response from nations and institutions that remain committed to the principles of international legal order has been encouraging as they provide economic, military and diplomatic support for Ukraine and exert financial pressure on Russia and its leaders through legal sanctions. The spirit and resilience of the Ukrainian people have been inspiring despite their substantial suffering.”

European Council on Foreign Relations: “International law and the invasion of Ukraine”