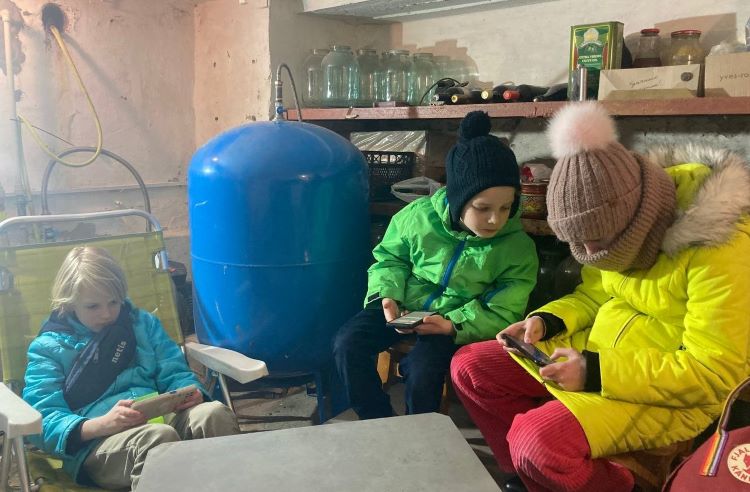 Alesya Pavlynska’s children Ivan, from left, Oles and Maria take refuge in a cellar in Kyiv on the day of the Russian invasion of Ukraine. Photo courtesy of Arzinger Law.

A Ukrainian lawyer described the harrowing scenes she witnessed after the Russian invasion, telling an ABA panel on April 7 that she was forced to flee her country with her three young children and leave behind her husband.

Alesya Pavlynska, an employment lawyer at the Ukrainian firm Arzinger Law, described her shock as the first missiles shook Kyiv in the early hours of Feb. 24.

Her husband, Vitalii Shestak, told her and their three kids—Maria, Ivan and Oles—that they would need to take shelter. Pavlynska showed the panel a picture of her children bundled up in a frigid cellar and huddled around their phones.

“It seemed to be unreal and not possible in the modern world—in modern Europe,” Pavlynska said of the moment it dawned on her the invasion was happening.

More than 4.6 million Ukrainians have fled into Poland, Hungary, Slovakia, Moldava and Romania. The ABA convened the webinar, “Ukraine’s Refugee Crisis: The Faces of War,” to discuss the ongoing crisis and how its members can help.

Pavlynska also made the difficult decision to leave the country with her children after fleeing to the city of Lviv in western Ukraine. Shestak stayed behind to join the military while his family traveled by bus to Poland and then to Germany, where they arrived on March 7. Pavlynska has continued working as an employment lawyer in Frankfurt and is helping Ukrainians seek refuge in other countries.

Pavlynska condemned many Russian lawyers for supporting the war and President Vladimir Putin. 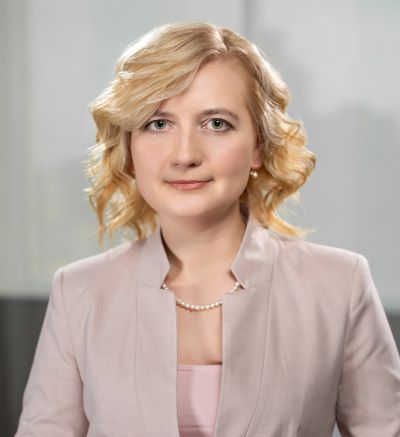 “We are deeply disappointed with the approach of Russian lawyers,” Pavlynska said. “As lawyers, we should stand for the rule of law.”

ABA President Reginald M. Turner Jr. echoed Pavlynska’s message about the rule of law in remarks prerecorded for the webinar audience, saying the war and crisis had to be viewed through the lens of the “fundamental premise to advance liberty and justice for all.”

“Lawyers believe not in the rule of force, but in the rule of law. We believe that human rights are the bedrock of life and liberty. Our stake in the rule of law compels us to denounce the Russian invasion and rededicate our support of international institutions that promote peace and security,” Turner said.

Speaking from London, Ukrainian Bar Association President Anna Ogrenchuk said she wants the international community to form a special tribunal to investigate war crimes after documented atrocities in Bucha. Ogrenchuk says it’s likely war crimes have been committed in other parts of the country where the Russian military is present. She urged the American legal community to use its clout to support the tribunal and gather evidence.

“We need your expertise. We need your help in investigating and documenting all war crimes —when the crimes are still been committed,” Ogrenchuk said.

More should also be done to cripple the Russian economy, she added. The UBA has released several open letters, including ones to international companies and businesses operating in Russia and international law firms, legal associations and regulators.

“Every day of war costs Russia about $20 billion, and this money comes from companies who pay taxes in Russia,” Ogrenchuk said. “A full economic embargo is the only alternative to a very long and damaging war in Ukraine.”

There are approximately 60,000 attorneys in Ukraine, and about half of them are women, Ogrenchuk added. She said her bar association estimates that two-thirds of female lawyers have left the country, but women are currently doing the bulk of legal work because many male lawyers have enlisted in the military.

President Joe Biden announced last month that the U.S. will allow 100,000 refugees from the Russian war on Ukraine into the United States and provide more than $1 billion for humanitarian assistance.

Even so, Jill Marie Bussey, an attorney and director for public policy at the Lutheran Immigration and Refugee Service, urged the Biden administration to move faster.

On its website, LIRS makes several policy recommendations including “rebuilding a robust, well-resourced refugee program that is able to effectively process refugees from a variety of regions across the globe.” It also calls for more U.S. refugee program officers to process applications and expediate the reunification of families.

“We saw this similar foot-dragging in the Afghan crisis, and we need to be more nimble, more urgent in our action to provide immediate support to those who are in need,” Bussey said.

The Biden administration has granted Temporary Protected Status for Ukrainians already in the U.S., as urged by the ABA president. That status will allow Ukrainians who were in the United States as of March 1 to remain for 18 months.

Richard Pena moderated the panel. He is vice-chair of the Rights of Immigrants Committee within the ABA Section of Civil Rights and Social Justice.