Roula Allouch is leading efforts to stop cyberbullying and discrimination 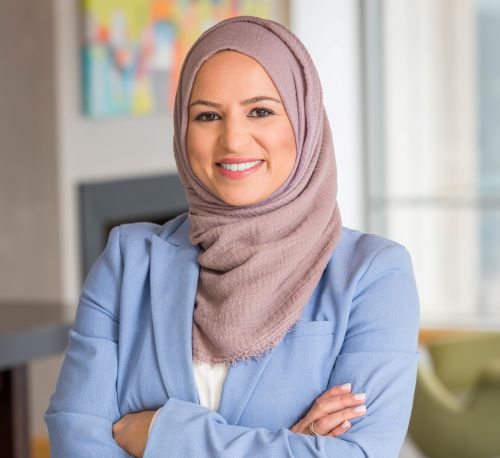 Roula Allouch thinks about young people in her community whenever her civil rights work starts to feel daunting.

“Working with youth helps refocus and recenter me on the reason that we’re doing it all: to make things better for the generation coming after us,” says Allouch, of counsel at Graydon Head & Ritchey in Cincinnati. “To the extent that I dealt with challenges as an Arab-American kid or as a Muslim kid growing up in a Muslim household, I don’t want the next generation of Arab-American kids and Muslim youth to be dealing with those same challenges.”

Allouch’s interest in interacting with youth intertwines with her work as co-chair of the Section of Civil Rights and Social Justice’s Bullyproof Committee, which leads a comprehensive public service initiative designed to stop bullying by addressing legislation and educating school administrators, parents, students and lawyers.

Its members helped put forward Resolution 504, a measure urging lawmakers to pass legislation that requires law enforcement to investigate cyberstalking, stronger penalties for crimes involving bullying or harassment through social media or other online communications and a private right of action for victims.

The resolution also asks law enforcement to provide training to officers to aid them in identifying and investigating various types of cyberstalking, including cyberbullying, while also respecting the right to free speech.

Cyberstalking is a “relatively new crime” that has grown over the past 20 years, according to a report accompanying the resolution. It cites 2021 data from the Pew Research Center that found four in 10 Americans experienced some form of online harassment. A growing number experienced “severe harassment,” which includes sexual harassment, sustained harassment, physical threats and stalking.

“My concern was around the challenges that cyberstalking and cyberbullying were presenting, and understanding these were issues that youth were dealing with frequently because of the rise of the use of social media and cell phones,” Allouch says of the importance of the resolution, which the House of Delegates passed overwhelmingly at the ABA Annual Meeting in August.

Allouch connects to culture through legal work and community service

Allouch grew up as the third of six children in Berea, Kentucky, where she experienced what she calls “the picture-perfect childhood.”

She spent a lot of time outside with her siblings and friends, riding her bike and playing kickball in her neighborhood. Her parents, who immigrated to the United States from Syria in the early 1970s, cooked Syrian food and spoke Arabic at home.

“I certainly grew up in a household that was both proud of our Arab and Muslim culture and very American,” Allouch says. “We would joke that our parents would speak to us in Arabic, and we’d always respond in English. But now as an adult, I’m grateful that I’m able to communicate with people in both English and Arabic. It’s an important connection to culture.”

Allouch’s family, which also loved watching basketball, later moved to Lexington, Kentucky. She joined all her siblings in attending the University of Kentucky, where she earned her bachelor’s degree in economics and business administration in 2002.

While Allouch was excited about her first job in corporate America, she discovered she was more passionate about law and advocacy, particularly for her Arab and Muslim communities. Even though it was not as common at the time for someone with her background to go to law school, she says she decided to follow her gut instincts.

“I very quickly realized that I needed to be working in a way that I could have an impact on people’s lives and try to have an impact on policy and the community and world around me,” says Allouch, who graduated from the University of Kentucky’s law school in 2006 and now practices as a trial attorney.

In addition to handling civil rights, tort and personal injury litigation, Allouch serves as chair of the national board of directors of the Council on American-Islamic Relations, the country’s largest Muslim civil rights and advocacy organization. She considers it a privilege as well as another way to put her passion into practice.

“I always tell younger lawyers, people who are in law school and especially people of diverse backgrounds, that there are so many opportunities that can come from being a lawyer that you may not initially even think about,” she says.

Michael Debbeler, the chair of Graydon’s Executive Committee, points out that the firm hires great lawyers but places nearly equal importance on what its employees do outside the office. He encourages them to be active in diverse organizations and has been amazed by Allouch’s leadership in CAIR, he says.

“What she has been able to do with that organization and in the community, especially in these times, has just been so inspiring,” Debbeler says. “We think the world of her, both as a lawyer doing the legal work, and more importantly, for who she is and what she does.”

Allouch joined the ABA during her first year of practice at what was then O’Hara, Ruberg, Taylor, Sloan & Sergent in Crestview Hills, Kentucky.

Allouch continues to connect the two bar associations, serving as the KBA delegate to the ABA House of Delegates. Among her other ABA roles, she chairs the Center for Human Rights Executive Board and sits on the CRSJ Council.

She began assisting with the Bullyproof initiative when it was created in 2013 by then-YLD chair Mario Sullivan, who now also serves as one of its co-chairs. Allouch, Sullivan and third co-chair Elizabeth Palmer have continued its work in CRSJ, addressing bullying in various ways.

They visited middle schools and talked with students about how to handle bullying. They hosted educational programs, including a webinar focused on preventing anti-Muslim bullying in schools during National Bullying Prevention Month last October. They also have brought attention to workplace bullying and attorney bullying.

“Roula has always been committed to doing what we can to end bullying in all its different forms,” says Sullivan, a partner at Johnson & Sullivan in Chicago. “The [recent] resolution was just one part of many works that we’ve done in the past and continue to do.”

The Bullyproof Committee began preparing Resolution 504 after a CRSJ council member mentioned a friend whose daughter dealt with a difficult situation involving cyberstalking and cyberbullying.

“We as a society need to do more to protect those who are being cyberstalked and cyberbullied, and I’m optimistic that now having this clear ABA policy will allow us to advocate for legislation and regulations that will provide better support to individuals and organizations who find themselves in that position,” says Allouch, who adds that she has experienced cyberstalking and cyberbullying in her professional capacity.

In addition to other community service, Allouch is vice-chair of the board of directors of the Muhammad Ali Center in Louisville, Kentucky. She also mentors undergraduate students and young attorneys, along with meeting regularly with local youth groups.

For Allouch, this work is essential because other people in her life supported her and she wants to pay that forward.

“In meeting with younger kids, especially when it’s members from my own community, Arab kids or Muslim kids, I always want to make sure they are reminded that they should feel proud of who they are and stand up straight, with their heads held high, and not let biases or negative things they hear about themselves hold them back or deter them from dreaming big,” she says.

“I remember the times that I got that message as a kid, so I always try to deliver that to youth.”