The U.S. Supreme Court has several blockbuster cases in its new term—on gay and transgender rights, federal immigration enforcement and gun regulation. But before it gets to any of those, the court on the first day of the term will take up two criminal law cases raising significant questions, even though only a handful of states are affected by each.

In Kahler v. Kansas, the first case up for argument on Oct. 7, the question is whether the U.S. Constitution permits a state to abolish the insanity defense. Only four states besides Kansas—Alaska, Idaho, Montana, and Utah—do not recognize that defense.

In Ramos v. Louisiana, the justices will consider whether the 14th Amendment fully incorporates against the states the Sixth Amendment’s guarantee of a unanimous jury verdict.

“Both of these cases speak to a larger lesson,” says Brian W. Stull, a senior staff attorney with the American Civil Liberties Union. “The court, with justices on the left, center, and right, has been vigilant in insisting at a minimum on the common-law protections that defendants enjoyed at time of the founding.”

In the Kansas case, James Kraig Kahler was convicted and sentenced to death for the 2009 murders of his estranged wife, his two teenage daughters, and his wife’s grandmother.

Experts for the defense and the prosecution concluded that Kahler suffered from obsessive- compulsive personality disorder, major depressive disorder, and borderline, paranoid, and narcissistic personality tendencies.

The defense expert further concluded that Kahler’s depression at the time of the shooting was so severe that Kahler did not make a genuine choice to kill his family members. Kahler’s lawyers proposed jury instructions on both diminished capacity and insanity as an affirmative defense, but the trial court rejected them as prohibited by Kansas law.

“Kansas has reasonably determined that individuals who voluntarily and intentionally kill another human being are culpable, even if they do not recognize their actions are morally wrong,” the state attorney general’s office says in its merits brief. (The office declined an interview request.) 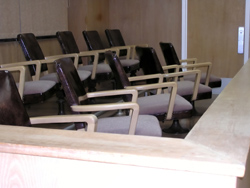 After the Kansas Supreme Court rejected his challenge to the mens rea approach and upheld his conviction, Kahler appealed to the U.S. Supreme Court on the argument that the Eighth Amendment’s cruel and unusual punishment clause and the 14th Amendment’s due-process clause bar the states from eliminating the insanity defense.

“This is recognizing what has been there all along—the capacity for moral judgment as a prerequisite for criminal culpability,” says Sarah O’Rourke Schrup, a clinical associate professor at Northwestern University law school and the director of the school’s Supreme Court Clinic.

“The mens rea approach removes this moral component,” says Schrup. “Why, for someone in Kansas and these other states, it is enough only if the person acts intentionally?”

Kahler has broad support in amicus briefs from defense lawyers, the psychiatric community, professors and the American Bar Association.

“The Kansas statute at issue in this case allows a defendant to be convicted of a crime and sentenced to death, even when his mental disorder prevented him from understanding that his actions were wrong,” the ABA brief says. “For nearly four decades, the ABA has consistently opposed state statutes that permit this result, given their incompatibility with the Anglo-American legal tradition and with commonly-accepted rationales for punishment.”

Stephen J. Morse, a professor of law and law in psychiatry at the University of Pennsylvania, co-wrote an amicus brief in support of Kahler signed by 290 criminal law and mental health professors.

The predominant modern test for legal insanity dates to the 1843 English decision known as M’Naghten’s Case, “but some form of an affirmative defense of legal insanity existed many centuries before that” in English law, the brief says.

“People who lack the capacity to know what they are doing or can’t control themselves through no fault of their own as a result of severe mental disorder are simply not responsible agents in our legal tradition and do not deserve to be punished,” Morse says.

Kansas has the support of U.S. Solicitor General Noel J. Francisco, who argues that even though the federal government (as well as the justice systems of the U.S. military and the District of Columbia) recognize insanity as an affirmative defense, “neither the Due Process Clause nor the Eighth Amendment demands that a state excuse criminal conduct under an insanity test focused on whether the defendant could tell right from wrong.”

“This is an area where the states have traditionally enjoyed a lot of flexibility,” she says. “These are complex, multilayered issues subject to developments in medicine, the law, and social attitudes.”

Defendants may still present evidence of a mental disease or defect to disprove a prosecutor’s argument that they possessed the necessary mens rea, she says.

The jury case involves Evangelisto Ramos, who was convicted in the 2014 murder of a woman whose body was found stabbed and stuffed in a trash can on a New Orleans street. Ramos had had a sexual encounter with the woman, and DNA evidence linked him to her murder.

Ramos was found guilty of second-degree murder and sentenced to life in prison without the possibility of parole. The jury verdict was 10-2. Since its 1898 state constitution, Louisiana has allowed juries to convict a criminal defendant of any noncapital felony with the concurrence of only nine of 12 jurors.

Advocates for Ramos argue that Louisiana was motivated by racism.

“Louisiana took a path that was completely for the purposes of racial discrimination,” says the ACLU’s Stull, who wrote an amicus brief in support of Ramos. “Nine out of 12 means you can exclude the voices of black people.”

Louisiana argues in its brief that there is no information about the racial makeup of Ramos’ jury in the record, and thus, no evidence his conviction was motivated by racial animus.

Louisiana voters last fall approved a state constitutional amendment that requires unanimous jury verdicts for offenses committed on or after Jan. 1, 2019. But the question remains relevant for Ramos and others in the state convicted by nonunanimous verdicts.

Oregon became only the second state to allow nonunanimous verdicts in 1934, after a sensational trial in which a Jewish man was convicted of manslaughter but fell one vote short of convicted on a murder charge.

Lawyers for Ramos, backed by amicus briefs from the ABA, the ACLU, the NAACP Legal Defense and Educational Fund, and others, argue that it is settled law that the Sixth Amendment’s jury trial clause requires unanimous verdicts, and the 14th Amendment applies that requirement to the states.

“The common law demanded unanimity for hundreds of years leading up to the founding, and the framers codified that common-law understanding in the Sixth Amendment,” Ramos’ brief says.

Louisiana argues that the text of the Constitution never mentions a unanimity requirement. And “there is nothing to ‘incorporate’ against the states under the due process clause because, as noted, there is no underlying right to a unanimous jury.”

Oregon filed an amicus brief on Louisiana’s side which notes that the state has considered but stopped short of eliminating its nonunanimous jury system. But it calls on the court not to disturb the status quo.

“If this court were to overrule Apodaca, it would invalidate convictions in hundreds if not thousands of cases,” the state said.