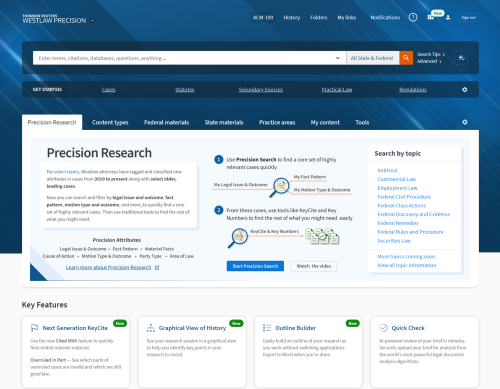 Westlaw Precision was introduced Wednesday and is the company’s first new version in more than four years. It has six new features that Thomson Reuters said will allow lawyers to precisely tailor searches and reduce the time spent on research.

In a news release, Thomson Reuters said the precision research feature in the new product allows lawyers to easily find and sort cases by legal issues and outcomes, fact patterns, causes of action, party types and other criteria. In addition, lawyers can use an enhanced version of Westlaw’s citation-checking service, KeyCite, to find relevant material.

In beta testing, the company said, lawyers were able to find relevant cases twice as fast “as those using traditional search methods” and its predecessor, Westlaw Edge, which was released in 2018.

In addition to precision research, the platform offers five other features, according to Thomson Reuters, including KeyCite Cited With, a function that allows lawyers to see related cases that have been cited together. Other features show parts of cases that have been overruled in part and a graphical view of research history. There is also a feature to keep or hide cases based on relevancy and a research outlining tool.

“We believe that this dramatically improves a lawyer’s ability to get what they want quickly,” Dahn said during the news briefing. “It saves them a lot of time and helps them reduce the risk of missing something important.”

Dahn said the new version means that lawyers will now have a precision research tool that allows them to find “the most on-point cases from the last 12 years” in addition to older, seminal cases, including those from the U.S. Supreme Court.

He noted that in its current form, the precision research tool has some limitations because of the vast amount of caselaw. Dahn said tagging all those cases was an “enormous undertaking,” and that developers were approaching caselaw topic by topic.

Thomson Reuters said it expects to cover an additional 15 topics in 2022 and 2023 and more unpublished cases.

Dahn said the product would also be available as an upgrade for Westlaw Classic and Westlaw Edge customers at a “reasonable premium.”

Jeff McCoy, a Thomson Reuters spokesman, declined to disclose how much that the product would cost, writing in an email that “many factors” determine pricing.