Uniting for Ukraine draws criticism and praise from resettlement groups 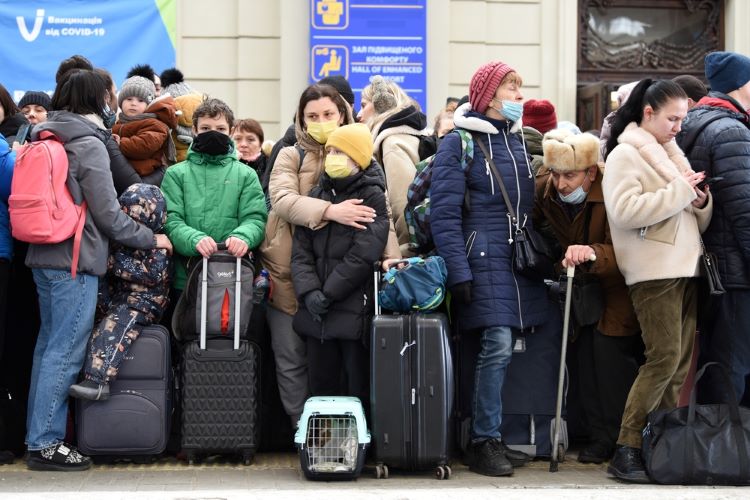 People in a railway station of the western Ukrainian city of Lviv wait for the train to Poland in February. Photo from Shutterstock.

Although some resettlement groups have welcomed President Joe Biden’s streamlined humanitarian parole program for Ukrainians fleeing the war, the initiative also has sparked frustration and claims that other at-risk people are not being offered the same protections.

Melineh Kano, executive director of the Chicago resettlement agency RefugeeOne is among advocates who are critical of the Uniting for Ukraine program, which opened for applications on April 25.

Humanitarian parole allows people to temporarily stay in the U.S. without an immigrant or nonimmigrant visa. Kano calls Biden’s initiative, which offers up to two years of parole, a “Band-Aid” because it does not give Ukrainians full refugee status.

Her organization is working with about 130 Ukrainian parolees as well as families and relatives trying to get their loved ones to the U.S. And Kano believes the government should use the existing refugee admissions program instead of creating “yet another” temporary initiative.

“If people are eligible to come as refugees; if they have a well-founded fear of persecution; if they cannot return home, then use the mechanism that is already in place,” Kano says. “This is a clear-cut situation where Ukrainians should be admitted as refugees.”

For some resettlement organizations, there also is concern about what will happen when the clock runs out on the two years of parole being offered to 100,000. With no path to permanent residency or citizenship, they could face an uncertain future when their parole ends.

And if the war is still raging, applying for asylum in the clogged immigration system could take years. It also could place a greater burden on resettlement groups as they help Ukrainians stay in the country lawfully, Kano says.

To be eligible for the program, Ukrainians must secure sponsorship from a legal U.S. resident who can provide financial support, be fully vaccinated and pass security and biography and biometric screening checks.

More than 6.9 million refugees had fled Ukraine as of June 1. And as of June 3, 48,000 people had applied for the parole initiative, 30,000 Ukrainians had received authorization to travel and about 7,000 people had arrived, according to the Department of Homeland Security.

“We are proud to deliver on President Biden’s commitment to welcome 100,000 Ukrainians and others fleeing Russian aggression to the United States,” said Secretary of Homeland Security Alejandro N. Mayorkas in an April statement. “The Ukrainian people continue to suffer immense tragedy and loss as a result of Putin’s unprovoked and unjustified attack on their country.”

The government says it will turn away Ukrainians entering the U.S. by land unless they have a valid visa or pre-authorization to travel through the initiative.

Biden also has renewed the Lautenberg Amendment, which allows members of persecuted religious groups to reunite with family members living legally in the U.S. In addition, the Department of Homeland Security also gave Ukrainians Temporary Protected Status, or TPS, if they can show continuous residence in the U.S. since April 11 and a continuous physical presence since April 18.

But the different protections are causing confusion, according to Kano, who says there is a lack of government guidance and coordination with resettlement groups. Humanitarian parole typically lasts for no more than a year. Temporary Protected Status lasts up to 18 months. The United for Ukraine Program offers up to two years of parole. And other resettlement organizations argue the government should bolster the existing refugee admissions program.

However, resettling in the U.S. as a refugee is a years-long process. And Elizabeth Foydel, private sponsorship program director of the International Refugee Assistance Program, welcomes the speed with which applications are being processed through the initiative.

“Rather than having these ad hoc programs, we would like to see longer-term programs that have built-in flexibility to accommodate the needs of an emergent humanitarian crisis,” Foydel adds.

She says that could happen with changes to the refugee admissions program and a permanent private sponsorship program for refugees.

Adonia R. Simpson, Director of Policy and Pro Bono for the ABA Commission on Immigration, praises the Uniting for Ukraine initiative for allowing people to apply for work authorization once they arrive. In addition, she says the government has said Ukrainians will be eligible for cash assistance and medical benefits.

But Simpson adds, “The big question will be [what happens] if this conflict continues for a long time. What is the long-term plan?” 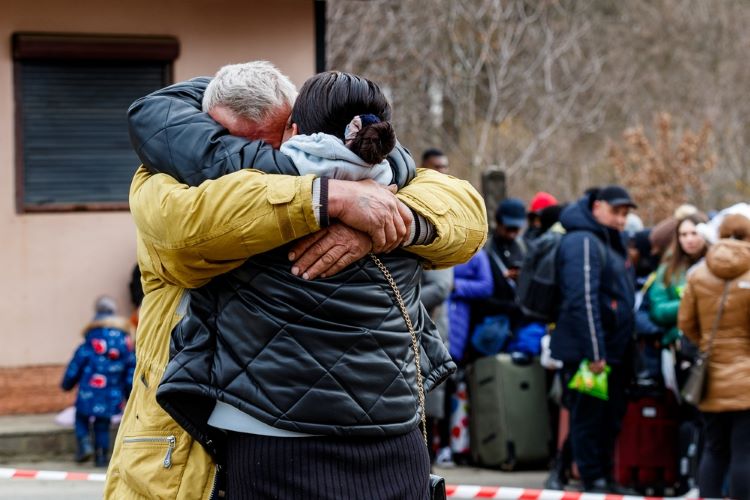 A man says goodbye to his wife who is fleeing Russian aggression in February. Photo from Shutterstock.

Both Simpson and Foydel say Congress would need to step in to allow Ukrainians to extend their time in the U.S. after the two-year period of parole elapses.

But the failure of lawmakers to move forward with legislation dubbed the Afghan Adjustment Act so more than 36,000 Afghans can get permanent status or citizenship after fleeing the Taliban makes Kano doubtful. In May, the measure hit a brick wall when it was left out of a Ukraine spending bill, even though Biden had pushed for its inclusion.

Ukrainians could face the same uncertainty over the next two years when they come to the end of their parole. Kano says resettlement organizations could be left to shoulder the burden. With the Afghan Adjustment Act stalled, she says her organization is using general funds to hire attorneys and pay their fees as her group helps dozens of Afghans navigate the immigration system.

“If I had known then that the Afghan Adjustment Act was not going to happen, we would have reconsidered our decision about how many people we were going to resettle because that’s a major piece that fell apart,” Kano says.

Resettlement groups also say the Biden administration’s response to the Ukraine crisis is exposing disparate treatment of other people who are fleeing persecution or war-torn countries in Central America, Africa and Asia.

The International Refugee Assistance Program says applications under Uniting Ukraine program are free. Meanwhile, Afghans have to pay $575 for humanitarian parole programs. And no proof of targeted violence is required for Ukrainians, while Afghans must show they were targeted by the Taliban. Ukrainians also can skip the wait times required for other humanitarian parole applicants.

In May, 144 immigrant, labor, faith, civil rights and legal organizations sent a letter to Biden demanding an investigation into how TPS designations are determined.

While the groups welcomed the TPS designation for Ukraine, Afghanistan and Cameroon, it said the Biden administration had “thus far practiced a de facto policy of refusing or delaying designation of TPS for Black- and brown-majority countries that clearly meet the statutory requirements.”

American Immigration Lawyers Association President Allen Orr Jr. says the United for Ukraine program exposes a “lack of unified policy that addresses humanitarian concerns for everyone,” whether its people fleeing war-torn countries or people who came to the U.S. as children who are still waiting for relief through the Deferred Action on Childhood Arrivals program.

“Anything that’s based on nationality and country of origin is a problem because you’re picking winners and losers. And there’s no reason to do that,” Orr adds.

Smita Rao Dazzo, senior director, legal and asylum, for the resettlement organization HIAS, says the Uniting for Ukraine program shows that where there “is a will, there is a way.” She agrees there should be a more uniform approach to helping refugees.

“There are a lot of people around the world that deserve the same protections and the same benefits that the United States is giving Ukrainians,” Dazzo says.