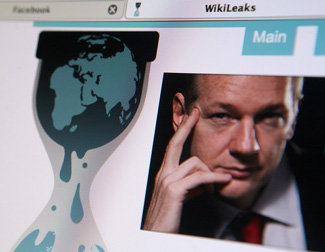 Julian Assange is the founder of WikiLeaks, a nonprofit organization that publishes news leaks and classified media provided by anonymous sources. Image from Shutterstock.

Lawyers for WikiLeaks founder Julian Assange are suing the CIA and former CIA director Mike Pompeo for allegedly recording their conversations and copying data from their electronic devices.

In a complaint filed in federal court in New York on Monday, Margaret Ratner Kunstler and Deborah Hrbek said they aim “to protect their fundamental constitutional right to be free from unreasonable searches and seizures in violation of the Fourth Amendment of the Constitution of the United States.”

They are joined in their lawsuit by journalists John Goetz and Charles Glass, as well as security company Undercover Global and David Morales Guillen, its founder and former CEO, as defendants.

The Agence France-Presse via the Guardian and Courthouse News Service and Bloomberg have coverage.

The plaintiffs, all of whom are American citizens, said in their complaint they visited Assange while he was living under political asylum at the Ecuadorian embassy in London. They were required to surrender their phones and other devices. They allege that without their knowledge or consent, employees of Undercover Global copied information stored on their devices.

They allege further that the security company then provided that information to the CIA with Pompeo’s approval. Pompeo later would work as the U.S. secretary of state in the Trump administration from 2018 to 2021.

“While the named plaintiffs initiate this action, the practices complained of violate the rights of well over 100 American citizens who visited Assange at the Ecuadorian embassy in London, England … during his sanctuary, including attorneys who were then representing him, journalists there to interview him, and even doctors who were then treating him, each of whom have a privileged and confidential connection to the asylee and other clients, sources and patients, some of whose confidential information was stored on their electronic devices,” according to the complaint.

The plaintiffs also allege that between January 2017 and about April 2018, Pompeo authorized a surveillance system that placed hidden cameras around the Ecuadorian embassy. They said the footage from these cameras was then shared with the CIA.

Assange is awaiting extradition from England to the United States, where he faces 18 federal charges relating to his obtaining and disclosing of classified information, Bloomberg reports.

Robert Boyle, a New York attorney who represents the lawyers and journalists in their suit, told reporters that the alleged spying on Assange’s lawyers means that his right to a fair trial has “now been tainted, if not destroyed.”

“The recording of meetings with friends, with lawyers and the copying of his attorneys’ and friends’ digital information, taints the criminal prosecution because now the government knows the contents of those communications,” Boyle reportedly said.

According to Bloomberg, a CIA spokesperson declined to comment on the suit.