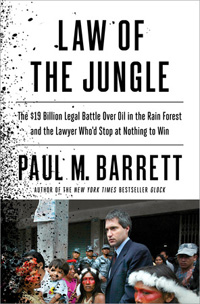 In February 2011, an Ecuadorean court found the Chevron Corporation liable for environmental damage caused by oil-drilling activities in the rainforest region El Oriente in the 1970s and 1980s. Chevron, which in 2001 purchased Texaco (the company which had actually operated the oil wells), was ordered to pay $19 billion to the class-action plaintiffs who brought the suit. These plaintiffs, a collection of small farmers and indigenous peoples, had the support of a team of Ecuadorean and American attorneys, including the charismatic Steven Donziger. Donziger, a media-savvy graduate of Harvard Law, had helped them gain the support of variety of environmentalists and celebrities.

Although it is tempting to fit this into a simple narrative–either “scrappy band of lawyers wins enormous victory for oppressed people against an evil corporation” or “responsible corporation preyed upon by voracious plaintiffs attorneys over scurrilous accusations”–the truth just isn’t that simple. And the $19 billion verdict was far from the end of this story.

“When you combine the rainforest, multinational oil company and indigenous tribespeople, most people think they know the story with just those three facts,” said Paul M. Barrett, author of the new book Law of the Jungle: The $19 Billion Legal Battle Over Oil in the Rain Forest and the Lawyer Who’d Stop at Nothing to Win. “Life is always more complicated than that.”

Barrett first reported on this case when he wrote a profile of Donziger for Bloomberg Businessweek, where he is assistant managing editor and a senior writer. In this Modern Law Library podcast, he discusses with moderator Lee Rawles the wild twists and turns this case has taken, both before the verdict and afterwards.

As of this publication, legal battles are still being fought as accusations of fraud, forgery, bribery and conspiracy have been leveled against Donziger and the rest of the plaintiffs’ legal team. And as Barrett explains, the result of those battles could have severe and wide-ranging effects for all class-action lawsuits against major corporations.

AM Law Litigation Daily: “The Global Lawyer: A Review of Paul Barrett’s ‘Law of the Jungle’”

New York Law Journal: “The Law of the Jungle”

Kirkus Reviews: “Law of the Jungle”

Fortune: “Chevron and Ecuador: 2 books and a smear campaign”

Politico: “The Fall of the House of Boggs: The bizarre Ecuadorean lawsuit that destroyed a Washington institution”

Paul M. Barrett is an assistant managing editor and senior writer at Bloomberg Businessweek. He is the author of the New York Times bestseller Law of the Jungle: The $19 Billion Legal Battle Over Oil in the Rain Forest and the Lawyer Who’d Stop at Nothing to Win, Glock: The Rise of America’s Gun, American Islam: The Struggle for the Soul of a Religion, and The Good Black: A True Story of Race in America. He lives and works in New York City. (Photo by Nadine Natour.)