Are criticisms during SCOTUS confirmation hearings a disservice to viewers? 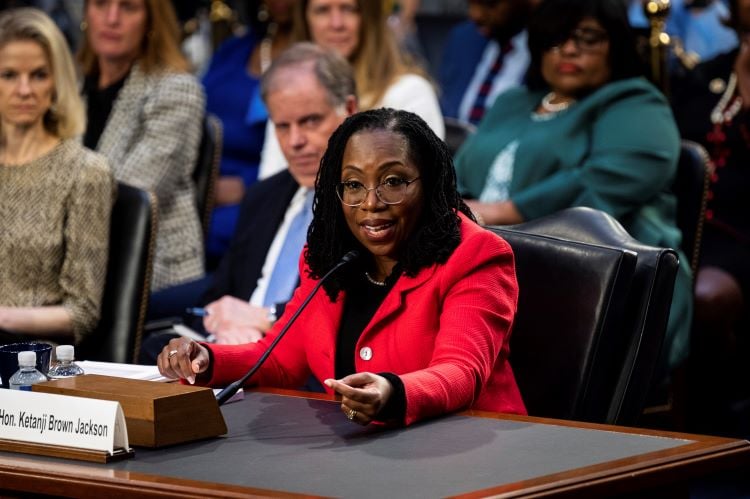 Judge Ketanji Brown Jackson speaks in late March during the Senate Judiciary Committee hearings to consider her nomination to the U.S. Supreme Court. Photo by Michael Brochstein/Sipa USA via the Associated Press.

Everyone familiar with this column over the last five years knows its central focus is the intersection of law and pop culture. Most of my installments focus on various forms of media and my observations regarding their law-related issues. There are times when readers will suggest topics by reaching out via email, which I always love receiving. More often than not, though, it’s simply my love for pop culture in the law that allows me to derive legal topics from the media I’m ingesting.

Pop culture has an expansive definition. If I haven’t explained my interpretation in the past, I’ll clarify it now: I believe any form of information transmitted through any media commonly consumed by the masses is pop culture. This definition is an excellent baseline for both regular readers and those new to my column; moreover, it gives you an idea of how I source the material I ultimately use.

I try not to stick my nose too far into politics when writing on law and pop culture. While I inevitably discuss societal issues, I try to stay away from the contested aspects of the partisan process. But sometimes, certain forms of media relay information to the popular masses that I simply can’t help but comment on. That’s especially the case when I see or hear something I believe needs clarification—not only for members of the bar who may not have a background in that knowledge but also for laypeople who could potentially be misled by the particulars fed to them. This is the case with Ketanji Brown Jackson’s confirmation proceedings, which riveted much of the nation via livestreams, news outlets, social media and video-sharing services like YouTube.

Judge Jackson started her career as a federal public defender, served as a judge on the U.S. District Court for the District of Columbia and then as an appellate jurist on the U.S. Court of Appeals for the D.C. Circuit. Over the course of weeks, she became enmeshed in the political parade we experience every time a sitting president nominates a potential Supreme Court justice.

The confirmation process is an integral part of our country’s judicial history and future. The historical precedent can be traced back to 1916 when the U.S. Senate held its first hearing for a Supreme Court nominee—Justice Louis Brandeis. In a previous column, I have mentioned the rise of the “public” confirmation hearing and how, over the decades, audiences have become more inclined to tune in via television and other media. Moreover, as we saw with the Brett Kavanaugh confirmation years ago, these matters have also become ingrained in our pop culture through mechanisms, such as the parody portrayed via shows like Saturday Night Live.

The ramifications for our nation when choosing a Supreme Court justice for a lifetime appointment goes without saying. Consequently, extraordinary amounts of scrutiny are vital to (hopefully) properly vet those who will assist in shaping the understanding and interpretation of our constitutional rights and the laws that govern our everyday lives. However, scrutiny, while it has its place and purpose, can only go so far and should be meted out by individuals with a solid understanding of the questions they are asking.

Sadly, in Jackson’s case, that didn’t play out for the national public as we watched the live hearings or caught the “highlights” on YouTube or some other social media platform. 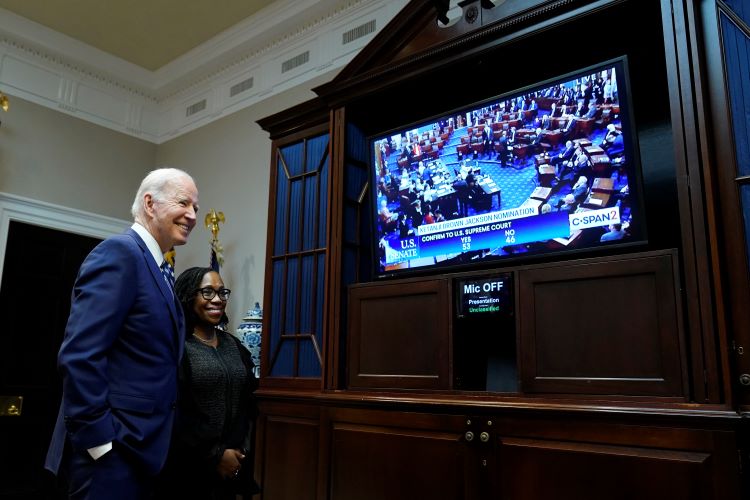 In early April, President Joe Biden and Judge Ketanji Brown Jackson watch from inside the Roosevelt Room as the U.S. Senate votes on her confirmation. Photo by Susan Walsh/The Associated Press.

As I watched the hearing through livestreams and various highlight videos, it became increasingly clear that the most pointed accusations and critical questions regarding Jackson’s qualifications to sit on the nation’s highest court—which is an appellate court—focused on her record as a fact finder and sentencing judge. Never mind the reality that, as a Supreme Court justice, she would never be in a position to sentence an individual. Nevertheless, that was the focus of most of her detractors.

The vast majority of questions attempting to call into doubt her judicial integrity fixated on the sentences she handed down to individuals convicted of child-pornography related offenses.

Now, I’ve never been a fan of politicians in general. Don’t get me wrong, I’m a criminal defense attorney, and I know my profession doesn’t always have the best reputation in the general public. Still, there’s something inherently suspect regarding individuals who must cater to constituents in hopes of gathering enough favor to keep their jobs. Nevertheless, I try to give them the benefit of the doubt. Regardless, it’s been difficult watching them question Jackson about a very specific and nuanced area of criminal defense: federal sentencing regarding child pornography-related offenders.

It strikes me as disingenuous that these members of the Senate, who obviously belong to the legislative branch that initially created the U.S. Sentencing Commission responsible for the sentencing guidelines scheme, seem to have absolutely no understanding of how that system currently plays out in practice. I say that in part based on their questions generally; however, I also say that based on their apparent lack of understanding of how judges across the nation view and apply the guideline enhancements they are using to criticize Jackson.

For those who don’t know, the guidelines regarding child pornography-related offenses are incredibly antiquated. Those particular guidelines were created in 1987 when personal computers were close to nonexistent, and the internet wasn’t available to everyone at any time. As such, when the applicable guidelines were promulgated, the exchange of child pornography was almost always accomplished via mail sent through the postal service or hand-to-hand exchanges.

Consequently, it made sense to have enhancements available that dealt with situations such as using a computer, specific age range modifiers and additional points added to the calculus based on the sheer volume of images found. Those circumstances were outliers, and they needed to be accounted for.

Sadly, the distribution of child pornography has become much more widespread since 1987. Offenders almost always use computers to commit these crimes, and often times they download files blind: They don’t know what or how many illegal images they are going to get.

Essentially, certain guideline enhancements such as computer use, volume and victim age no longer accomplish the original goal of distinguishing among offenders based on their level of culpability and providing additional and necessary punishment to those who show aggravating conduct. Instead, these enhancements apply almost across the board to all offenders.

As such, federal judges have long since used their discretion to only apply particular enhancements in these types of cases where they are applicable and necessary based on the facts. The trend has risen to the level that, in December of 2012, the United States Sentencing Commission issued a report to Congress discussing the need for revision among these specific guidelines “in light of feedback from judges as reflected in their sentencing decisions.”

For whatever reason, the senators who questioned Jackson throughout her confirmation hearing failed to acknowledge this trend. Instead, they spent their time attempting to paint Jackson as an outlier who favors these specific types of offenders.

ABAJournal.com: “‘I am the dream and the hope of the slave’: Ketanji Brown Jackson sees promise in historic confirmation”