Can John Mayer make law textbooks a thing of the past? ‘It’s fun pushing the envelope,’ he says 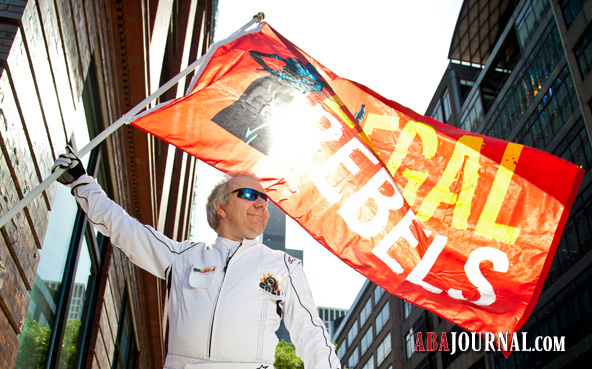 “They might be buying something else,” he says, “or they’ll be getting their course materials for free.”

Friends and colleagues describe Mayer, the executive director of the Center for Computer-Assisted Legal Instruction, as someone who advocates for change. Sometimes, they say, it makes more conservative academic types uncomfortable.

Change, Mayer says, is always uncomfortable, but law schools should accept that–thanks to technology–change will be constant for the next decade.

“It’s been fun and frustrating,” Mayer says about his work in an often Luddite profession. “It’s fun pushing the envelope, but frustrating because people do not want to change.”

A nonprofit consortium of law schools, Chicago-based CALI produces online interactive tutorials written by law professors. “It gives students a hypothetical and a flowchart that walks through various choices,” says Mayer, who has undergraduate and graduate degrees in computer science.

CALI grew from 1970s projects with the Stanford Research Institute and was incorporated by Harvard Law School and the University of Minnesota in 1982. Law schools that belong to CALI pay $7,500 a year for membership. In exchange, students get unlimited access to the center’s library.

Mayer joined CALI in 1994 after spending seven years as director of computing services at Chicago-Kent College of Law. Shortly after starting, center leaders told him that the organization might shut down.

For his job interview, Mayer had brought a list of 50 project proposals. The suggestions that came to fruition include software for faculty to write tutorials and book readers like the Franklin AnyBook.

“This was 1994, before widely available Internet,” he says. “Faculty were just starting to get PCs on their desktops.”

“At a time when people were not ready to use technology, he was out there doing it anyway,” says Ed Walters, the CEO of Fastcase, the online legal research company. “He’s always had confidence that things will eventually come around.”

Previously, professors wrote CALI material on a volunteer basis or received grants. Mayer decided to provide authors with financial incentives to get more material. CALI now pays $1,250 a lesson, and its library has about 950 lessons in more than 35 law school subjects.

Ron Staudt, a Chicago-Kent law professor who directs the school’s Center for Access to Justice & Technology, hired Mayer at the law school. While Mayer was there, he installed the school’s first network, email system and Internet connection.

“John is affable, pleasant and tough. You can’t roll over him, but he’s not going to scream and cause a scene,” Staudt adds. “He’s going to do his thing and make sure he protects the interest and the principles he’s got.”

Mayer, 52, is also known for his unique presentations at CALI’s annual Conference for Law School Computing. Recently he dressed up like a Lego figure, fashioning the yellow head out of a large plastic jar.

“He’s a very funny, mischievous guy,” Walters says. “A lot of people in this business take themselves too seriously, and there are lot of stern faces and suits. John is never one of those guys.”

A lifetime Chicagoan, Mayer lives in the city’s Andersonville neighborhood with his wife, Jane McBride, a lawyer with the Illinois attorney general’s office. Pet lovers, they founded the animal advocacy group Illinois Humane and are the proud owners of two dogs and four cats. They also foster pets.

“When you look at some of the problems these animals face, your problems are small in comparison,” Mayer says.