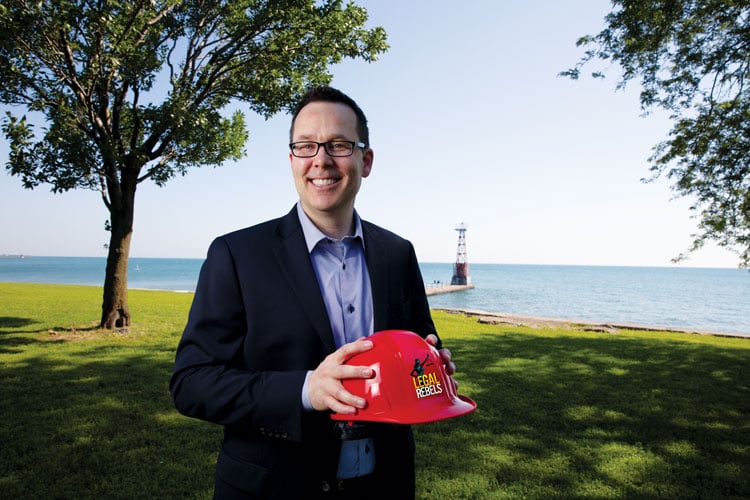 When his law firm enlisted then-litigator Daniel W. Linna Jr. for a presentation on evaluating potential trial outcomes, he presented his Honigman Miller Schwartz and Cohn peers with a hypothetical case—a teaching approach he used later as an adjunct at the University of Michigan Law School and Michigan State University College of Law.

On slide 21, he presented a decision tree: a chart with branches to show the progress of a class action through summary judgment motion, verdict and award. Linna went on to show how to assign a percentage likelihood to each potential outcome, including low-, medium- and high-value awards.

“That was my introduction to his budding interest in legal innovation,” says real estate lawyer Carl W. Herstein, Honigman’s chief value partner, who works on legal project management, alternative fee structures and matters relating to the cost-efficient practice of law. “I think it is fair to say that in his litigation work [Linna] developed an interest in analytics and the value of tools such as decision tree analysis to help both lawyers and clients understand risk and potential outcomes in terms of probability analysis. From seeds like this, his interest in legal innovation blossomed in his academic career.”

Linna took the improbable step of moving from equity partner at Honigman, where he represented General Motors and other corporations, to full-time engagements at MSU Law as assistant dean for career development and professor in residence, as well as director of its LegalRnD innovation institute. This fall he is leaving Michigan State for a year as visiting professor at Northwestern University’s Pritzker School of Law.

“I saw the potential for improving access to legal services,” says Linna, 47. “At too many schools, the law school is essentially an island unto itself. There are so many opportunities for law schools to work with industry practitioners like I’ve been doing at Michigan State and just as many opportunities, if not more, to work with the computer science department, the business school and so on.”

Linna insists his ratings aren’t rankings for schools or firms but “describe where they’re going.” His method frequently draws on the Toyota production system and its kata, or process of improvement and coaching.

Linna’s analytical approach predates his interest in law practice management. At the F.P. Miller industrial equipment companies, he applied the critical thinking skills of a U of M communications grad to organizing databases and translating process logic into SQL code.

“As their IT manager, I had to really get to know the business and figure out how to improve and automate processes. It was very data-driven—to capture metrics and key performance indicators, then using the technology to help people manage the business, create better outcomes, bring greater value to the customer.”

Still, Linna saw himself as a litigator. “From a young age I was told, ‘You should be a lawyer. You like to debate things and argue and get into the details about things.’ When I got to law school, it was kind of a surprise to find out there were lawyers who did things other than litigate.”

“He’s playing in an interesting area,” says Kenneth A. Grady, an MSU adjunct law professor and research fellow who team-taught with Linna. “He’s attempting to move lawyers from their comfort zone to a point where they use new skills and technologies.”

Students are the presenters in Linna’s classroom, pairing off on projects that apply the assigned reading and honing their communication skills. “I really want the students to be the stars,” Linna explains. “They’re working on real-world projects. They’re learning a lot while they’re doing these projects. And then the law schools are learning from this as well.” Their work often is judged by law and legal aid practitioners like Grady, a retired Wolverine Worldwide general counsel and former chief executive of Seyfarth Shaw’s SeyfarthLean practice management consultancy.

“He demands excellence in everything. If you are not giving over 100 percent, that’s not good enough,” says Irene Mo, a lawyer and ABA Center for Innovation fellow focused on marginalized Americans’ privacy and security. As a former LegalRnD assistant who studied Linna’s innovation curriculum, Mo is plugged in to Linna’s large practitioner network, which includes legal-hacker meetups in Chicago and Detroit. “Attention to detail was important, and everything we did was gold-standard work,” Mo says. “But I’ve never heard a single person say they were worse off for listening to him or working under him.”

“The idea of the classes at Michigan State—and I want to keep running this same sort of model at Northwestern,” Linna says, “is to establish the goal and help people figure out what the current state is, but help them learn and run experiments to make progress.

“You don’t just go into a wood-paneled room somewhere and figure out what ideas the smart people have. We’re all lawyers, we’re plenty smart and have great ideas. But especially when it comes to innovation and solving really wicked problems, we don’t know the answers.”