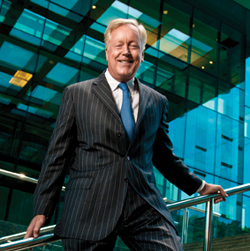 Twelve years ago, a two-page memo drafted at a breakfast meeting at Chicago’s Ritz-Carlton hotel outlined the visions of two leaders of midsize law firms to build the world’s leading global business-law firm.

That memo listed three attributes thought to define the top firms of the future, and it remains the master plan behind the unprecedented growth of one of the most successful law firms in the history of the profession, DLA Piper, helmed by global board chairman Francis B. Burch Jr.

“We haven’t veered from that plan in the past 10 years,” says Burch, 63, who also co-chairs DLA Piper’s U.S. operations with Lee I. Miller, the man he shared that breakfast with in 1999.

As clients were increasingly acquired by larger companies and capital flowed without respect for national borders, Burch, then managing partner of Baltimore-based, 250-lawyer Piper & Marbury, worried about how the firm would develop and retain access to the type of complex corporate transactional work he’d enjoyed as an associate. Similarly, Miller sought to diversify the practices of real estate-dominated, Chicago-based Rudnick & Wolfe.

“Globalization, consolidation, continued advances in technology were the biggest drivers of very significant changes in the world of the clients we served,” Burch says. “We also thought that our firms in their … configuration were not particularly well-equipped to prosper in the environment we saw developing. … We decided we had to be honest about where we were and where we would be if the world evolved the way we thought it would. That day we started the process of trying to build a firm to embody the characteristics we thought would define the leading future firms.”

Although neither Burch nor Miller predicted it at the time, the ’99 plan would also spawn the formation of DLA Piper in 2005 by a merger—deemed a “bit of a high-wire act” by Burch, between three firms: San Diego-based Gray Cary Ware & Freidenrich, Burch and Miller’s Piper Rudnick and London-based DLA, itself the result of a UK three-firm merger.

DLA Piper now boasts on its website about its 4,200 lawyers in 30 countries and annual revenues of nearly $2 billion.

“I’ve had the privilege and opportunity to work with presidents, prime ministers, kings and business leaders from all over the world,” says DLA Piper’s past chairman, former U.S. Sen. George Mitchell. “I’ve not met anyone who has been more dynamic and visionary than Frank.”

As for the future, Burch says the smart money is on continued segmentation and globalization in the legal market. For DLA Piper that means continued growth, especially in emerging markets such as Turkey and Brazil. Burch expects the firm, which has 76 offices worldwide, to double its size within the next three years.

“It will be very important to have a clear idea of who you are,” he says, “and whether that will be relevant in the rapidly changing world.”