Uganda’s legal system is based on English common law, but criminal defendants who can’t afford legal representation—and most can’t—aren’t appointed counsel unless they face a death sentence or life in prison.

“If you attend a court session, you will sometimes feel like shedding tears because of what these people go through,” says Kampala lawyer Gerald Abila, who in 2012 with an iPhone 3GS founded Barefoot Law, an online nonprofit that gives free legal advice to Ugandans through social media platforms such as Facebook and Skype. 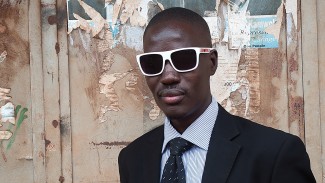 Gerald Abila. Photo by Will Boase.

Abila, 32, recognized that with more than 59 percent of the country’s population equipped with mobile phones, Barefoot Law has enormous potential to reach people in need of legal services.

He and other volunteer lawyers with the group give out legal information like questions for witness cross-examinations and instructions on how to apply for bail.

According to a 2012 Human Rights Watch summary, defendants in Uganda sometimes wait nine years for trial. It’s not unusual for someone to be jailed pretrial for a time period longer than a maximum potential sentence.

Corruption, Abila says, also clouds Ugandans’ views of justice. According to the U4 Anti-Corruption Resource Centre of Bergen, Norway, Uganda set reforms in place in 1986, but corruption remains widespread. “A lot of people don’t even know what the legal system does because of so many issues,” Abila says.

Besides legal advice, the Barefoot Law site offers employment, contract and will templates, which can be downloaded free. Abila supports himself doing consultant work with businesses and law firms, as well as through public speaking and work as a law lecturer at Kampala International University, his alma mater.

The son of educators who fled the wars of eastern Uganda for Kampala, the country’s capital, Abila started college studying statistics at Makerere University. However, he says, he often “would end up drifting from the statistics section to the law section.”

“I was always yearning to bring change. I realized there is nothing that can be achieved without people being equipped in the issues of the rule of law,” says Abila, who got the idea for Barefoot Law while traveling through rural Uganda with an uncle who was campaigning for a local councilor spot. When the locals found out Abila was a law student, they shared their many legal problems with him.

“These interactions opened up my eyes toward the current situation about the lack of justice in Uganda,” Abila says. “In certain areas it was simply unheard of.”

Abila was also influenced by a horrifying incident. He says he witnessed a man being beaten to death by a mob who suspected the man had stolen something. At the time, Abila wanted to tell them about the presumption of innocence until proven guilty.

“A part of me also realized these people were ignorant about how the [current legal system] works, or had simply lost faith in it, which ignited an urge in me to change this trend of things,” he says.

That urgency is part of the foundation of Barefoot Law. Besides a presence on social media, the group now has an interactive website, a smartphone app and video counsel.

In May, Barefoot Law won an award from the Uganda Communications Commission. It includes a cash prize of $10,000, which Abila says will be used for operating costs and improvement of Barefoot Law’s community activities.

“Its niche is innovative broadcasting and outreach to the people through technology to sensitize the public about their legal rights and responsibilities,” he says. “I see many professional bodies drawing inspiration from that model.”