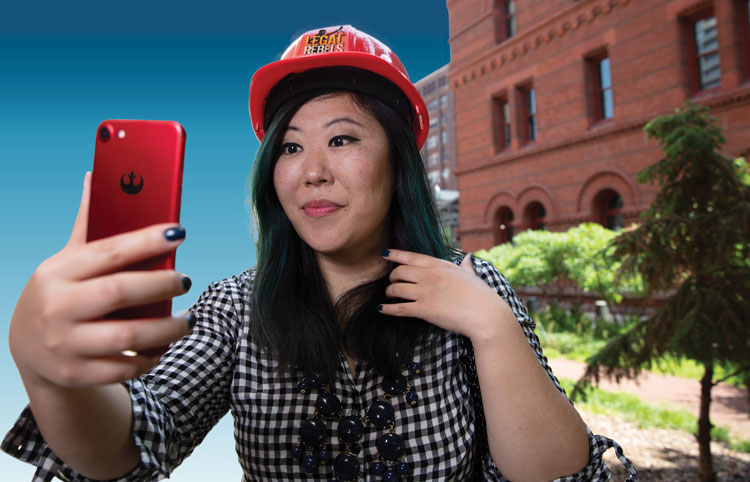 Without the braggadocio of Solo, Um believes she can translate legal business data into a story that helps law firms and lawyers better navigate a dynamic and shifting marketplace. But then, Um has been making legal information accessible for decades.

Immigrating to the U.S. from South Korea at the age of 8, she was often the translator between her family and their newly adopted home.

“I worked with my family’s lawyers since I was very young,” she says.

Since she had helped her family understand immigration and business law, she and her father thought she’d go to law school, but the prospect didn’t make sense to her.

“I didn’t like the economics that I saw for my own career going forward,” she recalls, so she skipped law school entirely. She has a bachelor’s degree in history.

This didn’t stop her from working as a paralegal and helping law firms with business operations. Ultimately, she started working with legal data by doing damage analysis.

Even though she took a brief break to be a career coach, Um couldn’t stay away from law and joined Seyfarth Shaw in Chicago in 2012, where she also worked with SeyfarthLean Consulting.

Josh Kubicki, who was the first chief strategy officer at Seyfarth and is now founder and president of the Legal Transformation Institute, stole Um away from another work group when he was building his original Seyfarth team.

“Her understanding of the business side of law was exceptional,” he says.

Part of her talent, he believes, comes from the fact that “she is not stuck in that lawyer-centric mindset.”

Um sees her lack of a legal education as a “double-edged sword,” but she ultimately believes that it is more positive than not.

While at Seyfarth, she helped 7-Eleven develop key performance indicators for its in-house real estate practice.

“Jae’s genius is that she is very good at understanding the company’s goals,” says Kristen Cook, the 7-Eleven senior counsel who worked with Um. Um’s comprehension and ability to see the big picture allows her to create a story that resonates with the executive team, Cook says.

At Seyfarth, Kubicki says, he depended on Um as a sounding board. When she left SeyfarthLean last year, “it’s like losing a co-pilot.”

Her new business is not a consulting firm but a content-focused venture that will create data-based analysis and present it in a digestible way to help law firms, legal departments and startups think about how they compete in the marketplace.

For many who have read Um’s work, the clarity and creativity in her message stand out.

“She can educate you and make you laugh at the same time, and that’s a huge asset,” says Bill Henderson, a professor at Indiana University’s Michael Maurer School of Law and editor of the blog Legal Evolution, where Um is a contributor. “It’s fresh, it’s original, it’s needed.”