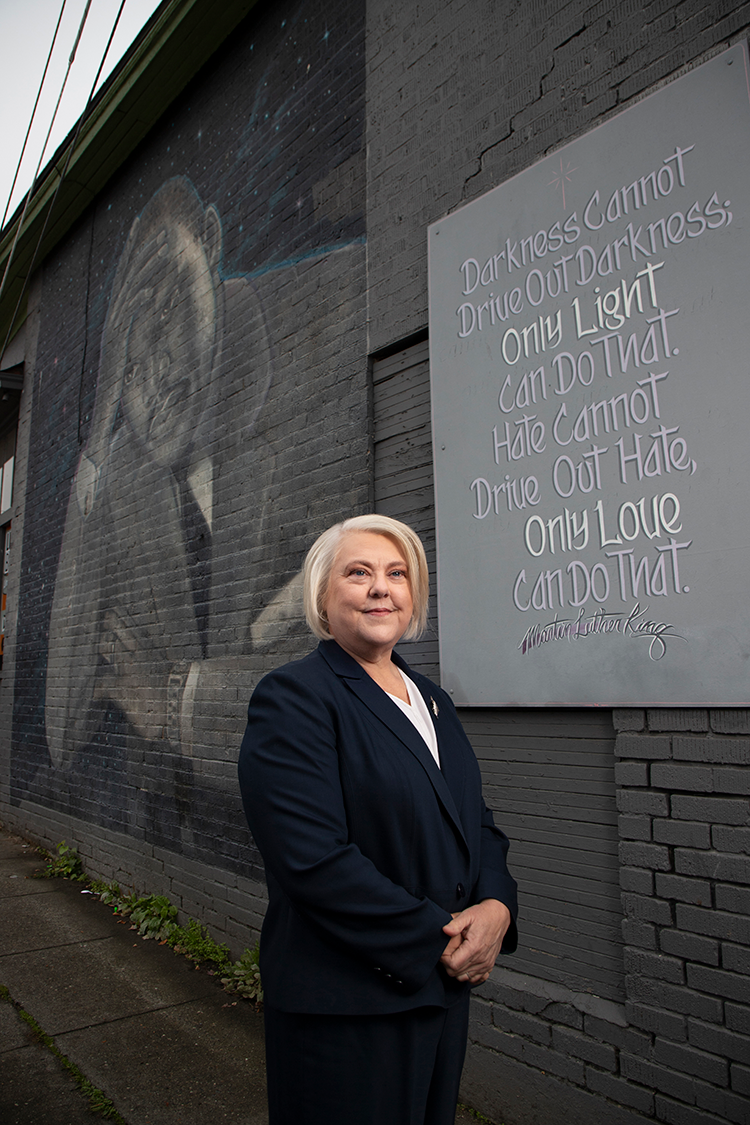 Kellye Testy is president and CEO of the Law School Admission Council. Photo by Yosef Kalinko.

In February 2020, many people didn't realize—or perhaps acknowledge—the world was entering a global pandemic. But Kellye Testy, president and CEO of the Law School Admission Council, did, and she was thinking the organization's traditional in-person LSAT might not work out.

By March of that year, the organization announced that month’s LSAT was canceled. The April LSAT was canceled, too, but during the same month, news was released about an online LSAT scheduled for May. According to Testy, the announcement about the online test, known as the LSAT-Flex, was released before the product was made.

“It was the proverbial building the airplane while you’re flying it,” says Testy, who has been LSAC president and CEO since 2017. The first online test was on May 18, 2020, and its scores were released June 5, 2020.

That was a game changer for law schools, according to deans who feared applicant pools would shrink during the pandemic. Instead, there was a 12.6% increase in law school applicants for the 2020-2021 admissions cycle, compared with the previous year. Scores went up, too. For the highest score range, which is between 160 and 180, there was a 33.7% increase.

“If we didn’t have the students, we would be in trouble. And if we had to change our admissions process, our method of analysis, in the middle of a pandemic, the admissions season would have been very hard and very risky,” says Garry Jenkins, the dean of the University of Minnesota Law School, who also serves on the LSAC’s board of trustees.

Testy wasn’t expecting perfection with the remote exam; health and safety were the top priorities. She also wanted something that would improve diversity for the profession. Before COVID-19, LSAC had made progress on that front, Testy says, and it didn’t want to lose that during the pandemic.

The organization decided to not use artificial intelligence for test proctoring, and instead brought in the testing security company ProctorU, which provided people to monitor examinees remotely. That way, Testy says, a live person was immediately available for emergencies.

Initially, the LSAT-Flex had three sections rather than the traditional four. As of August 2021, the online test has four sections, and Testy says the remote LSAT could be here for the long term. She admits some were hesitant.

“It’s not just the idea of change; it’s about helping people feel secure as you go through it,” adds Testy, 61, who was the first person in her family to graduate from college. Testy served as dean of Seattle University School of Law from 2004 to 2009 and dean of the University of Washington School of Law from 2009 to 2017. She was the first female dean and first openly gay dean at both law schools. She currently lives in the Seattle area with her spouse, Tracey Thompson, the general counsel for the Teamsters Local 117.

Testy often asks deans how the LSAC can be helpful and follows through on their suggestions, gaining their trust, says Patricia Roberts, the dean of St. Mary’s University School of Law. “Her actions speak louder than her words,” Roberts says.