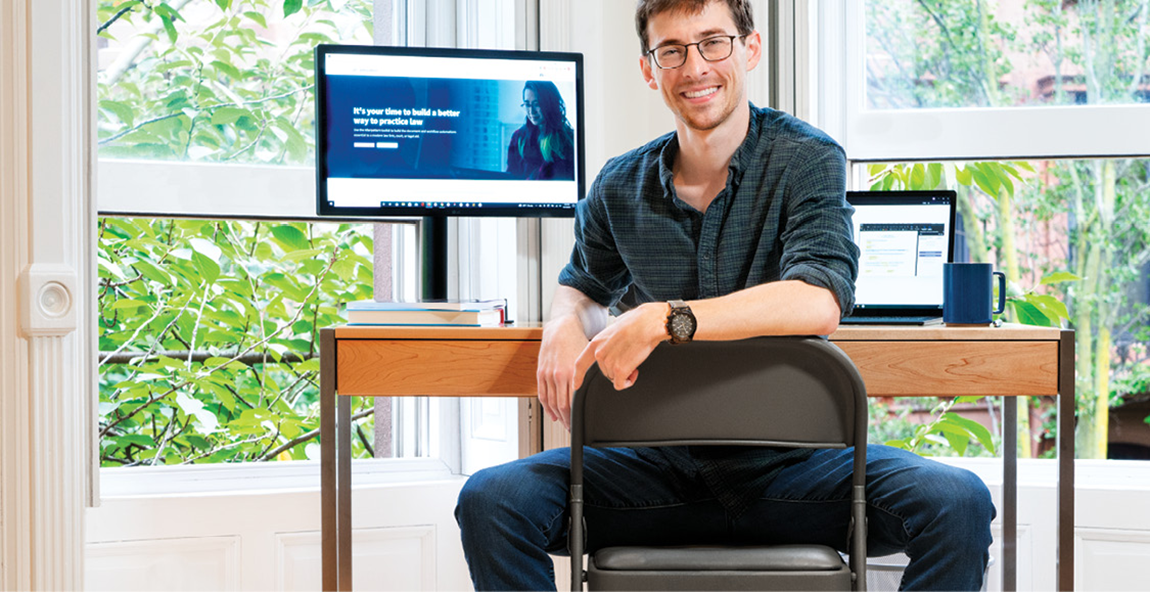 Scott Kelly who lives in Brooklyn with his wife and their 2- and 4-year-old sons. Photo by Len Irish.

Scott Kelly ended up in law in the same way a lot of people do.

He grew up near Kansas City, Kansas, and became interested in politics and influencing the world in a positive way. After graduating from Yale University in 2010 and Columbia Law School in 2013, he felt drawn to public impact litigation and worked as a legal fellow and then legal and policy associate with the American Civil Liberties Union of Pennsylvania.

“How do you use the law as a lever to directly affect society in a larger way and make things better for people?” asks Kelly, 34. “That’s how the ACLU thinks about its cases. It goes through and it says, ‘How do we change this law to help with police reform?’ Or, ‘How do we change this law to ensure that gay couples are able to get married?’ It thinks on that macro level.”

When Kelly and his wife decided to move to New York City, he realized he could also use technology to impact people on a larger scale. He discovered Blue Ridge Labs @ Robin Hood, a program that helps create and support early-stage social tech ventures to address social issues such as the access-to-justice gap. He hoped to apply his legal experience and was accepted into the 2016 class of fellows. That’s where he met Thomas Officer, a Scotland-trained attorney with experience in product design and front-end development.

They worked with other people in the program to build Community.lawyer, which created marketplace technology that bar associations and legal incubators could use to accept and administer referrals to lawyers. About 40 organizations, including the Chicago Bar Foundation’s Justice Entrepreneurs Project, continue to use the platform.

“You can write a line of code or several thousand lines of code, and that same code can be used by an unlimited number of people,” Kelly says. “I think the same thing that appealed to me about public impact litigation appealed to me about building tech products. And actually, you can see the effects of the work you’re doing much more directly when you’re building a product.”

The Community.lawyer team also was interested in building technology to help attorneys share information and leverage each other’s expertise, Kelly says. In January 2019, the team launched the initial beta of Afterpattern, a “no-code” platform that allows law firms, legal aid organizations and courts to create their own document and workflow automations. In addition to offering how-to tutorials and resources, they give clients access to a free marketplace where they can view and duplicate apps and tools from around the world.

The company was renamed Afterpattern in January 2021, and according to Kelly, it has thousands of users who have created apps that have been accessed more than a million times.

Greg Siskind, the founding partner of Siskind Susser, an immigration law firm in Memphis, Tennessee, was an early adopter of the platform. He has built several apps, including the Public Charge Advisor, which helped lawyers determine whether their clients were subject to a Trump administration regulation that made it more difficult for immigrants to obtain legal status if they used food stamps or other public benefits.

“I took this 300-page regulation and built an app using Afterpattern that took a person through each of the criteria and then gave them an assessment at the end of whether they were likely to have a problem,” Siskind says. “That was something that was highly useful, and we did it as a pro bono app, where we just put it out there because it was good for the public.”

Ben Jackson, the co-founder of ImmigrationHelp.org, built the nonprofit web app on Afterpattern to provide free immigration form preparation services to low-income applicants. Since its launch in May 2019, he says his team has helped more than 9,000 people check their eligibility for immigration statuses and prepared more than 300 applications.

“One of the things I love about Scott is that he started Community.lawyer not because he was motivated by the profit potential, but because he really believes that legal services should be delivered in a different way, that it should be simple for lawyers to build things that they’re interested in and take their ideas and make them a reality,” says Jackson, who is based in Boston and first met Kelly at Blue Ridge Labs.

Kelly, who lives in Brooklyn with his wife and their 2- and 4-year-old sons, announced in September that clients could now build their own legal practice management system on Afterpattern, either from scratch or using its templates.

In November, Afterpattern was acquired by cloud-based document and email management service NetDocuments.