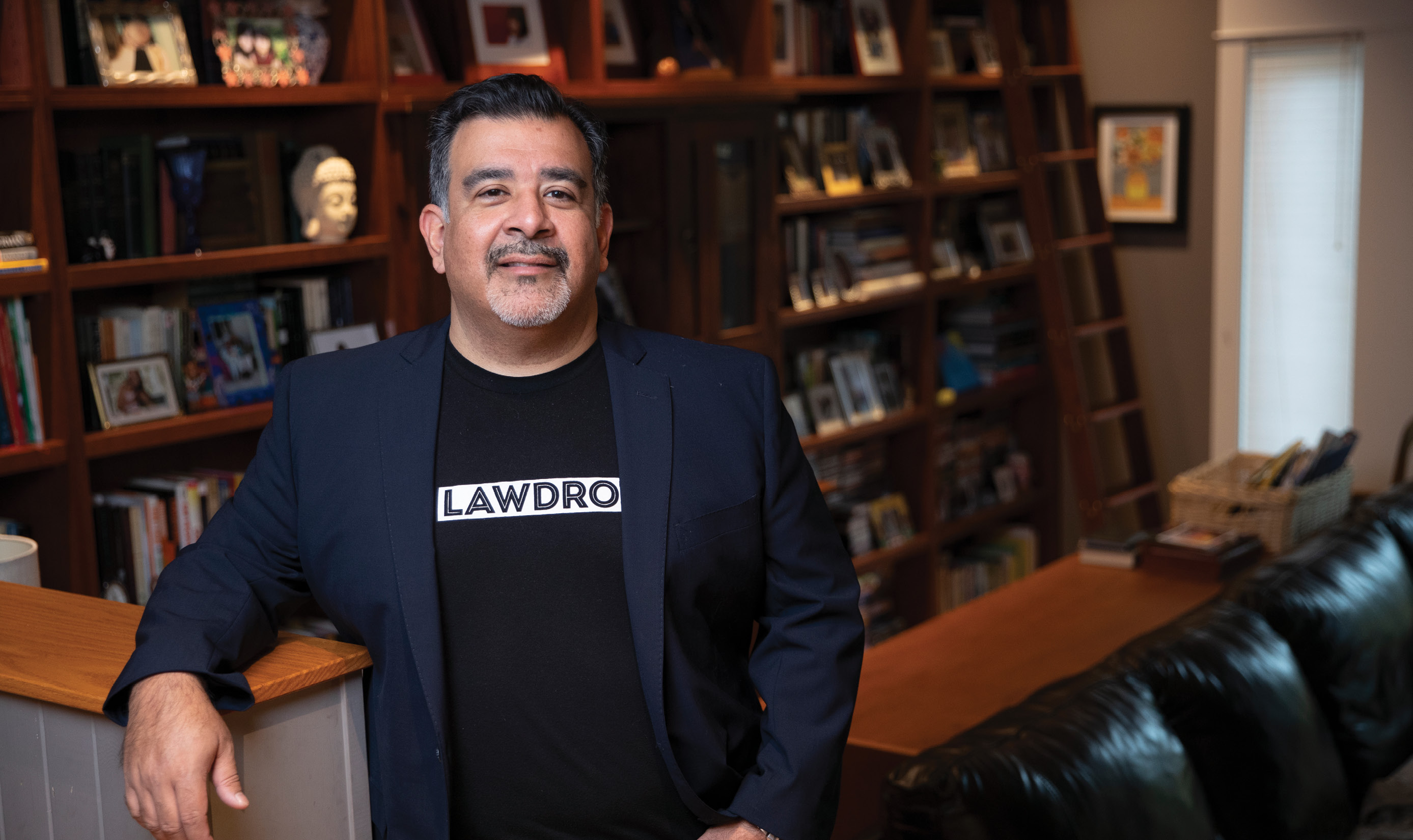 Tom Martin is the creator of LawDroid Builder. Photo by Yosef Kalinko.

Tom Martin graduated from Yale University with a bachelor's degree in philosophy in 1993 and started working for an "old-school" Harvard Law-educated attorney who ran his own practice in Los Angeles.

Martin served not as a legal assistant, but as an “aide-de-camp.” After the attorney wrote letters longhand on yellow legal pads, he would give them to Martin to make his revisions with a red pencil. They went back and forth for a couple days before finally sending out finished versions.

“I thought, ‘Hey, things need to change with this model,’” says Martin, 50, who later graduated from the UCLA School of Law in 1997.

Martin had always been interested in technology, becoming enthralled with the Apple II computer and Atari 2600 video game console as a kid growing up on the east side of Los Angeles, and he wanted to look for ways he could use it to improve the practice of law. After a short detour into the film industry, Martin joined toxic tort litigation boutique Metzger Law Group. In 2006, he opened Foresight Legal Group, which he describes as one of the first virtual law firms in the country. In an early project, Martin partnered with LegalZoom to launch a pilot program that provided online prenuptial agreements to hundreds of clients around the country.

Six years ago, Martin read an article about Joshua Browder, a Stanford University student who created the legal chatbot DoNotPay to help motorists challenge their traffic tickets (and later was named a Legal Rebel in 2017). He was inspired by Browder’s idea to automate conversations that would’ve typically happened with a lawyer, and he decided to expand it in his own work. In November 2016, he started LawDroid, a bot development and consulting company for the legal industry, and he launched an app for Facebook Messenger to help individuals generate California business incorporation documents.

The following year, he created Larissa, an experimental talking bot that answered general questions about divorce using natural language processing. He also began working on individual projects for legal aid organizations, such as the Tennessee Alliance for Legal Services and Colorado Legal Services, as well as for ARAG Legal Insurance and law firms worldwide.

“Most other industries have already incorporated some type of intelligent automation, but the legal industry is getting there,” says Martin, who now manages his eight-person team remotely from Vancouver, British Columbia. “It’s a way of eliminating the purely one-to-one relationship and making it a one-to-many relationship where you can help thousands of people simultaneously and address the access to justice problem around the world.”

In 2018, Martin helped Patrick Palace, the owner of Palace Law, a workers’ compensation firm in University Place, Washington, create PatBot, a free resource for injured workers who need to identify their legal issues that provides information about their rights and remedies.

“Tom helped us connect with all of the people who desperately needed legal services but either didn’t want to contact a lawyer or didn’t think they could afford one,” says Palace, adding that he introduced a new version of PatBot in December.

Martin used what he learned through his bespoke projects to create LawDroid Builder, a “no-code” software platform that allows legal organizations to design custom chatbots to intake clients, automate documents and assemble digital tools. He says the purpose of the software platform, which launched in April, is to assist people who want to develop their own automations to solve legal problems, thereby promoting justice anywhere.

When asked about his motivation to increase access to justice, Martin explains that he doesn’t want to forget where he started. He credits his Latino and Indigenous roots for giving him a unique perspective on life and an appreciation for how important it is to make the law and technology more accessible.

“I think a lot of people talk the talk about access to justice, but I really do want to make services easier to understand and to use,” says Martin, who serves as secretary of the Group Legal Services Association, an organization affiliated with the ABA that aims to advance access to justice through legal services plans and collaboration with the industry. “I think that from what I’ve done through this company, I have walked the walk. I hope that it’s been a contribution to people that has bettered their lives.”

In his free time, Martin enjoys playing guitar and traveling with Miriam, his wife of 23 years, and their two daughters, Julia and Maya.