For Linda Alvarez, ‘Attorney’ Doesn’t Have to Equal ‘Adversary’ 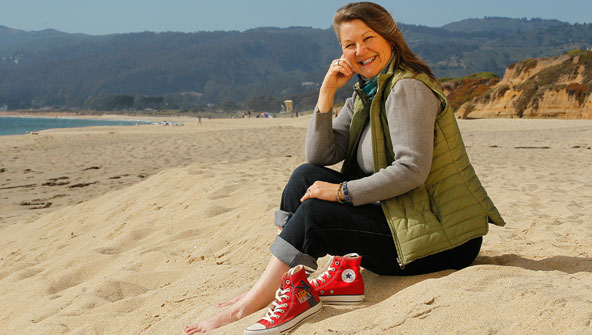 In contract dealings, attorneys are the advocates, the fighters, the protectors. In fact, most U.S. lawyers pride themselves on their zealous advocacy for clients as they tangle with the bad guy sitting across the table. For solo practitioner and business consultant Linda Alvarez, the traditional adversarial process simply doesn’t work.

“Contracts are meant to bring safety and predictability so clients can move forward with reasonable assurance,” says Alvarez, 54, who practices in Half Moon Bay, Calif. “But from the start, convention sees the parties as adversaries—opposite sides working against one another. It doesn’t make sense to me on a fundamental level.”

In contrast, cooperation has been central to Alvarez’s career for decades. She produced and managed theatrical and media productions across the country with her husband for 20 years before she attended law school.

In the aftermath of the Sept. 11 terrorist attacks, Alvarez was drawn to the teachings of Mahatma Gandhi, Martin Luther King Jr. and Nelson Mandela, all passionate proponents of powerful forms of nonviolent activism. But no matter how closely she explored their doctrines, she couldn’t find a way to apply them within the confines of a large law firm.

Then one day while driving to work, Alvarez found herself wishing for a small fender bender and just enough injury so that she wouldn’t have to walk into the office. She told herself, “Oh my God, I can wish for something better than that!”

Soon after, Alvarez left her practice and accepted a position as a business consultant for Irish poet and philosopher John O’Donohue. When O’Donohue died in 2008, it became apparent that many of his business relationships needed to be shored up with more formal agreements.

“I had a choice,” Alvarez says. “I could have sent a typical nasty-gram and shut down those actions, but these were people John loved and who loved John. I had to find a way to powerfully address the harm that was being done to John’s rights and at the same time honor and preserve these essential relationships for John’s family.”

Out of that need Alvarez developed a process she calls “discovering agreement.” It helps her clients design agreements that honor the needs and values most important to them, and eschews traditional dispute resolution tactics to create a custom, legally binding system of resolving conflict.

At the onset of all negotiations, Alvarez clearly expresses her expectations for a successful client-attorney relationship and requests the same information from potential clients. Her engagement letters include clauses designed to ensure that one party doesn’t gain at another’s expense, and that conflicts are addressed without resort to coercion or manipulation.

“We build into the contract a dispute resolution process that is grounded in our agreement—what we share, value and need. So that if we find ourselves in disagreement, rather than making the contract a weapons cache, we’ve designed our own system for resolving conflict: a system focused on restoring agreement quickly and preserving the core benefits that were the reason we joined forces in the first place,” Alvarez says.

“She’s completely revolutionized the way I approach someone I want to sign a contract with,” says best-selling novelist Deeanne Gist, who has used Alvarez’s methods to vet agents and publishers.

“When I asked why they do what they do and what type of legacy they wanted to leave, they looked at me funny,” Gist recalls. “But those answers tell you what kind of a person you are dealing with and the driving forces behind the decisions they are going to make.” As Alvarez says, “Finding ways to join forces with others and—together—design sustainable, beneficial and enjoyable relationships and enterprises is better than approaching deal-making as an encounter between opposing forces seeking to win an advantage, one over the other.”