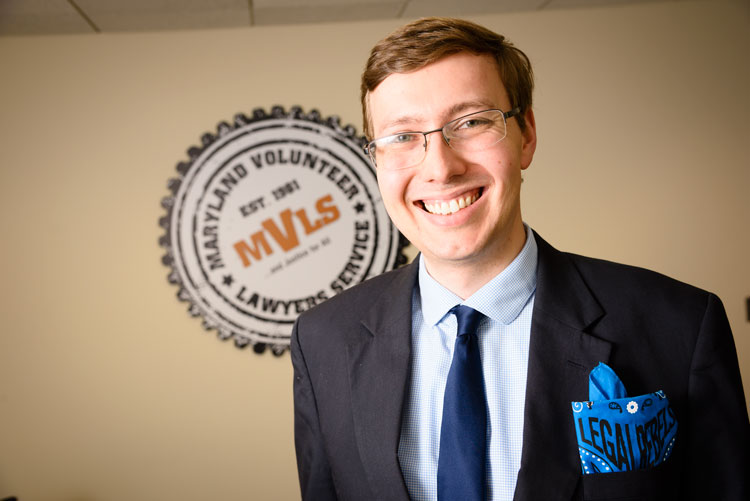 Matthew Stubenberg’s legal career is shaped by the Great Recession. In 2010, he started law school at the University of Maryland, where he “fell in love with criminal defense.” However, upon graduation in 2013, the legal market was still recovering, and he was without a job. That was when Stubenberg learned how to code.

In the Circuit Court for Anne Arundel County where he clerked, lawyers were expected to bring paper sheets with judges’ information, including phone and chamber room numbers. In response to this antiquated practice, he learned the programming language Java and created Not Guilty, a smartphone app that digitized the paper sheet and added biographical information.

While popular at the time, the app is defunct as Stubenberg tackles bigger projects. Now the IT director at the Maryland Volunteer Lawyers Service, a Baltimore-based legal nonprofit, he creates scalable solutions to chronic problems faced by underfunded legal aid and criminal justice programs. Since 2015, Stubenberg has operated the website MDExpungement, which informs a user whether their case is expungable and auto-populates appropriate court forms. The tool has created more than 33,000 expungement filings and generated enough filing fee waivers to save Marylanders $756,600, he says. And to improve the efficiency and scope of MDExpungement, he created a database from public court documents retrieved through the state judiciary’s clunky Case Search website. With 7.5 million civil and criminal cases that date back to the 1980s, the now stand-alone project is called the Client Legal Utility Engine.

Stubenberg says CLUE allows his organization to understand the totality of ongoing and historic legal issues faced by a client. This database, which Stubenberg shares with partners such as the Baltimore Sun, is now used for more than client intake.

Melissa Rothstein, director of policy and development at the Maryland Office of the Public Defender, recently tapped Stubenberg and CLUE to assist with bail reform work.

“Matthew has particular and unique knowledge,” Rothstein says. “We don’t have these skills in-house and haven’t seen these skills in the criminal justice context locally.”

Data from CLUE was used in a report released by the public defender’s office last year, which Rothstein says was “tremendously impactful.” The Court of Appeals of Maryland, the state’s highest court, issued a rule earlier this year that will stop defendants from being held on bail because they cannot afford it.

“I have on numerous occasions encountered situations where I knew Case Search had the answers,” Mack says. “But it would take hundreds of hours to get the information.” Now, with the right query, Mack’s staff can find an answer in a few seconds.

Even with these significant projects, there’s a resource issue that Rothstein says hinders Stubenberg’s ability to do more. In the chronically underfunded world of public interest advocacy, Mack says he wants his use of CLUE to demonstrate the importance of Stubenberg’s work, “so funders know this amazing technology exists.”